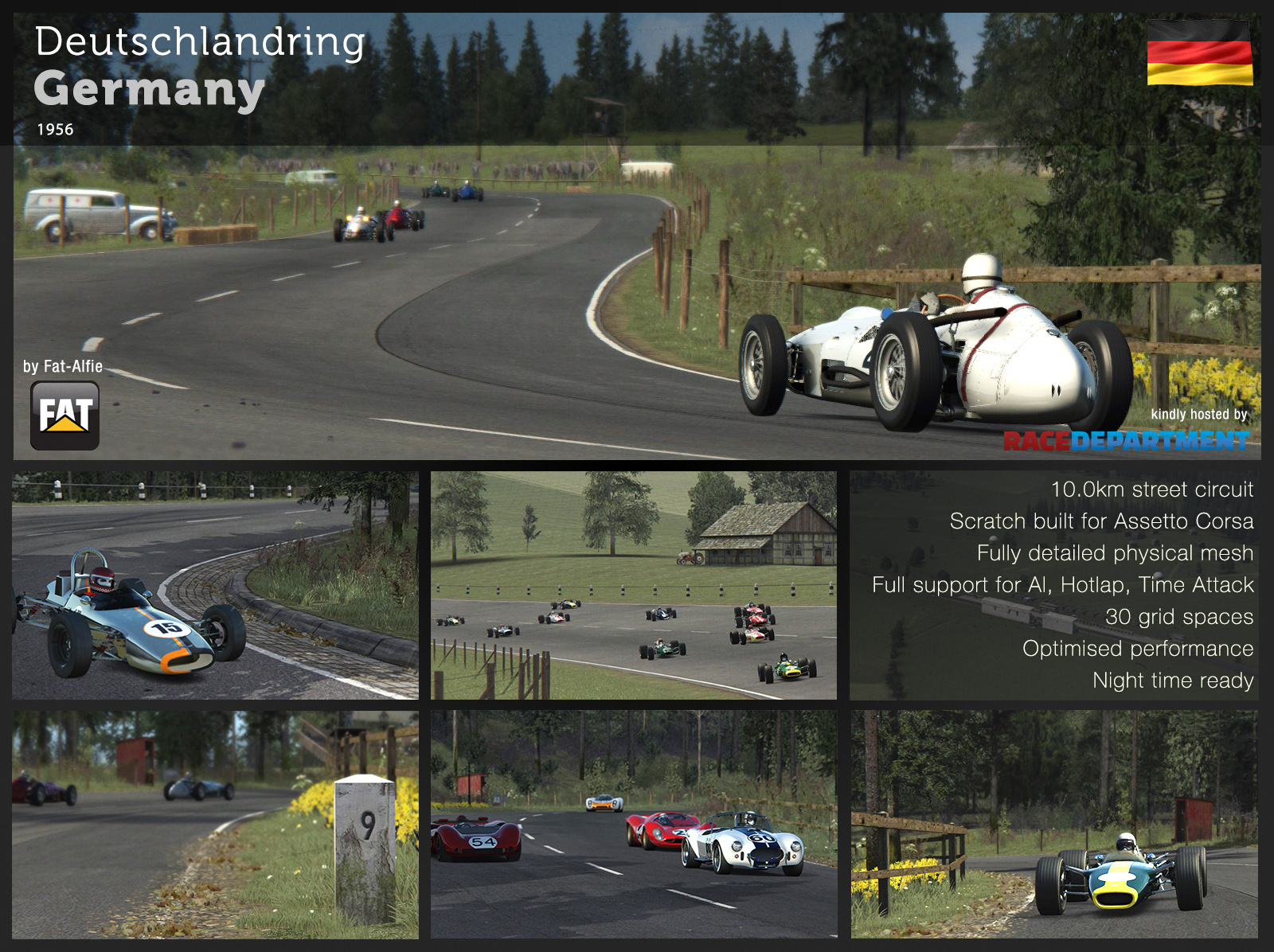 Deutschlandring - a showcase for 1930s German engineering, boasting the fastest corner in Grand Prix racing, designed to host the 1940 German Grand Prix... destined never to be used at all.

In the 1930s, the government of Nazi-Germany constructed a circuit that was to replace the infamous Nordschleife of the Nürburgring. The new track allowed for much faster speeds and, being exactly 10km in length, was to have much quicker lap times. This in turn meant more fun for the one million spectators for which the circuit was to provide accommodation. In those days, motor racing drew huge amounts of people. It wasn’t unusual to have several hundred thousands of spectators at a single Grand Prix. This is reflected in the Deutschlandring design. Parking space for over three hundred thousand cars was planned, all of which could leave the area within two hours, thanks to several direct connections to the surrounding road network. The circuit extended from an old hillclimb track near the town of Hohnstein, just a short drive south of Dresden, into a large oval. The designers got their inspiration from a number of legendary racing circuits around the world, including Mellaha at Tripoli, Linas-Monthléry, Monza and of course the Nürburgring. And there was no doubt that propaganda played a key role. This was to be the track to end all tracks. On April 27th, 1939, the circuit was
baptised Deutschlandring.

But ironically, the circuit experienced the same fate as the Reich from which it had sprung. After the tarmac was laid, war broke out and nothing came of racing. The upcoming 1940 German Grand Prix was cancelled, Mercedes and Auto-Union mothballed their racing cars and nobody ever raced the Deutschlandring. Today, it’s part of the public road network. 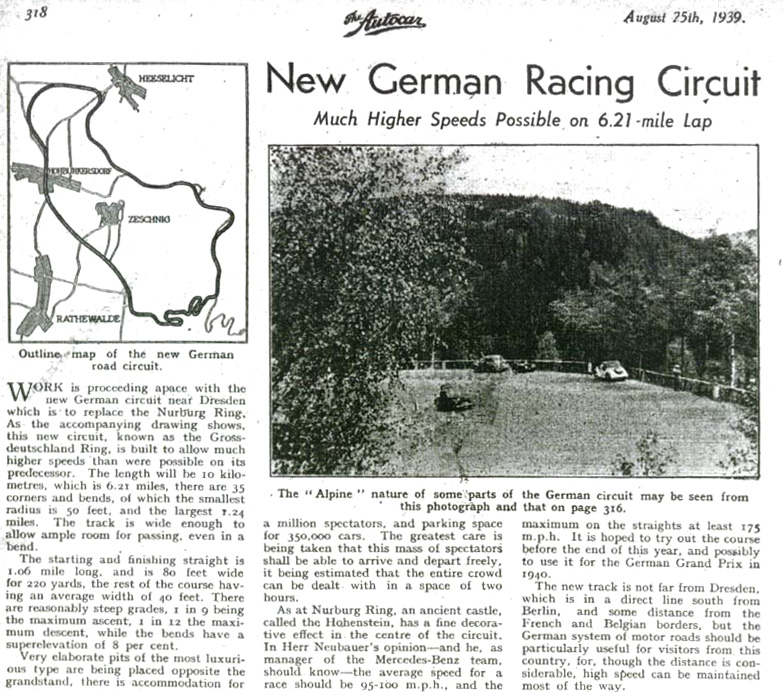 I initially started work on it back in July 2016, right after I finished work on Bilster Berg. I was looking around for something new to work on when I found a link to 'race tracks of the world', including proposed tracks, unfinished tracks, disused tracks. I love the idea of bringing something to life in Assetto Corsa, and bringing something back from the dead doubly so When I saw the layout, and read the description of how the track would have looked I was hooked! I have worked on the track for two years, on and off (releasing Feldbergring in between sessions working on Deutschlandring) and at one I seriously doubted I would ever complete it. But, after 2 years and several thousand hours of work (and 12,201km of testing!) I got it done

As the real circuit was never completed, my version obviously has to be semi-fictional (with respect to the track-side objects and surroundings), although I tried to make the track surface as close as I could to the real track (which still exists and is now a public road). I found no Lidar data, and the only DEM data I could find was of low resolution (30m) and only suitable for the surrounding terrain. The track had to be modelled using topographical markings on maps, studying modern videos of people driving around the roads, and what felt right to me.

I managed to find a few photographs and postcards of some of the more prominent buildings around the circuit, which were a big help. The houses in the distance are just plain generic houses (lifted and retextured from my Feldbergring track), and the buildings on the pit straight were hugely inspired by Reims-Gueux. I had to add grandstands, pit boxes and timing buildings, and Reims-Gueux had a very similar layout on the pit straight, and as I am not an architect it made sense to draw inspiration from real buildings rather than try to design my own. 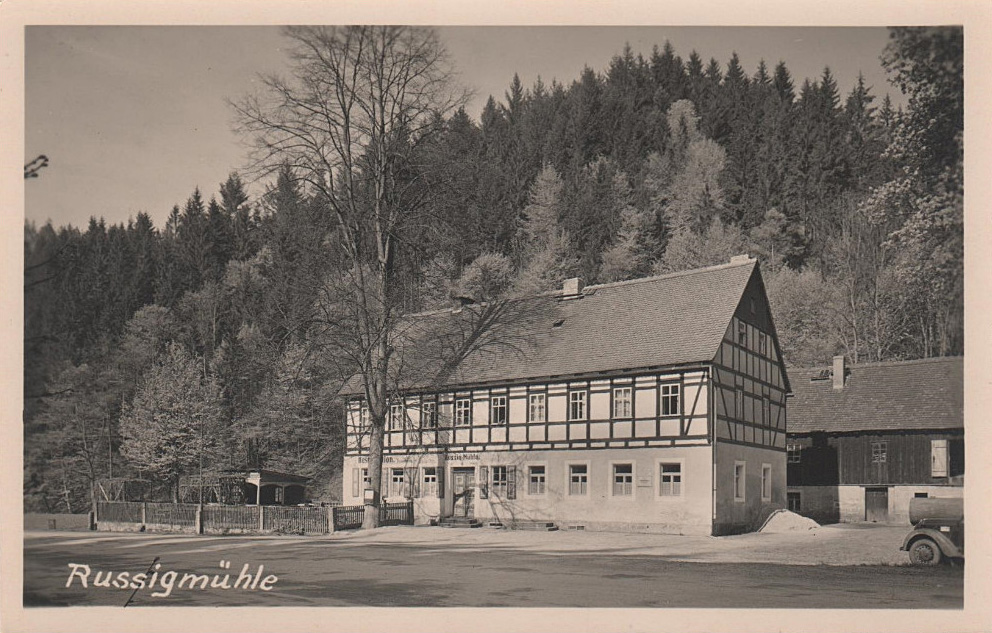 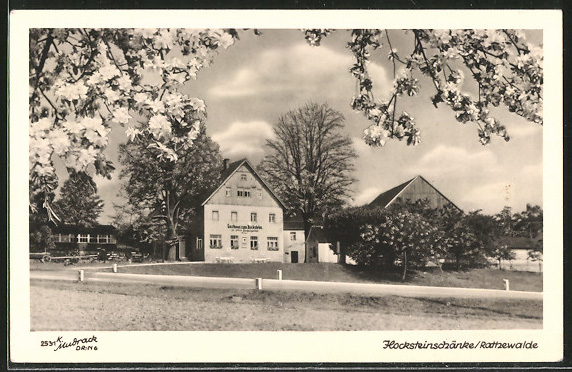 The track features a well detailed 600,000 tri physical mesh with two different types of tarmac (new, smoother and slightly grippier / old, bumpier and slightly less grippy. It is ready for AI races (with 30 grid slots), Hot Lapping and Time Attack. It has been optimised to run as well as possible (performance is at least as good as Kunos' Nordschleife), with varying levels of detail and careful use of textures and materials. I have added a dynamic racing line and tyre marks, static track-side details such as period-correct spectators, rubber debris and 3D leaf litter on the track, cattle and horses in the distance as well as a couple dynamic objects.

This track is most suited to vintage cars, but it can also be great fun with more modern cars too. The environment contains 43,200 trees (and no tree walls!), 34 different plant types, and ambient shadows added to most track-side objects.

The track is also ready to race in the dark (utilising X4fab's shader patch) although I have kept the lighting to a minimum. The close proximity of the track side objects makes is quite easy to navigate in the dark using any car with headlights.

TEXTURE ADJUSTMENTS FOR EITHER "STANDARD AC" OR "SHADER PATCH" - 22/03/19
The default installation of this track is configured for a "SHADER PATCH" set up. The textures for all camera_facing objects (spectators) are much darker to make them correctly exposed when using the current Patch. These files are also in the SOL+SHADER PATCH.zip archive.

Thank you to everyone who has helped, or tested, or encouraged me along the way - you know who you are

And a big thank you to Race Department for hosting it!

I only race in VR, so just brilliant. The detail, technical section, plus fast sections, back to back hairpins, love it.

Thanks so much will seek out other tracks of yours and support you in building more with donations.

If you could relocate the light pole that's right at the late apex on the second to last left hander before the straight it would save me a ton of carnage =)
Upvote 1 Downvote
Love your eye for details! These teracks are awesome, keep them coming! :-)
Upvote 0 Downvote
Only just discovered this track (and Fontery). So, so good. Not surprised so many race drivers died back in the day - thankfully we can experience all the excitement with none of the death!

Thank you so much Fat-Alfie, you have mad skills.
Upvote 0 Downvote
Fantastic track, so much fun to drive. Amazing work. Keep it up!
Upvote 1 Downvote
one of the best! absolutes "Sahnestück" in german.
Upvote 0 Downvote
As usual with your work, absolutely gorgeous technically and visually
What a pleasure
Thank you for this track and for sharing ;)
Upvote 0 Downvote
Read more…