No permission to download
Overview Reviews (193) History Discussion
I have been working on this track on and off for the last two years. It started off as a challenge to myself to see if I could find some real roads somewhere in the world that could give me the same buzz and excitement that the Nordschleife does. I searched through maps for several months, trying out various loops of roads that might work, when I finally stumbled across this 26km loop of real roads set in the French countryside of the Parc Naturel Régional du Morvan. 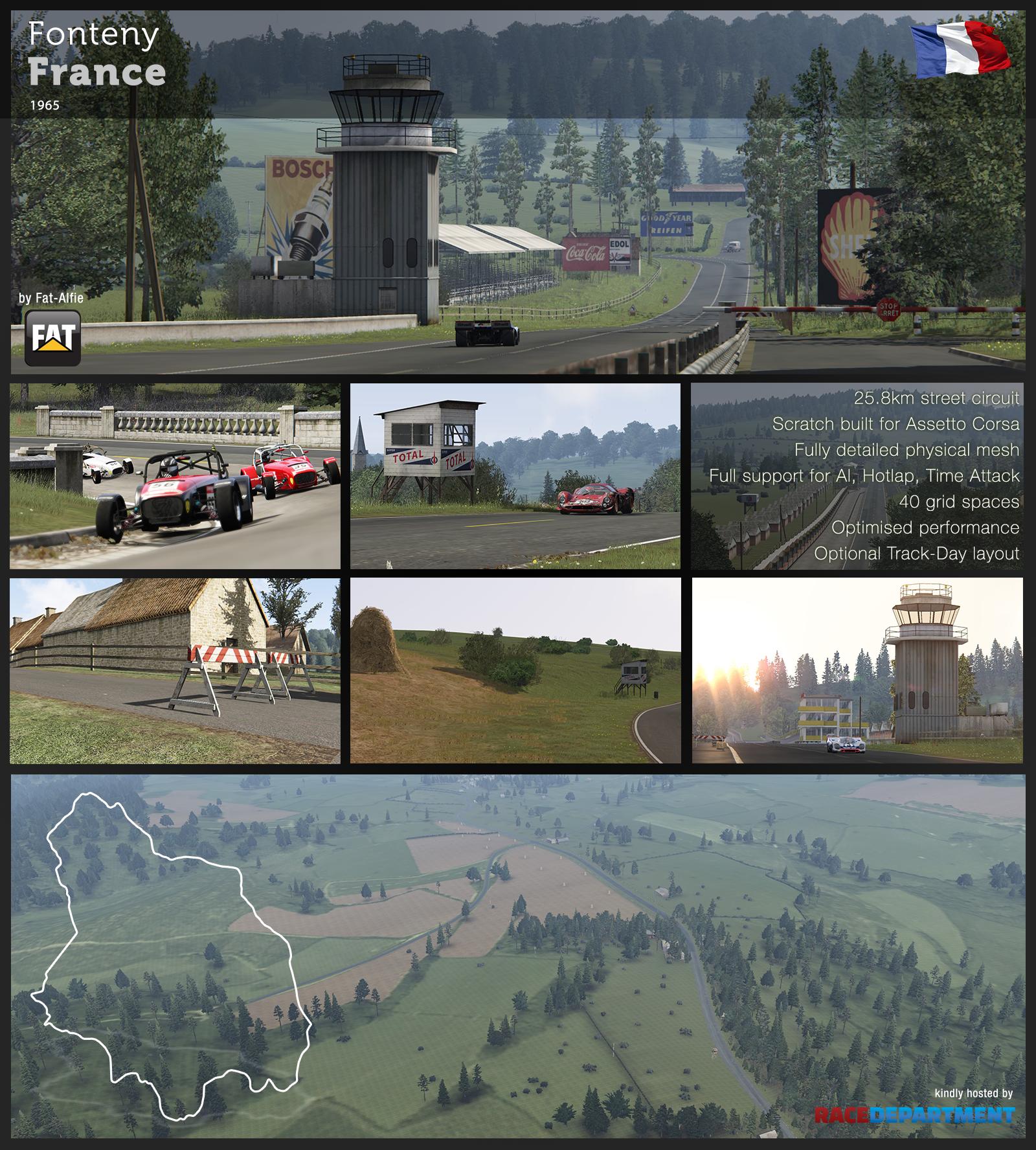 Initially I had no plans to ever release it, thinking it would be just a private project for myself. I used it in AC for quite a few months just as a simple strip of tarmac with a grass verge either side. Knowing how much time and effort went into my Feldbergring (12km) and Deutschlandring (10km) tracks, I never really entertained the idea of fleshing out this seed of an idea into a fully formed 26km long project.

After sending copies to a few friends, I was finally convinced that this track might actually be worth doing properly. I had been using it for about 18 months by this point, with around 20,000km of 'testing' under my belt. Deutschlandring was finished and released; I had no other excuses, so in May 2019 I started work on 'phase 2' of Fonteny and tried to turn this simple ribbon of tarmac and grass into a real, living environment.

After 6 months of hard work, and after adding 100,000 trees, 1000 buildings, 200 vehicles, numerous types of grass, ferns, shrubs, bushes, flowers, people, horses and cows, it is finally complete - or, as complete as it is going to be.

It is set up with 40 grid slots for Race Day, 60 spawn points for Track Day layout (multiplayer only), 2 sets of cameras and an overlay with the section names to help memorising its 83 bends.

To install, just place the 'fonteny' folder from the .ZIP into your 'tracks' folder in your AC directory.

There is a PDF track guide inside the track folder, with a brief description of each section of the track, how it got its name, and a few tips on driving the circuit.

A big thank you to those members who helped with testing, and thanks to the AC community for its continued support of mods

Never saw an optimization work like that. It's beautiful, and I have 120-130 fps. Even on Kunos track I never have more than 70
Amazing Track!
Amazing Track! I made a video about Fontany:
https://youtu.be/ovlBc2Ag3Qw
This is masterpiece. Thank you so much.
This is the most beautiful track I have raced on. Even the official tracks aren't that detailed. Truly one of the best mods.
In 9 years of simracing this is the most fun I've ever had on a mod track. Simply amazing, super detailed and makes the nordschleife look like easy mode. Grab any car from the 40s-70s, one that you need to play with the balance and weight transfer and this track is truly unmatched. I can't get over how fun this is. All of your tracks are amazing but this one is just top tier.
All your creations are remarkable and particularly Fonteny. I appreciate the richness of the details of the environment and of course the quality of the road. Well done.
Amazing track, thank you !
Love this Track.
CRACKER OF A TRACK!!!
I must say thank you!
your contribution to the community is immense. this circuit is a gem.
beyond the quality of the modeling work. the details are set to create two things:
an incredible atmosphere and an aid in reading the layout. driving pleasure on the track is instantaneous. little advice to the community. To discover these roads take the Porsche Singer 3.8L (another beauty offered). the smile will no longer want to leave you.