Codemasters have dropped the new 'Game of the Year' edition of DiRT Rally 2.0, alongside updating both the vanilla release and Oculus VR editions of the software.

Yes, VR fans can now rejoice in the glory of a full updated and content rich version of DiRT Rally at long last! The Oculus Store version of the game now comes complete will all the content and patches associated with the main version of DR2.0...

As well as a major Oculus update, players of the standard version of the title also enjoy a little update as the game reaches build version 1.13 - adding a few minor fixes as well as some small scale tweaks to the sim.

On a larger note, the new Colin McRae 'Flat Out' DLC has been made available as either a standalone purchase (or free with season pack ownership), as well as the new and fully content complete Game of the Year retail release - available for both Xbox One, PS4 and PC.

Check out the update notes and new trailer below:

If you want to know more about the pack and how you can access it, Codemasters have released the below rather useful FAQ:

Got questions? Post them in the DiRT Rally 2.0 sub forum and let the community help you out! 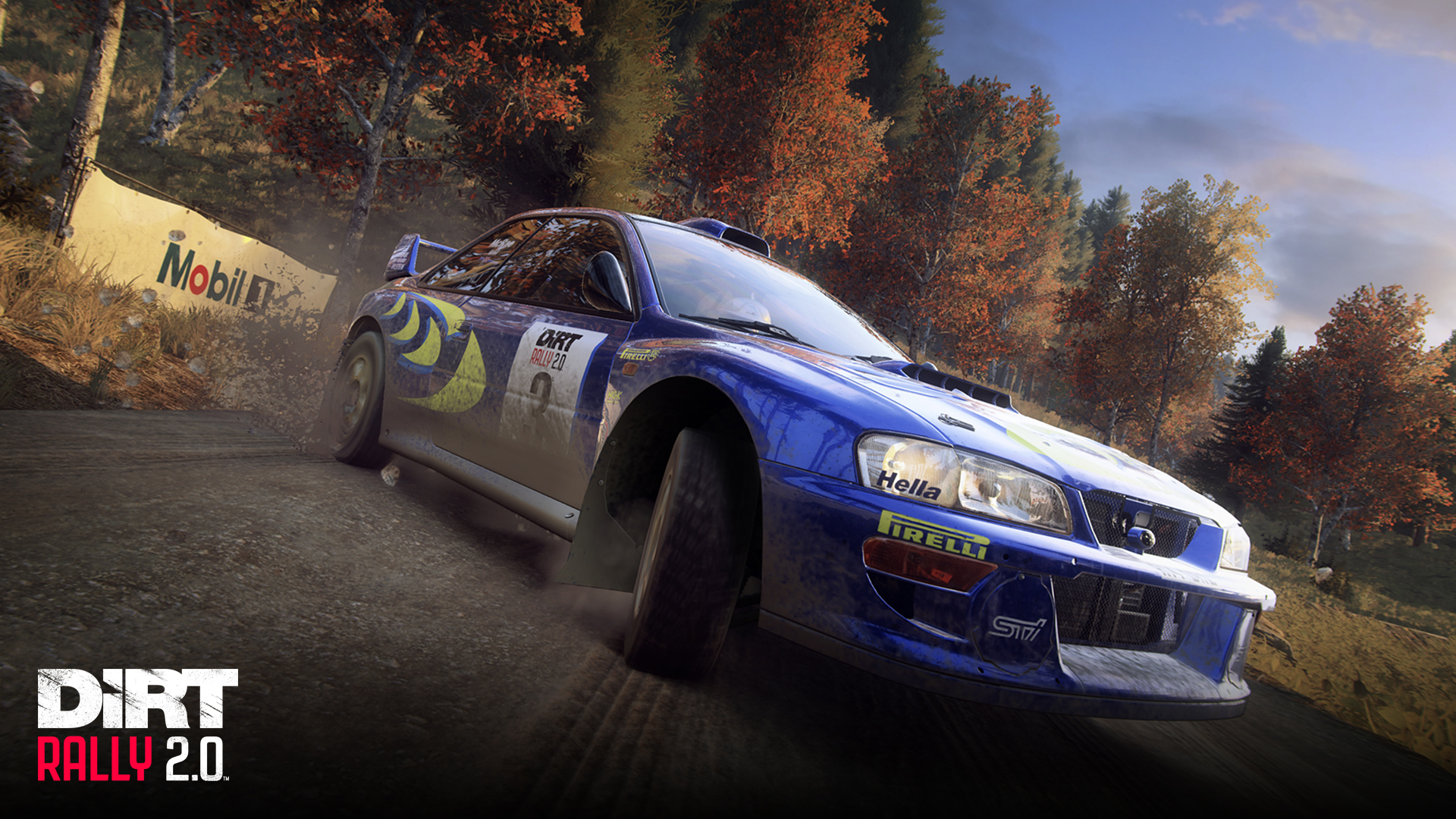 No offline mode.....no money from me.
Upvote 0 Downvote

Add some Celica's and Corolla's and i'm in ( i know Toyota is acting weirdly now how to use their machinery ) BUT STILL! Toyota! You are just shooting on your own foot!
Upvote 0 Downvote

What do you mean by "offline mode" ?
Upvote 0 Downvote

playing without being connected to codemaster's platform, i guess?
Upvote 0 Downvote

You will not get Toyota and Hyundai as they are WRC teams and will be not allowed to do that, Ford are only allowing old models, amazed the R5 and R2 are in there actually.

For me the new stages are good, very fast and mixed unlike most of the new DR2 locations which are either slow or fast with very little variety in a lot of them, Argentina is just an endless series of hairpins with very few fast sections (nothing like the real rally) and New Zealand is one great stages and one awful hairpinny Argentina one.

Legacy feels fantastic, great handling car, WRC car is nothing flash but what would I expect, the physics are probably all he same and based on the 95 car anyway, another cheap ish update from Codies, but the stages are very good.

One question, why is nearly every sodding RX events in HEavy Rain? Do these wazarks ever actually watch any rallycross? It doesn't rain that often.
Upvote 0 Downvote

Good post image choice @Paul Jeffrey (fan of Skoda)
Looking forward to try it out. At least I owe it to my HDD because of that 19 GB..
Upvote 0 Downvote

So that's it for Dirt Rally 2.0, at least as far as content is concerned. So far I had a lot of fun with this game but I also feel many unfulfilled hopes.

Very early on it was clear to me that the stages from DR1 would return, however I didn't expect them to be the highlight of a whole of two season passes. Codemasters' DLC policy will always damage the reputation of this title. I know that some things are apparently currently not possible for the team, especially licensing more than one Group R WRC car. Nevertheless, Codemasters chose the laziest (and probably cheapest) way when selecting the DLC content. I mean, Sebastien Loeb Rally Evo (a game by shovelware developer Milestone!) had a Group S DLC that included incredible cars like the Lancia ECV, Toyota 222D or the Peugeot Quasar. I'm pretty sure nobody could hinder Codemasters from making use of cars that never raced.
Last edited: Mar 26, 2020
Upvote 0 Downvote
D

Loving the new location and added cars, The Legacy Subaru is a very good handling car, and the Scottish stages are challenging and a lot of fun!
Upvote 0 Downvote
T

Lennart Groessl said:
What do you mean by "offline mode" ?
Click to expand...

Obviously to be able to play career without having to be connected to the bloody internet. If they want to avoid piracy they have to find another way. There are developers out there who make mostly simulators, and their products haven't been cracked yet and will probably never will be. I don't care about the cost, just let me play career offline.
Upvote 0 Downvote
S

I'm sure they're devastated about that.
Upvote 0 Downvote
R

A lot of good things, but the same poor traits left over from DR1, deliberately wrong notes, stupid obstructions that are there to make you crash rather than being real, finish boards made of rock, piles of gravel that take a tyre off, puncture once after hitting one yet sometimes rub the fence 4 times and not get one, just silly inconsistencies.

Plus I also feel Codies ahev tried to make this game harder than it needs to be, it is already difficult. But we have to ruin Monte Carlo b making it basically an ice rink where the only way you can push is really bty practising every stage to know where the ice patches are, whereas in DR1 it was at least fun and you could use racing tyres, now you have to use snow on every stage, the lighting is abysmal, deliberately to make it hard to see, the wipers are awful, the rain drops on the screen are the size of snow flakes rather than rain, the notes need work (although for the most part are excellent), the new locations are poor in my view layout wise, NZ and Argentina are utterly boring, offer endless hairpins and slow stages, not what anyone wants surely, and also nothing like the real rallies which offer fast and slow stages.

Good stuff, the cars are pretty decent now, the flaws in many ways of DR1 have been rectified handling wise, in all ways including WRX. And it is still a huge challenge and sometimes still fun to play, especially when you are really pushing it and getting away with murder on fast stages.

But, they will be judged on their abysmal DLC model, one that everyone pretty much as crucified from punters to youtubers. it sucks, releasing old content as DLC is borderline criminal in my view.

And as players we should hold thme to account and demand changes,
Upvote 0 Downvote

I'd be impressed if the bloody thing would run properly instead of crashing repeatedly!

Codemaster had to learn some hard lessons.
No VR, no native Oculus on Steam, no DLC on Oculus.
Different FFB, DLC fest, rehash, etc.

You know most of the angry people are those who paid full price for the deluxe version, maybe they’ll learn not to pamper publishers with easy money.

Codemaster games have a clear lifecycle, with a little patience you save a lot of money and frustrations.

Right now DR2 is refined, feature filled and has great VR support. You can buy the GOTY edition now, or wait a couple of months and get the same for 50% or less - which is a steal.

I am not unhappy with Dirt Rally 2, in the end Codemasters delivered a very good game. They’ve offered the Flat Out DLC in such a way that it is difficult NOT to get it for free, which is a way of apologizing.

OTOH there is a clear warning here that gamers do not like to be milked for every penny, even if the current business model has been emphasizing dlc sales (...lets not even discuss games as services).

We are heading into a recession that’s worse than 2008, with many people losing their jobs and although games are a relatively cheap way to entertain yourself (though the rigs to run the more demanding titles are not) they are still lower on the must have ladder like food, rent, kids, school etc.

Get your act together or people will look elsewhere for their entertainment, or at best wait until they can buy your games at high discount.

As a saying goes in my country “you cannot pluck feathers from a naked chicken”.
Last edited: Mar 26, 2020
Upvote 0 Downvote

Rob Every said:
Argentina is just an endless series of hairpins with very few fast sections (nothing like the real rally)
Click to expand...

It's the way that particular stage is IRL so the "nothing like the real rally" remark is moot. The problem lies in that the real rallies use many different unique stages around the regions while they chose to model one stage for each country in DR1/2 and that obviously means less variety.

There are bad notes in there but to say it's deliberate is just delusional.
Upvote 0 Downvote

The new location is a blast, long fast sections through the scottish woods...awesome!
Codies made a masterpiece with that one, no doubt about it.

There will always be people who find something to moan about, welcome to the year 2020...
Upvote 0 Downvote
You must log in or register to reply here.