Never had one, and don't feel like I have been missing anything.
Wheel plate buttons, keyboard or VoiceAttack in VR seem to cover all use cases. They sure look nice and add nice touch to the rig, but not that useful once you put HMD on.
Last edited: Apr 7, 2021

For older cars there aren't any in-car adjustments to even warrant a box.

For new cars, most of the settings in sims boil down to "set it and forget it." Have never felt the need during an AC SRS race to monkey around with TC or ABS settings. G29 often has more than enough buttons even for intricate stuff like KERS, DRS, or hybrid management. Half of our sims don't even have rain or night time racing so why TF do I need to map extra buttons for wipers or lights?

The like, extremely few instances I've needed to reach across for my keyboard, it doesn't trigger my OCD or whatever because "it doesn't look aesthetically pleasing enough."

It's just an old guy flex. "Check out my sim rig that Barb only lets me play an hour a night on, isn't it great?"
G

My employer uses it to order meals, fire and hire people and sometimes to call his banker.

Otherwise it's a great accessory for simulation games, it avoids wasting time on the traditional keyboard.

Ive used a button box but since racing in VR it make no sense....

I would say for people running a complete rig which they have spend thousands of euros for - its for sure a must have.
For the rest of us ... more or less waste of money.

If you like Button Boxes, you will love this one: Simulator Controller on GitHub
C

Since getting a Stream Deck and a mount for a 10 inch tablet, any desire for a button box has gone. I want to be able to customize what I have.

for most it's al just a thing of looks nothing more, i have a buttonbox, steerinwheel and streamdeck but i only use the streamdeck because of it's ease of use.
K

I'd rather spend my money on something else. I have a Fanatec clubsport F1 wheel with plenty of buttons that let me control the more important stuff (like brake bias, TC, ABS, etc.) and I simply use my keyboard for less important functions. (The only problem is remembering which button is assigned to a specific use depending on the sim. I need a diagram for each sim...)
P

ATM I don't have a single button or paddle on my steering wheel. Barebones OSW. So my DSD Trackboss that I was fortunate to win in a race almost a decade ago is more useful than ever. And it will continue to be that way, as the rims I have to revive are Fanatecs with not much buttons or knobs in them to completely get rid of the box.

I never got one. For most cars, I can fit most things I use into T500. In Assetto Corsa for example, just few cars cause problems with the buttons, modern formulas etc.

Smartphone would work I guess, but not in VR. I guess if the buttons are big enough, they work in VR
Last edited: Apr 7, 2021

Crilin said:
For me it's extremely usefull.
I have a small but amazing IRBlackbox V2 and I can't imagine to race without it: View attachment 462471
It allows me to have 20 butons in 6 x 10 cm.
Click to expand...

How did you get this little beauty?
M

I prefer that I have anything I need to have while racing is on the rim so I have rims that cater for that.

Having said that, there are lots of things that I would like to control more easily so I have a button box and a tablet with streamdeck 'like' software called touchportal. I race in VR and I do not have a monitor on my rig, it's off to the side so not the easiest to use.

Inside VR the tablet is not the best so I map things I dont need to use while racing. On the tablet I have icons for loading my software, e.g. simhub, crew chief, motion platform software, simucube. Buttons for launching individual sims etc. I find it is great to turn on the computer, hop in the rig and press a few icons to get it all loaded up.

On the tablet I have menus that comprise of obscure things like moving seat position so all the games binds are only a touch or two away.

Once the headset is on the tablet becomes less useful and I use the button box which is a TM warthog throttle. For anyone familiar with HOTAS, they are designed so that you dont need to look at them to use them. Out of all of the buttons, there are 19 which are usable without looking. Things I can add to those that are useful are on one hat I have volume for game, on another hat I have volume for both discord and crew chief. Pit options can be added there, controlling the speed of my fans (which are essential for VR to keep cool for me)

I find the warthog throttle great for VR and little known generally. What we have is a BB that was designed specifically for the job of interacting without looking but also one available to us at a reasonable cost. It really is very good when in VR you can use many buttons in a split second without 'feeling' for them.

I tried using voice but being a kiwi and having fans running it's just not reliable and there is nothing more frustrating than saying the same thing 5 times and having CC tell you he cant understand you.
S

Touchscreens require attention even if you run monitors. In VR they make no sense at all, you have no idea what you are pressing due to lack of tactile feedback.
I use bbox for controls that are usually not directly driving related, like changing chat volumes (spotter, team) or mute some blabbering driver, re-center VR and that kind of stuff. Considering the price I got my DSD bbox for it doesn't seem expensive at all. Main controls are on the wheel obviously.
Another use case is ovals, I don't have any buttons on my oval rim so bbox helps out there as well.

As a full time VR user, a button box is helpful and necessary for me.
Also in classic cars. If u use a wheel without buttons, you still have to cycle the hud and make adjustments in the pit menu for example.... Ignition, Starter, Lights etc.....enough to make a button box necessary for me!

Buttons are fun. Tried buttons on a tablet first but did not like it. 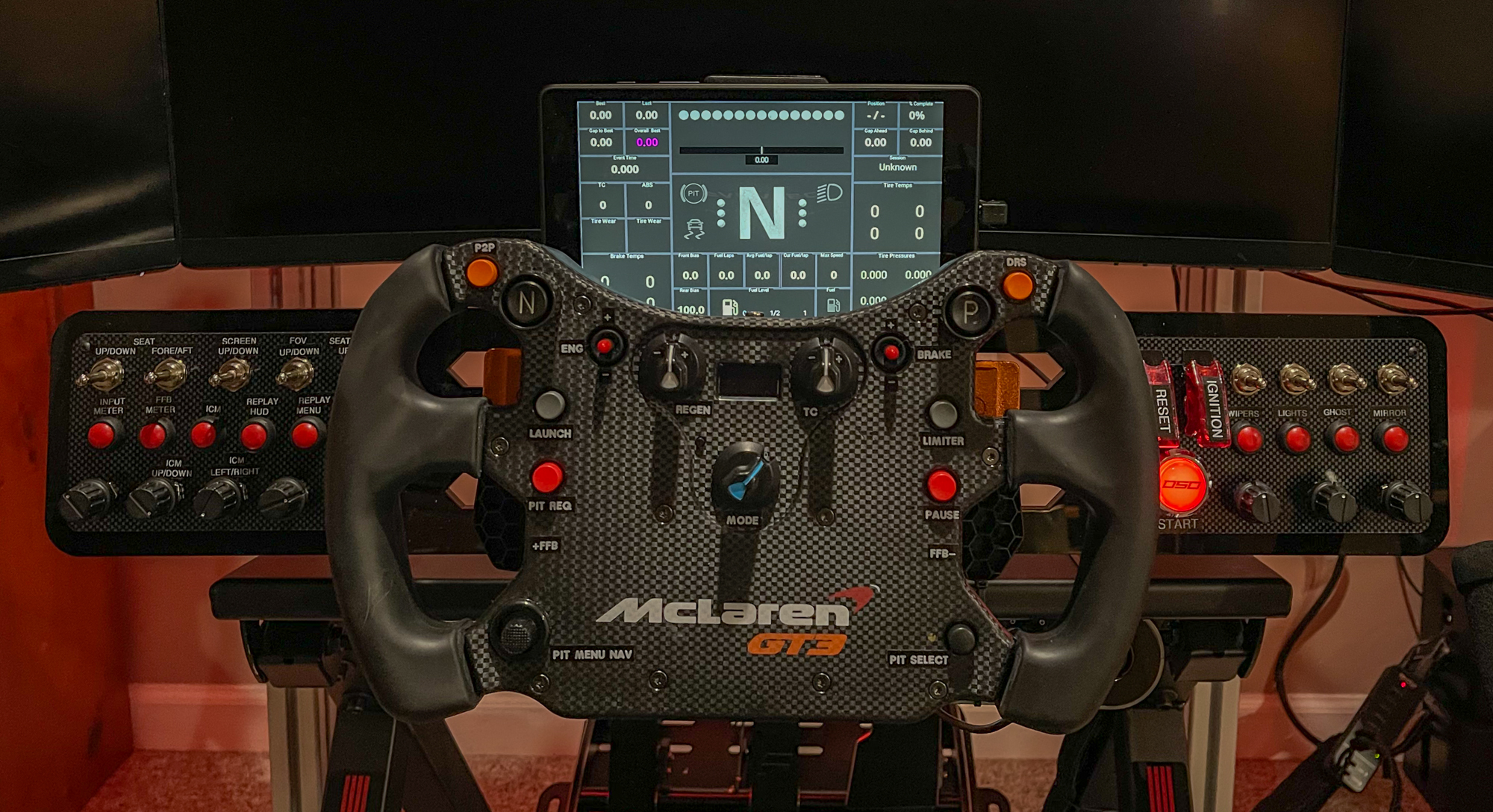 Noctam said:
How did you get this little beauty?
Click to expand...

I purchased it to SimRacingThings. Recently they have grown and have started a new project at "https://mkrthings.com/".
The man who designed it is called Sergio and provided me an excellent customer service. Maybe you can contact him in twitter: @ThingsSim

I use a Logitech Extreme 3D Pro as a handbrake. It has lots of buttons and the throttle axis that I can use as a makeshift button box.
Last edited: Apr 7, 2021

I would prefer VR with some haptic glove , or something along those lines

but definitely more fun / immersion then ipad
B

I built this one and love it... Works great on any sim... Mind you even building it myself still costs at around $100
You must log in or register to reply here.

A
Do You Use A Button Box?

Front-mounted button box suggestions for WRC wheel to use in VR?