I'd have to say useful.
With all the buttons to map in a current race car, how could it not be useful in simulation?
Reaching over and pushing a clearly labeled button rather than trying to remember which one does what on the wheel, has to be rewarding.
I don't own one, though I purchased a Derek Speare 32 button controller years ago to build it.
At some point I'll finally pull that thing out of the bag and build it one day.
T

Can be useful, I often used a HOTAS Throttle as button box.

But if you use VR, looks and designs are no longer relevant for immersion at least, since you do not see any of these hardware gimkciks and wheel designs.

You either spend good money on VR, or on button boxes, I assume, not on both. Why spending on what I do not see?
S

Because if you have bbox with physical buttons you can easily find/know by the feel what you are pressing.
Well, unless it's a giant bbox where all buttons are the same.

I made one myself, super useful when you don't want the keyboard anywhere near your rig.

I like to tweak TC & brake bias mid race often, not sure why, I think it's because it makes me feel like a real man, like some super-dooper, simracing god. It's what the pros do, right?

I race in VR, but find it no probs to make my adjustments in the 'dark', that's what makes me popular with the ladies. KnowwhatImeanfellas???

For the VR guys, some time back I did try to see if I could use a tablet in VR as many have said you cant do it.

I found it actually a lot easier to use than I expected. Do I use it like this considering I found it easy enough to us? No I don't but that is because I have plenty of buttons across my rims and with my throttle.

As an experiment I found it interesting that it was as efficient as it turned out to be.

This was accomplished by having the tablet close to my rim and mirroring the tablets screen in the VR world in the same place. When I touch the tablet there is a pointer that appears on the tablet and the mirror so I know if I have not hit the button I want I just drag my finger to the right place and give it a tap. I found that with the tablet close and the mirror in VR space I would hit what I wanted most of the time with reasonably small icons.. If you want for 6 or 8 icons per screen they would be larger and I think you would hit what you wanted first try most times.

For using a button box blindly, I recommend a HOTAS Throttle with many knobs, and strongly so. I used a CH Pro Throttle. Grab it, and your fingers play on this like on a musical instrument without your eyes needing to look. And plenty of buttons!

Nowadays, the buttons on my - simple - wheel rim are enough.
Last edited: Wednesday at 23:13

I think they are really useful. I'm fact I'm about to buy one. Modern race cars have more buttoms by the day, and sims... well, simulate this, so my G27 runs short of buttoms rapidly

I bought a buttonbox for ATS and ETS2, they all get used. I use a few switches, knobs for ACC and RRE.
I like the real ignition key when in ACC. 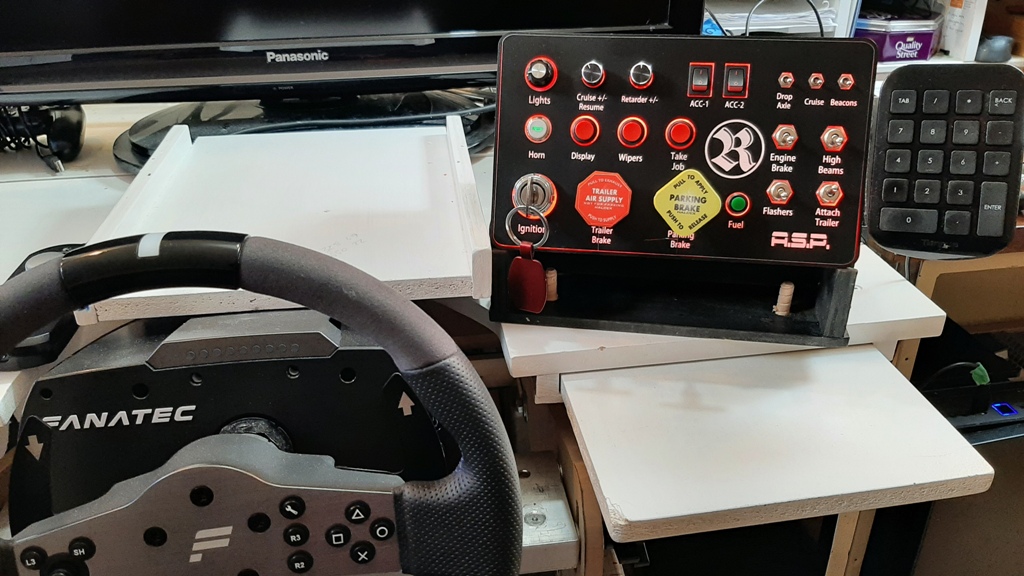 I have one of these, that I love for American Truck Simulator. I haven't used it much on any of my racing sims. I don't know how necessary they are, but they do look cool. 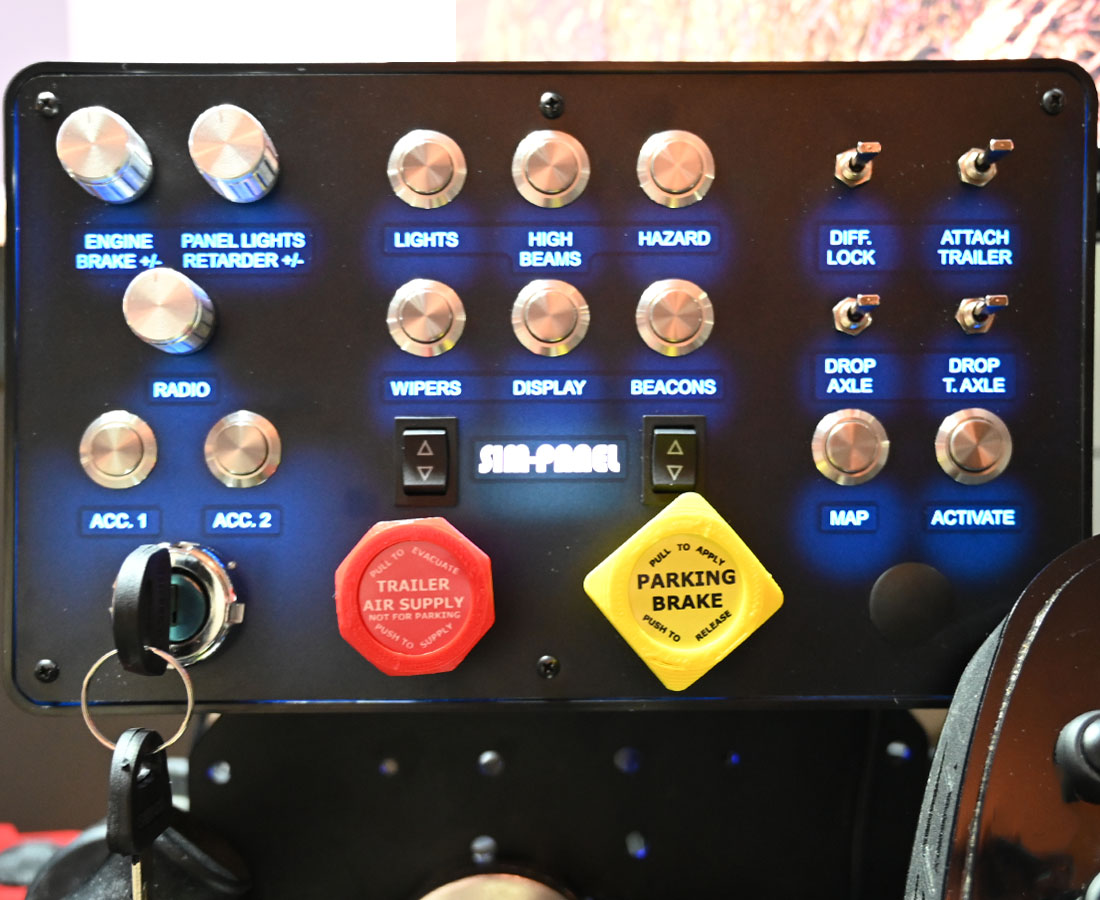 I keep hearing people talk about how buttons are no longer needed and screens can do it all for cheaper. How do you guys do that with gloves?

The most useful thing I find on a button box is rotary knobs. Brake bias, black box pages, and even audio volume are much easier and faster to adjust.

The other advantage is that with button box I am much less likely to press a key by accident, comparing to using a keyboard or using buttons directly on the steering wheel. Although I never find that the safety button cover thing helpful at all. That cover is not necessary at all except for the looks.

This is the way I solved the problem with VR. All buttons are functional including ejection seat 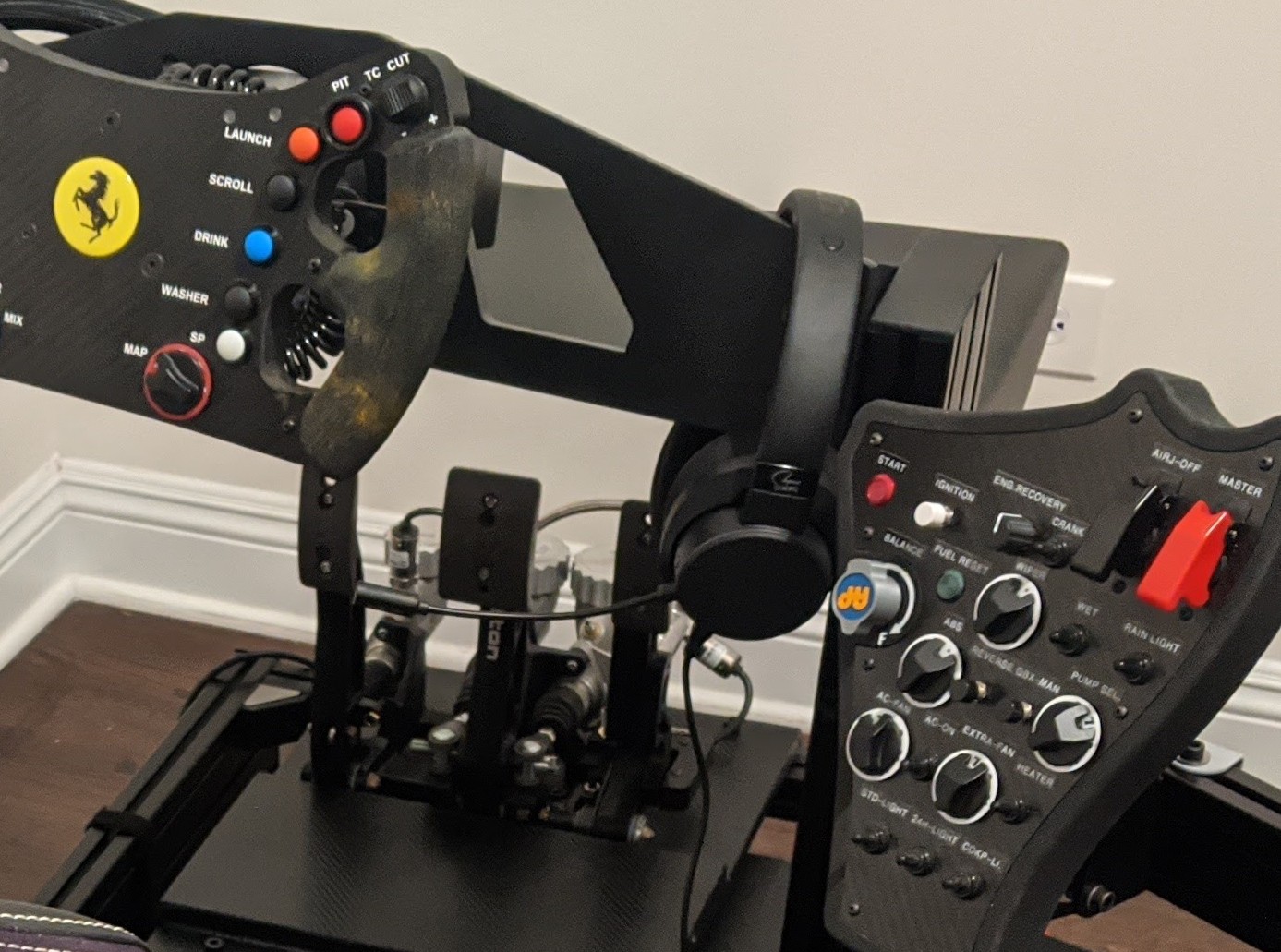 TrumpetReich said:
I keep hearing people talk about how buttons are no longer needed and screens can do it all for cheaper. How do you guys do that with gloves?
Click to expand...

If you have a quick look at the video at the top of this page you can see I am wearing sparco gloves. They made the rubberised grip on them compatible with touchscreens.

Kingkoenig said:
I'd rather spend my money on something else. I have a Fanatec clubsport F1 wheel with plenty of buttons that let me control the more important stuff (like brake bias, TC, ABS, etc.) and I simply use my keyboard for less important functions. (The only problem is remembering which button is assigned to a specific use depending on the sim. I need a diagram for each sim...)
Click to expand...

I did this in Visio for each game that I have.

At this point in time I currently have a Logitech G29 with peddles and shifter, plus two joysticks/HOTAS. I play ATS/ETS2, plus other sims that involve tractors or space, and expanding out to F1 2018 and AC.

While playing the trucking games I do have a good number of buttons on the steering wheel mapped, yet l would prefer a button box, such as @PeyePete and @Copef1 to add to the realism, along with a shift splitter. In the flight/space sims I have the most important things mapped to my joysticks, yet the bbox would add a nice touch. In FS 19 the steering wheel buttons just get to cluttered, and it would be nice to look to the side and see what state a button is in, or just flip one based on how it is labeled.

I am expanding out, and trying new sims, such as F1 2018 (got it as part of a Humble package years ago) and AC (another Humble package, just picked up a couple days ago). As I give them a try it will be interesting to see how the buttons work out for me. I tend to be the person that figures out what the best combination is for me based on my play style, and leave well enough alone. Having a bbox with a custom faceplate would be nice, as a couple people have mentioned, for like an ignition switch, maybe headlights if I am doing a 24 hour LeMans race, etc.

Tablets are nice, as I can set up an instrument panel, and just glance at it. Yes, I can customize it for buttons, and have them change their state, say from dim (for off) to bright (on), yet it that just is not the same for me.

In a couple years I am looking to build a whole new system, at that point I might just go hog wild and invest in new everything, such as Fanatec wheel/peddles/shifter, a VR headset, and either an Intel 14th generation i9 or AMD Ryzen 5 Zen 9, with a button box, only thing I would save from my current build is my seat. I hope to limit the number of buttons on my steering wheel, the acrobatics can get a bit more intense than the actual game, as you are steering and trying to hit a button, while fighting the force feed back.

I custom designed a button box that would work well in VR and I love how it works. I may be biased it is my design.

The buttons, switches, joysticks, toggles and rotaries are all easy to find in VR. I made use of edges and different controls that makes it very easy to find what in need by touch and of course muscle memory.

A Stream deck would be completely useless to me because it is featureless. 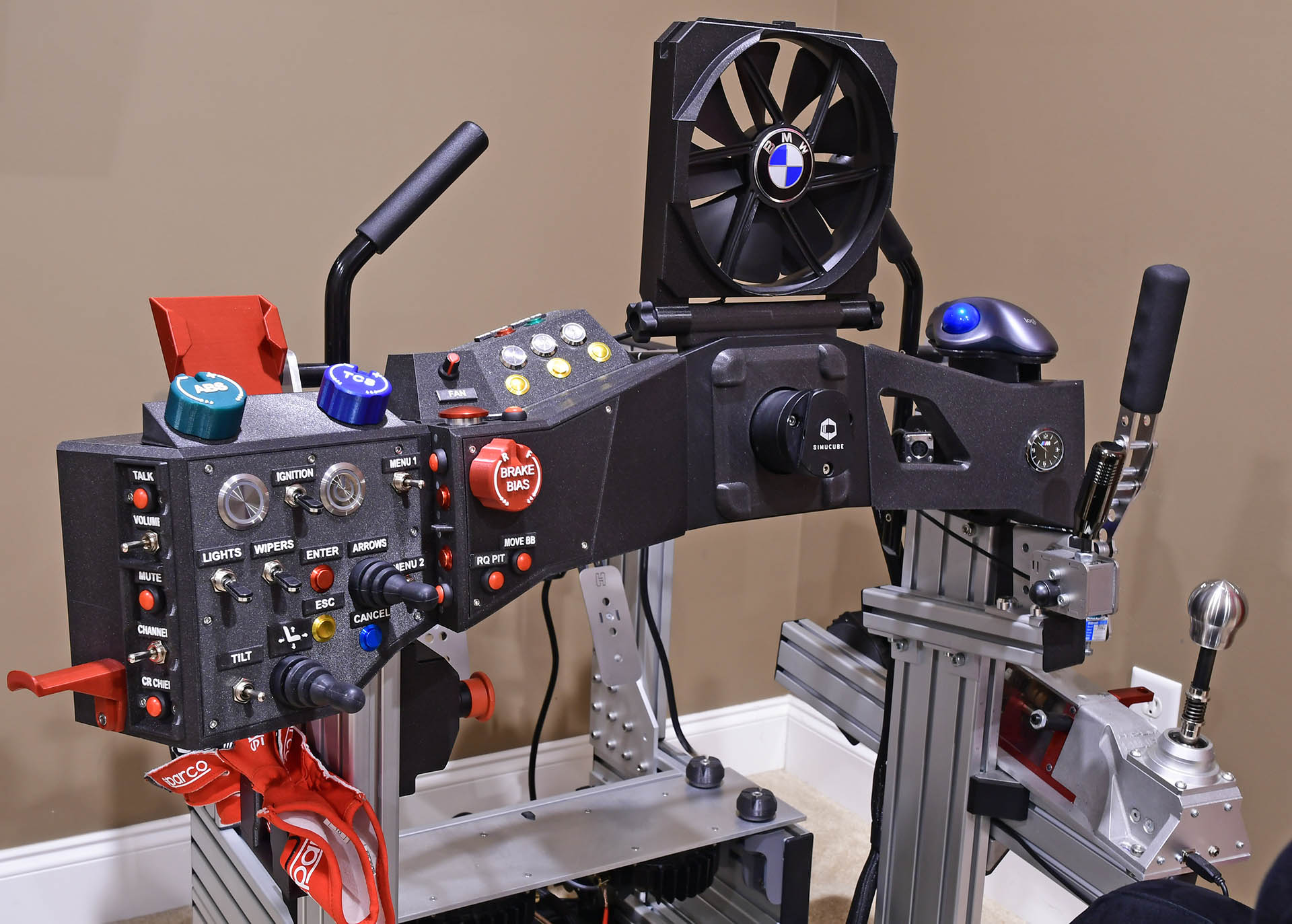 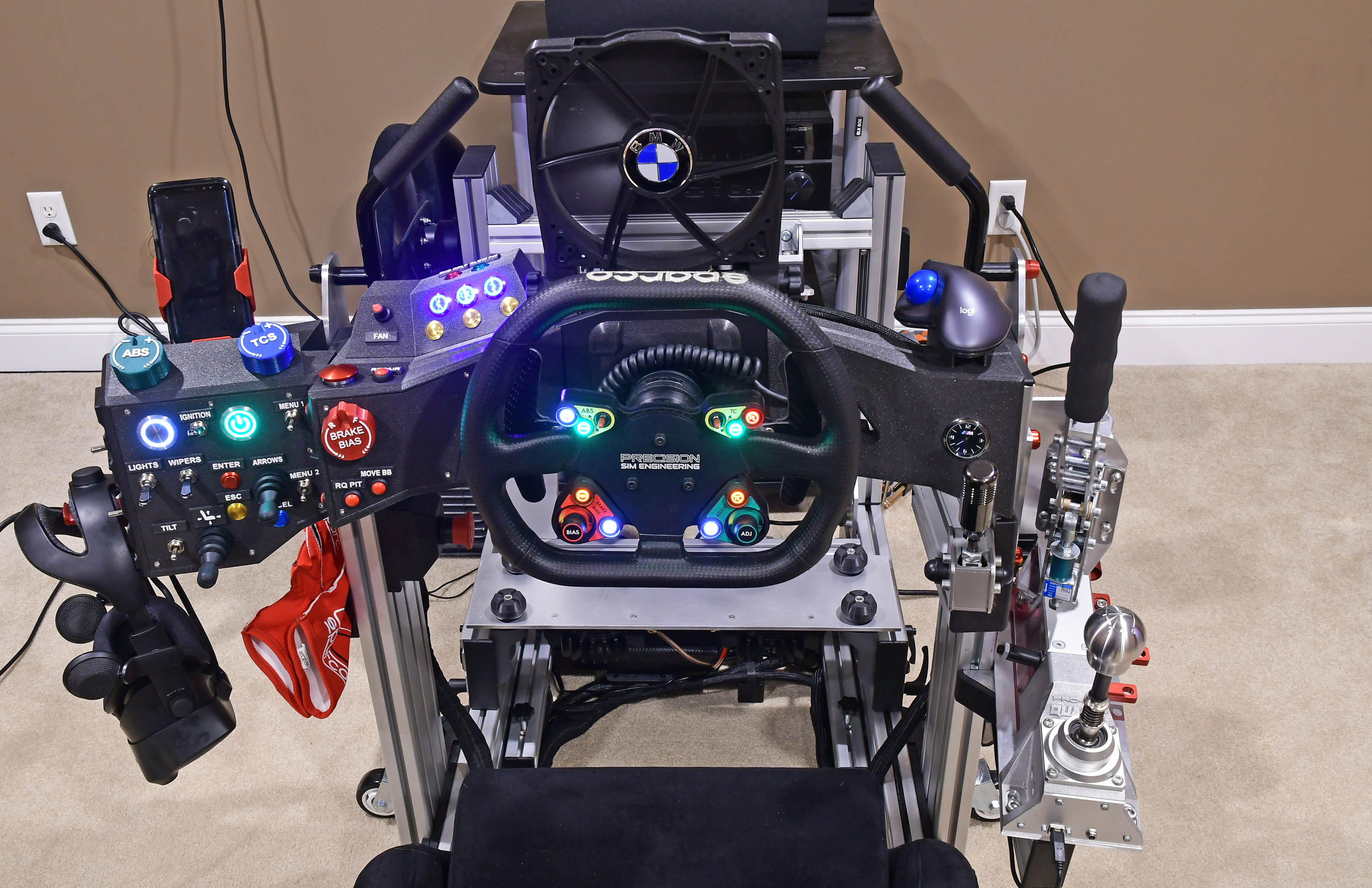 And if something like this looks interesting to you, all the Fusion 360 files are shared on Thingaverse so you could start with this design and take it in a direction you prefer. It's modular, so individual front panels can be modified to take different controls.

It utilizes a Bodnar 64 input USB board and all the 3D printed two color labels have 5x2mm neodymium magnets holding them in place, so you can remap the controls for different games and just keep a picture of each set of mappings and labels. 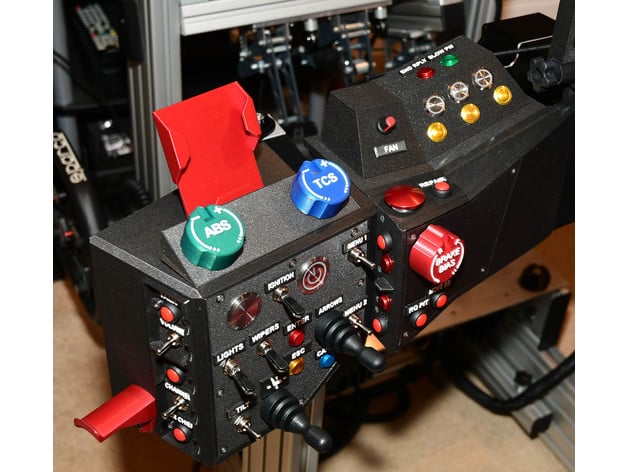 1/12/2021 Added a Replay Binnacle V4 that is 2mm taller to accommodate 2 additional buttons and added 5mm holes for magnets for them. Added Stop Replay and Slow Motion Labels in my button box label project. 1/12/2021 Updated the SideLeftButtonPanel to a V4 to keep the threaded insert hole from...

Similarly, doesn’t the Elgato Streamdeck just send key combinations when you hit a button? How is that going to help if you already have keyboard keys assigned? The Streamdeck’s buttons will quite likely be much easier to find and press than keys on a keyboard, but the Elgato’s buttons are not going to be additional independent controller inputs you can assign in a game, right?
Last edited: Thursday at 03:23

Similarly, doesn’t the Elgato Streamdeck just send key combinations when you hit a button? How is that going to help if you already have keyboard keys assigned? The Streamdeck’s buttons will quite likely be much easier to find and press than keys on a keyboard, but the Elgato’s buttons are not going to be additional independent controller inputs you can assign in a game, right?
Click to expand...

Yes, out of the box, the Stream Deck sends keyboard commands, however there are 3rd party "actions" that you can install that give much more functionality. There's one in particular that can control vJoy buttons (vJoy is a program that allows you to create virtual joysticks)...so you can indeed turn a StreamDeck into an actual button box with gamepad inputs recognizable by any game. 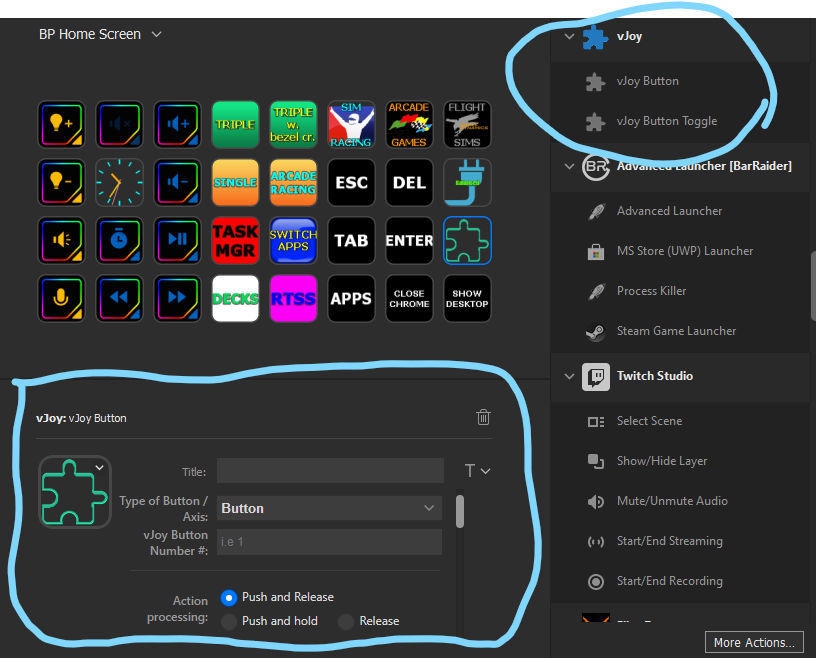 Here's a video I made giving a general overview of how I use my StreamDeck for not only sim racing (or gaming in general), but for also automating lots of PC functions. I didn't want to go too in depth (I plan to do future videos on how I setup everything) but it's really more than just a glorified keyboard/numpad IMO.

Personally I don't use one because all I need is Brake Bias and TC on my Wheel and I'm fine, but I would love to get a Button box in the future.
You must log in or register to reply here.

A
Do You Use A Button Box?

Front-mounted button box suggestions for WRC wheel to use in VR?