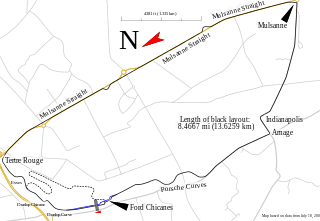 Basic info:
- This is an initial release that is (should be

) fully functional. There are some areas I'd like to re-do (trees, road surface texturing, gaps between guardrail sections), however those would have taken another few months to complete. Hence the version numbering of 0.90.
- Originally the track was started for rF1 by Sylvain Glapa, who has done an incredible job with most of which you still see today. The largest ones (in my opinion) would be the trees (look out for the distinct types in the right areas), the road surface modelling and the grandstands/pit buildings. The shaders and some textures have evolved but without his basis we would not have such a track today, let alone one this great.
- The shoulders down the Hunaudières straight are not for driving. We could not find any hard info but racing cars generally do not use it outside cases of emergency. We implemented this by making them uncomfortably bumpy.
- If you find something that should not be please leave a kind note. Few things are worse than you having a point that we don't read because it was presented in an unkind manner.

Performance guide:
- Use the Track Detail and Shadow Detail settings! Both are implemented intensively for you to fine-tune performance. Max/Full settings are beyond what my machine can easily manage. Don't be afraid to use High or even Medium settings, it will still look good.
- If you only have 1GB of Video RAM you might struggle due to the size of the track. Single Player should be fine even at high/full settings, but as soon as you load more than one or two AI cars you will probably see slow-downs. I'd suggest to go down to Track Detail: High and Shadow Detail: Medium as a first step and see if that frees up enough Video RAM for you. Track Detail: Medium and a lower Texture Detail setting would be the next steps.
- Reflections do not cost as much performance on this track as on others, as there are few reflective surfaces other than the cars. You might get away with turning it to Low or even High even if you can't do it on other, more reflective, tracks (like Fuji or Silverstone).

Known Issues:
- There is some flickering and clipping present due to the size of the track. We tried to minimize the flickering, especially with the spectators on the grandstands when looking straight at them from your garage, but could not completely eliminate it. This is more pronounced in some cars (depending on how far away the near clipping plane is as far as we can tell) rather than others.
- We had a single case of the pace car not deploying for a rolling start online but could not replicate it offline where it worked just as it should. If you encounter this please let us know.
- The 370z is prone to rolling over when cutting the second curb (the one on the right) of the Ford chicanes, presumably due to the underside hitting the edge at a bad angle or the suspension travel being too short. We, much like the FIA probably would, advise not to cut the curb.

If you notice this kind of behaviour with other cars as well, let us know.
Reactions: dark7samurai, Roderick Kennedy, Redglyph and 3 others