Union Island is one (of 32) island of St Vincent & the Grenadines. Located in the Caribbean sea, it has a population of around 3000 habitants. The summit reaches 999 ft (304m). It's a paradise for wind surfing. Driving? not so much...

I took a lot of liberties redoing the island. I made it to scale, but the roads in real life are limited and all made of concrete. The West only has forest path for example, whereas i made perfectly raceable roads all around.
Please note it is not a racetrack, and you should drive accordingly

Everything is made from scratch with my own two hands. As such, please respect my work and don't use it elsewhere without my permission.
It's also my very first track, so expect broken things. Feel free to : report stuff.
Also please do read the FAQ below among the rest


Nothing special here,
Extract the archive on your default track folder : C:\Program Files (x86)\Steam\steamapps\common\assettocorsa\content\tracks
You need 7z program : https://www.7-zip.org/
CSP not mandatory; version recommended : 0.1.76
Merci à :
Phoenix77 for the inspiration, tips, support and help
LilSki for his petrol station, and all his tutorials
AccAkut for his tips and bonus portable loo
Fat-Alfie for the inspiration + ads
JackCY and his bug hunt time + recording AI
Nico and his insights
LeBluem for his help with CSP
Mike08 (MJaY_8) for his help on csp grass & global ambient cohesion
GTAce for the work on the cameras
OrlandoEdits for Tony's restaurant (made in Puerto Rico!)
All the (un)fortunate beta testers
& Mario for his street art (not the ones signed Kobra !)
LAYOUTS :
- Freeroam : 30+ km, 45 pits, no AI line, no cameras, no race start, one time gate in Ashton if you want to create your own lap
NO AI line means NO cameras. You could always copy the ai + camera from another layout, but it will never cover all the roads
- Scenic : 17.5 km, 24 pits, AI line, Cameras, hotlap/race/weekend, physical bales
- West : 12.2 km, 24 pits, AI line, Cameras, hotlap/race/weekend, physical bales

CSP :
Recommended (Not mandatory) : 0.1.76
Night lights, rain, csp grass
tips : in ext_config.ini I turned off the lights_series (keyword : "heavy" ) that were causing heavy framerate drop. Feel free to turn them back to ACTIVE = 1 if you want the full night experience. Mostly the light being casted from the windows at night.
-Will there be Traffic for freeroam ?

Maybe, not sure what's possible given the roads. It's far on the to-do list though.​
-Cameras for Freeroam ?

Cameras need AI line. No ai line means no camera. Besides, even if, you couldn't cover every road, so would end up often with a wrong camera.​
For your own use, you can try copy the ai + camera from another layout​
-The road is very bumpy

i've tried and create a believable road surface, with its imperfections, as you'd find in real life. It is not a racetrack. Try and set softer suspension !​
​
-I have low framerate ?

V0.8 see great improvement in FPS, if you still have low framerate, maybe try renaming extension folder to remove all CSP features, see if that helps​
-My game crashes ?

The track works for many, make sure you test with a kunos car, and recommended CSP / sol version. Check with another track etc. You can also try to rename the extension folder, see if the track runs without any CSP features​
-My game looks dark/bright ?

Check other tracks to compare. Check my screenshots or videos people made on YT, if it doesn't look like that, try backup your settings and reset to detault. You may also reinstall a clean version of CSP / Sol.​
-CSP water for the ocean ?

Very much NO.​
CSP water presets are too limited. It looks silly, the sea isn't a mirror, check actual photos​
I've contacted ilja, the missing normal map for the current sea is coming in a future CSP fix​
-VAO patch ? 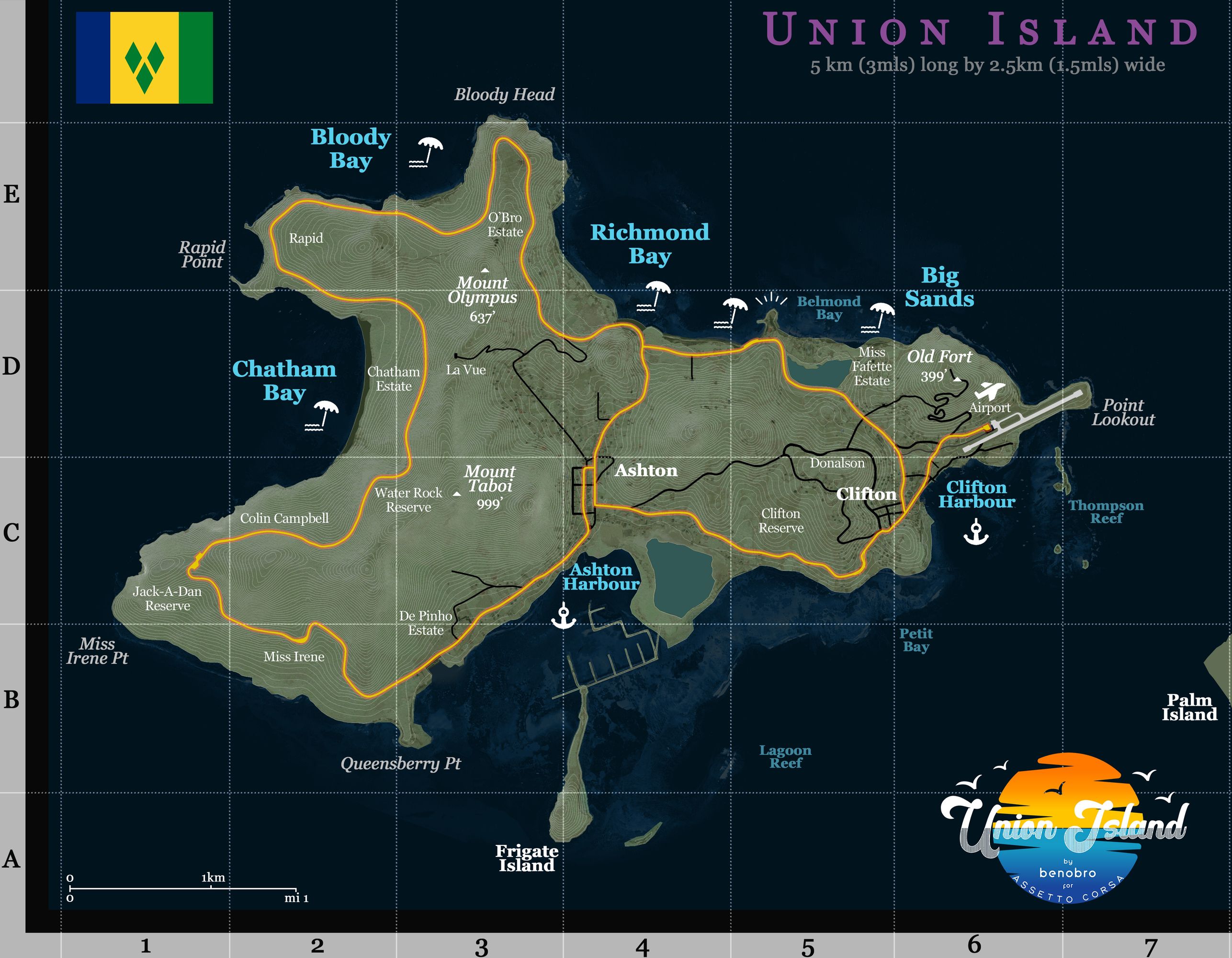 Once upon a time...
After helping Phoenix on LA Canyons, and PCH more recently, i always wanted to try and create my own roads. Being in control of the whole process of creating a track from scratch, and see how that exercice would work. It just needed said track. I lived 7 years on the island of Cyprus, and really wanted to recreate the feeling i had back there driving the Caterham. But not being there anymore would prove difficult to get the references etc. since Google map is limited to visit the island.

Time passed, and one day, out of the blue... as i was exploring the globe with Flight Simulator, i flew with a jet from Trinidad & Tobago all the way to Puerto Rico, no gps, just following the flow of islands. That's how i got the idea of making one for Assetto Corsa. And how fun it would be to have a "complete" map surrounded by water, something that's never been done (to my knowledge). First i thought of Canouan island, which is 30km away from Union Island. The shape looks cool, although a bit narrow. Then flying around a bit more, i passed Union Island and thought that was it.

screenshot from MSFS the 9th of november 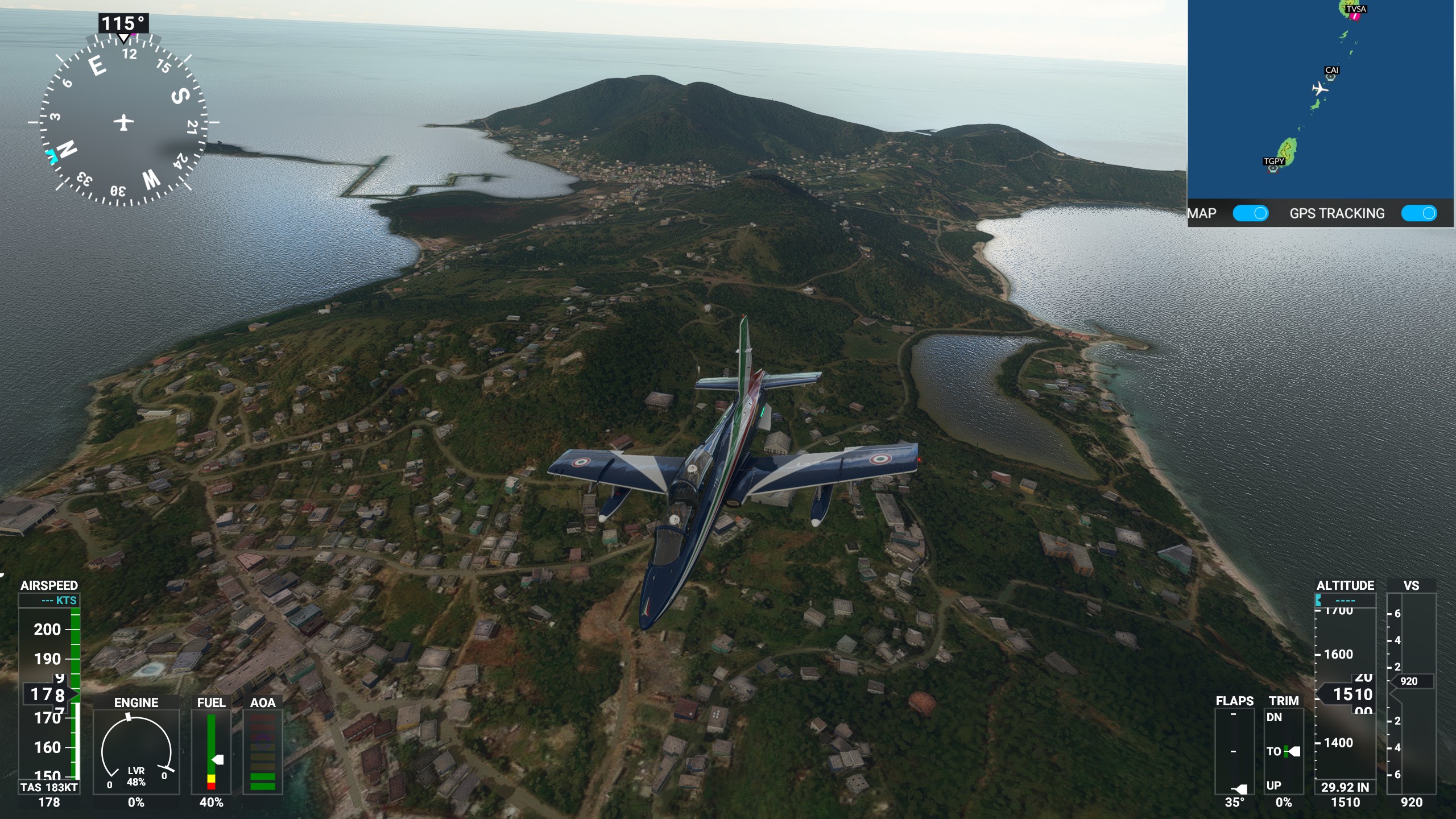 Next thing you know i gathered all the nasa imagery i could find, and elevation data and jumped in 3dsmax. As soon as i got a free weekend i started working on it 3 days in a row like an impatient kid. After which i had an early version, naked terrain, basic barrier not to fall at every corner, and very early version of driveable roads 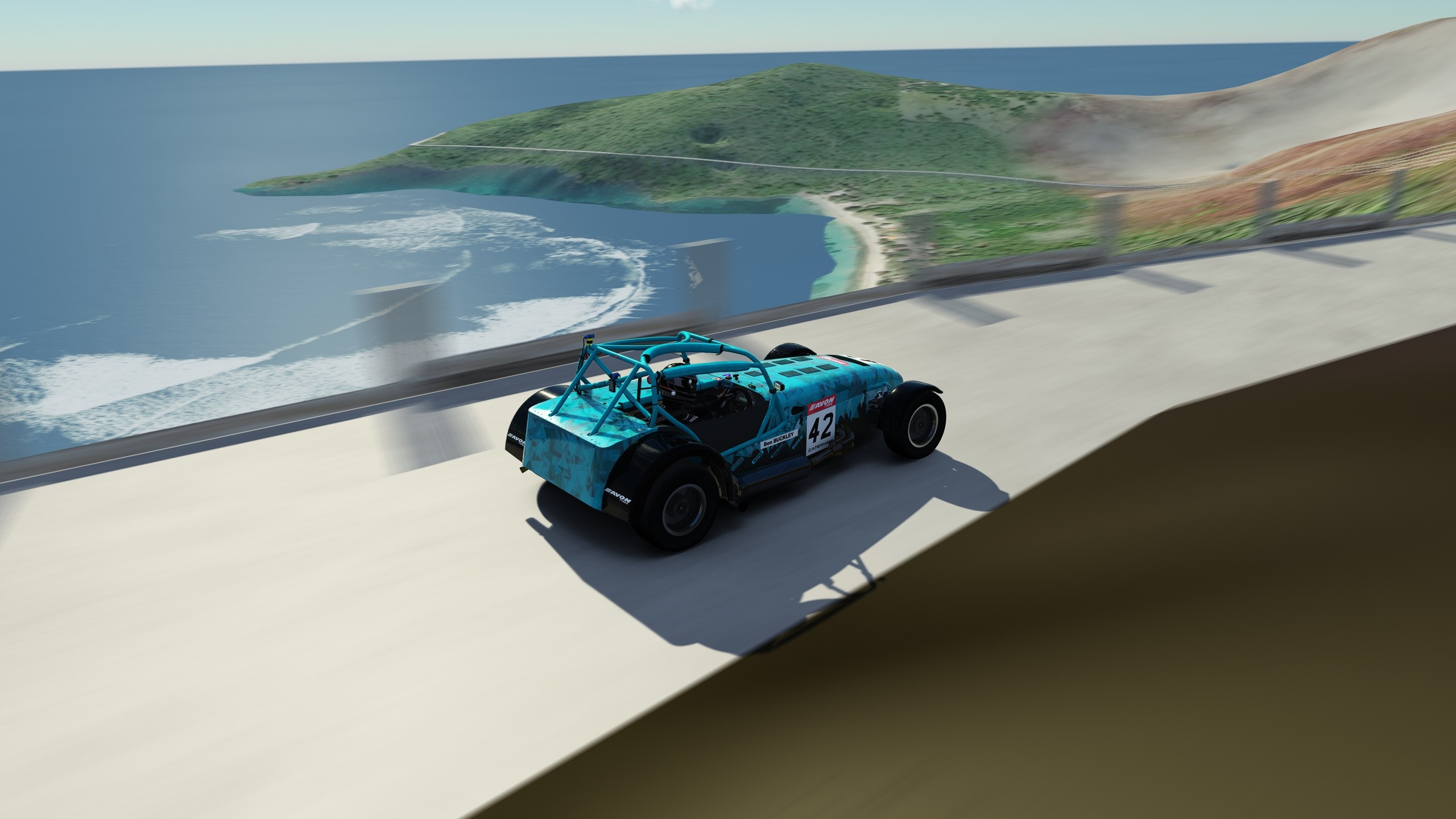 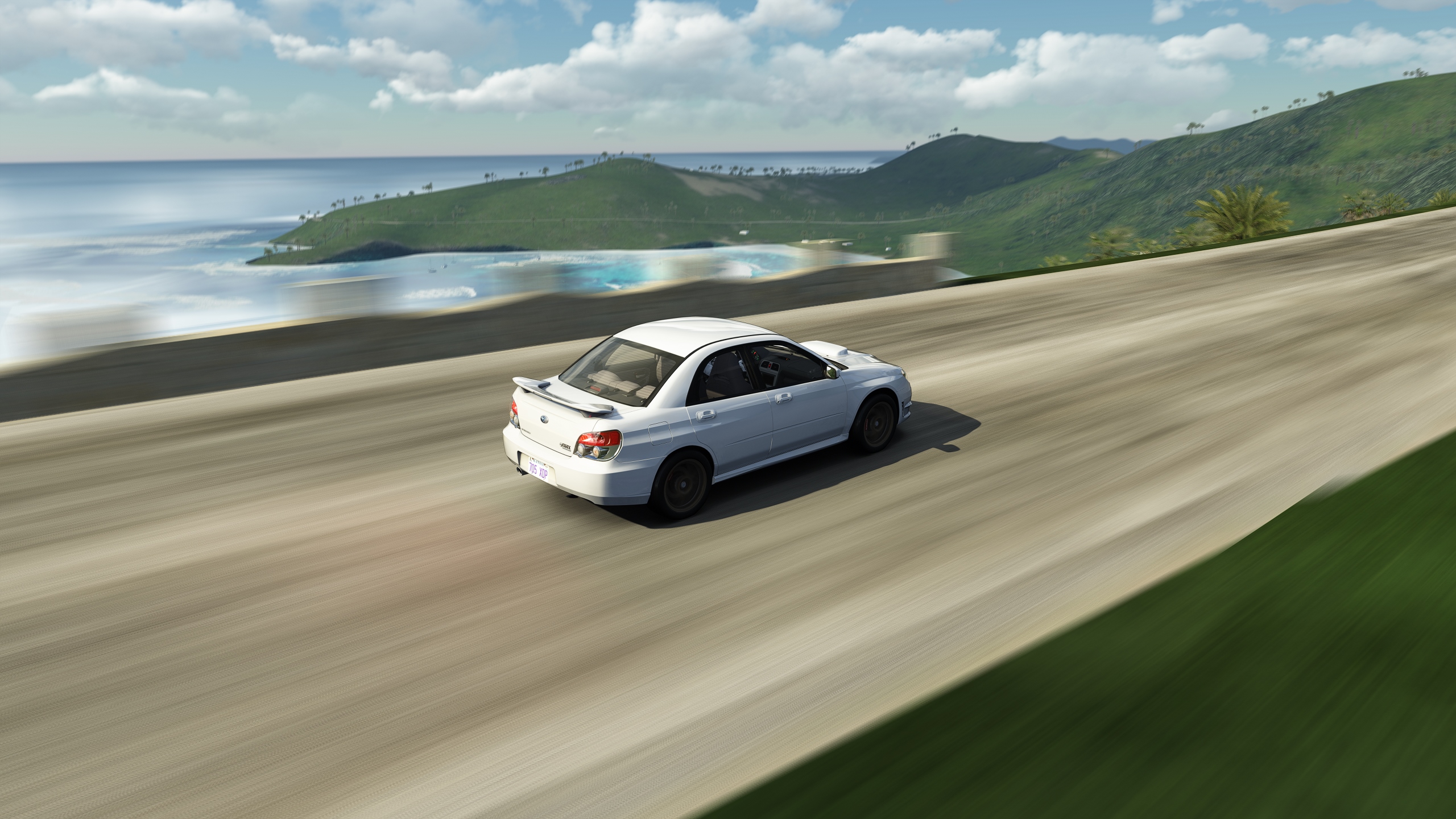 and so on... i wish i was more organized and did a proper timelapse progress !
But i remember the first drive was phenomenal. The feeling of driving on a track of my own creation, built from an empty scene felt surreal.
Quickly i really wanted a Test Drive Unlimited feel with a full "around the island", and this is what became the Scenic layout. It is not half an hour drive like the original, but with 17km and not all perfect asphalt, it certainly is challenging to master !

There's been a lot of experimenting, reading tutorials, and more experimenting. But almost 400 hours later (see details here), it starts to feel a bit more vibrant and alive than the screenshots above
And now, even though it's not finished and perfect as i'd like it to be, my wrist is calling a stop as i've spent more than 70 hours last month alone, on top of my actual job... Decided it was time to share it and take some well deserved time away from the computer !
There's still lot of things i want to add and polish, so stay tuned for later updates...
- add details in towns (ground floor shops, markets etc.)
- add few more roads following existing ones
- improve side road transition (!)
- merge any soil texture with terrain mask
- add "race" detail for timed layouts
- add easter eggs (most important part)
- redo a FFB mesh using the visible types of tarmac
- improve performance (reduce 99% cpu when lot of AI !)
- improve AI line. They do crash a lot at the first corner on West layout ... and in the harbor on Scenic
- any bug or issue, please check with a default kunos car, with/without Shader patch, and then report it on the discussion thread
- please note; modders aren't responsible for CSP breaking stuff every now and then
@mikey79 awesome work : 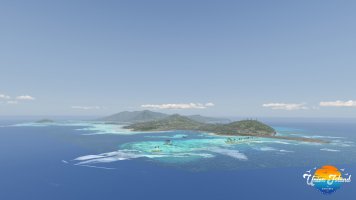 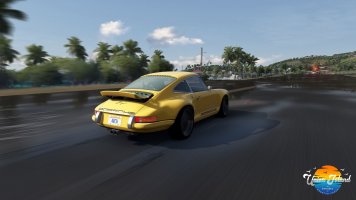 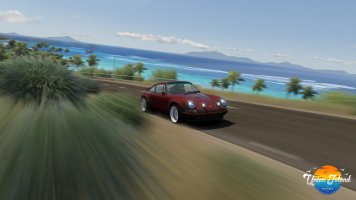 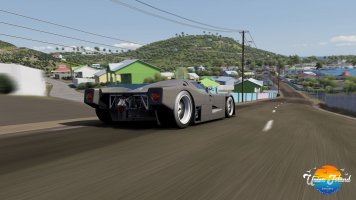 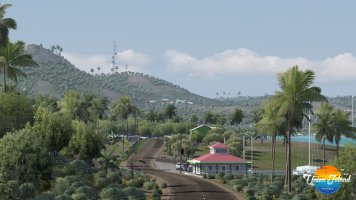 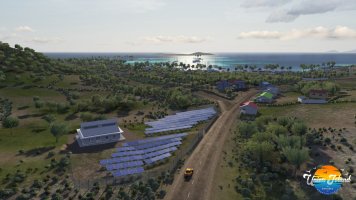 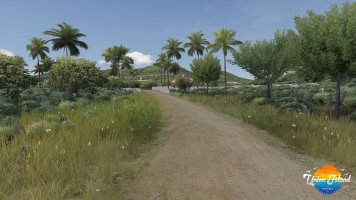 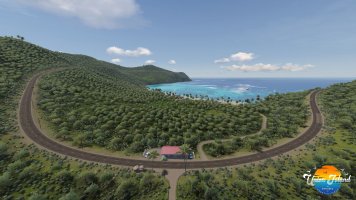