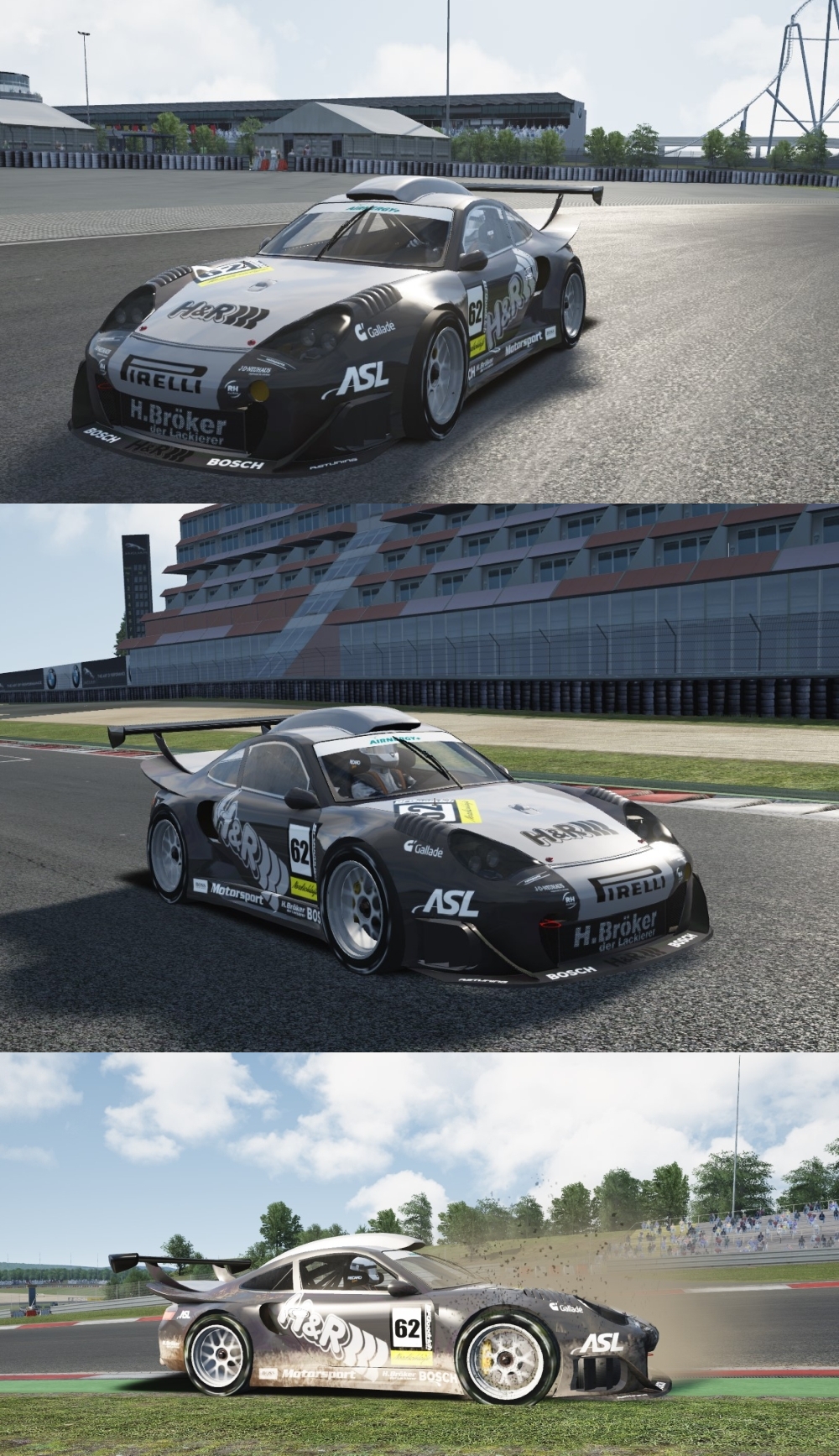 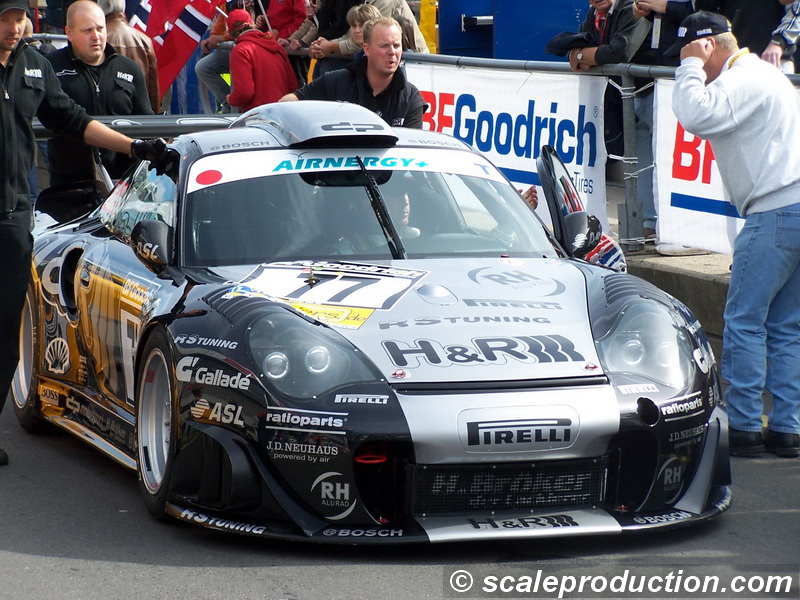 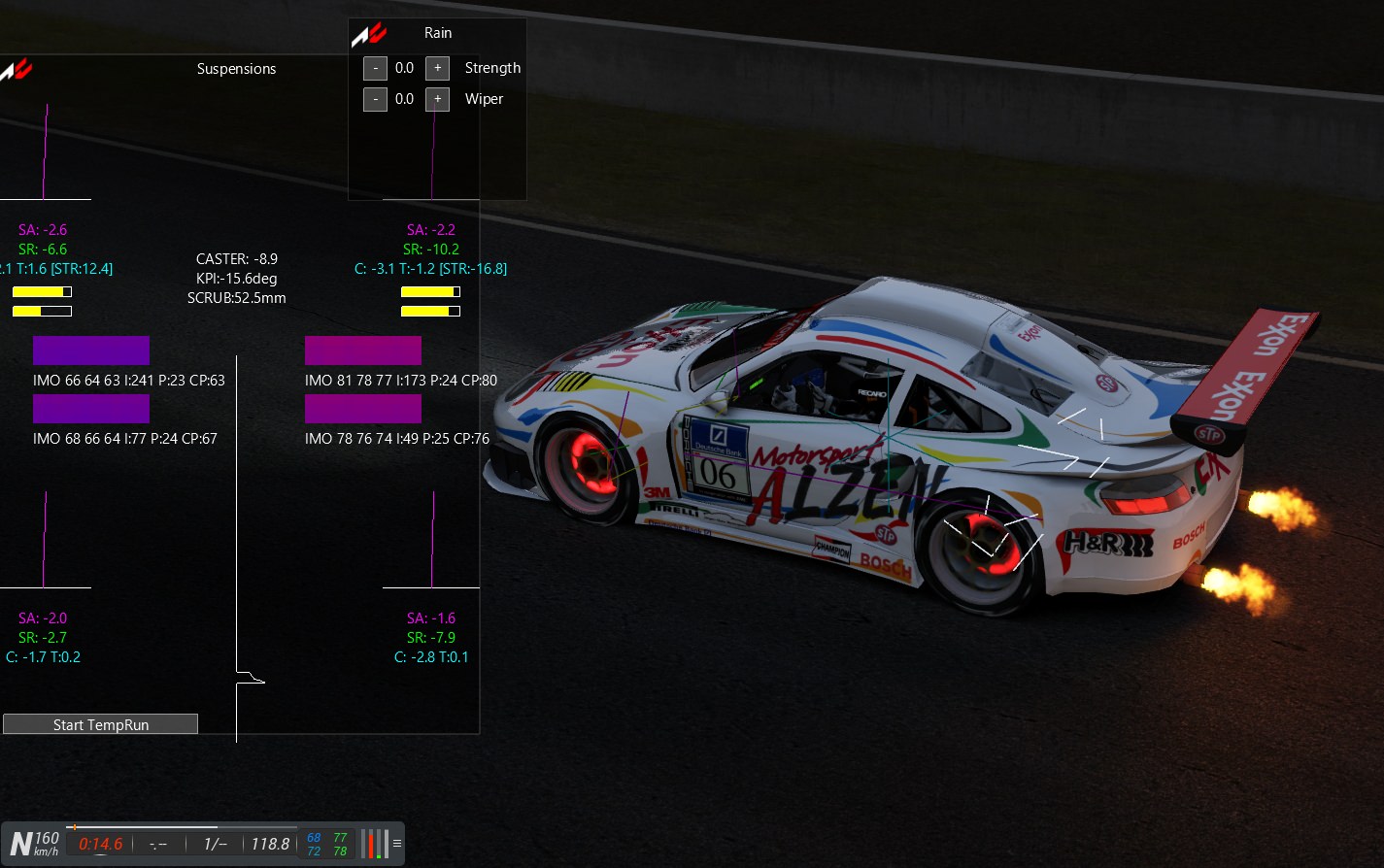 old build thread on the official forum (CLICK)
This is a one-off car build by Jürgen Alzen Motorsport for the VLN championship on the Nürburgring Nordschleife. It ran during glorious times full of custom build cars, alongside old DTM and spec-series machinery, before showroom GT3 class cars took over. Speedwise this car is very ...different. Be prepared for more power, more weight, less aero, less electronics, not even a sequential gearbox. Enjoy GT3 speed with a manual shifter.

The mod includes two versions of the car, a ~740 PS, RWD only version designed after the first iterations of the car running in 2003, and the ~600 PS AWD version that ran in 2005, the car's final year.

Physics of the cars were created with the official team's permission and (a little bit of) their data, and optimised based on its real life lap times around the 'Ring.

Both versions of the car include a number of skins each, some inspired by real race cars, some totally fictional, plus templates are included. Sound is custom.

This mod is not related to that old VLN 2005 mod for RFactor. Model, physics and sound are made from scratch.

Jürgen Alzen and his team for real data and permission

Physics: myself & numerous clever folks you find on Discord, some of Dauntless' work is also left in it

Soundbank development: users Fonsecker, yepp (and his flute), aphigod (forgot for what ), PheNom107th (Fmod effects), NeverKrash (turbo sounds) and whoever did the sounds for the MS Flightsim 98

Great car and great review on Tiiips!
https://www.tiiips.com/m/tiiips/home?action=viewObject&oID=25605
Upvote 0
This is frigging awesome. The RWD is a real best, scary to drive but man it's great when you manage to tame it. AWD is more user-friendly but still plenty of character. And the turbo sounds are fantastic.

Interesting note: 2 years ago I posted in the support thread about the bad visual effect where road surface is reflected in winshield banner. That doesn't happen anymore, although the car hasn't been updated since then. So apparently some CSP feature fixed it. Works for me
Upvote 0
Awesomeness. What a challenge the RWD is! And the sound! Fantastic work. Thank you very much.
Upvote 0
This car is a beast! I've only spent a few minutes with it last night doing burn outs and trying a few corners. Does it have TC? I didn't have time to check.

This requires a feather like touch on the accelorator I guess.

Great fun. Must try on a proper race with all the grid made up of this car.

AccAkut
The 2005 AWD variant got TC, as the real car had it in that year. The RWD 2003 version did not
Upvote 1
Bloody Awesome!!!
Upvote 0
Wahouu
Upvote 0
Wow man this is a fantastic build.
Upvote 0
top stuff, this car is madness you have to use your brain when driving especially around longford top speed of 309km.
Upvote 0
https://sportscar-info.de/2018/04/02/uwe-alzen-fahren-im-simulator-hat-wenig-mit-realem-rennsport-zu-tun/
.... :/

AccAkut
Glaube sein Bruder Jürgen ist da leicht anderer Meinung :D
Upvote 0
Wonderfull work! Thanks
Upvote 0
Awesome. I didn't like the early versions at all. Great to see so much improvment. The sounds and the Physics are amazing. Only thing i got a little problem with is the FFB. It starts to clip at some point. The strenght is good in most situations. Only driven the RWD version yet.
Upvote 0
Only have played with the RWD : what a beast !
Suprisingly this is the only car I can drive without crashing ... The FFB is so close to what I can feel in a real car, wish the other cars in AC was that good to communicate thru the steering wheel.

AccAkut
Maybe this is the result of the new Multilink rear suspension... I think so far this is the first and only mod using this suspension type.
Upvote 0
Great work, got better and better with every update. All your other cars also made a massive improvement. You get better and better, be proud of your work, its damn good.
Upvote 0
What a great update to an already great car! It is perfect for those sessions when you just want to scare yourself :D It is pure joy to drive this with no TC, no ABS and a manual box. Superb physics and a wonderful set of sounds (especially the transmission whine!). Excellent car, and thanks for all your hard work :)
Upvote 0
Great update for a fun and unique car.
Upvote 0
Thank you!
Upvote 0
Let's try it out! Thanks!
Upvote 0
Wow!!! Caught up with this mod, watching RaceDepartment YouTube. It really is special. Love the SXF. Thank you for sharing.
Upvote 0
Damn this is a beast! Hard as heck to drive but loads of fun! Thank you :) - https://youtu.be/cYk-MNVOGJM
Upvote 0
Very nice update, thank you, like fine wine this great addition to AC is aging well and gets better. A beast to drive.
Upvote 0
Read more…