Marcel Offermans said:
I should finish that soon, last week I was ill for a few days, which delayed my answers and quite frankly this week with the sale and release of the cars, it took the back burner just a bit. But I'm answering questions... Hope to be done in a day or two.
Click to expand...

What? Free time? What are you a unionist?

Looking forward for the interview and fabulous cars btw!

MSV F3-016 LCD display in the centre of the steering wheel blinks on and off (mostly off) at Ibarra. I only tested two tracks (the other was official Portugal where this issue did not occur). It's like a simulation of an electrical gremlin--completely random from what I could determine! No idea if it's the car or the track causing the issue, but if someone else could test it at Ibarra (from Reiza pack), that would be a good first step. 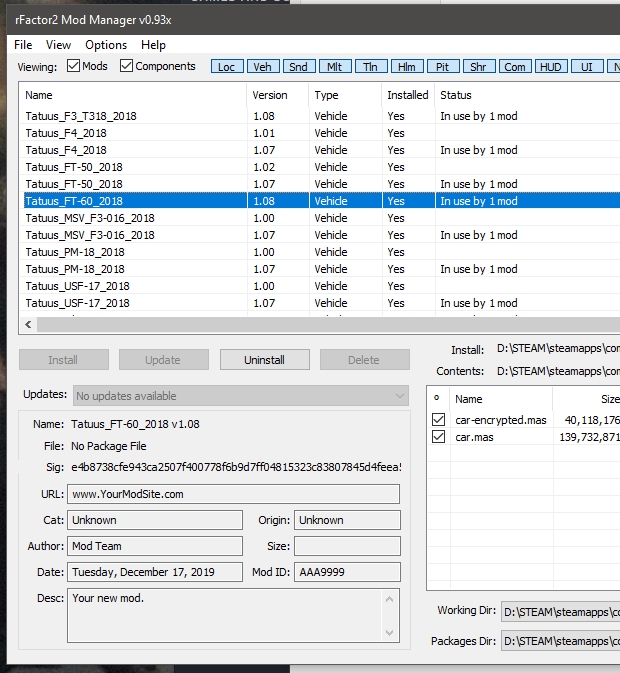 Durge Driven said:
Anyone know why FT-60 has only 1 version and the rest 2
I wish they could hide the others

I'm no expert and I learned all I know from @Daiman Patel , but as I understand it, the models with 2 versions have been updated. The reason they show 2 versions is that the earlier version contains encrypted data and the later version doesn't. Don't remember why right now but maybe stuff like skin templates and stuff that modders would need access to. So if a model has only one version, I'm guessing that it has not been updated. Was the FT-60 a later addition to the Tatuus clan?

For instance the GT3 packs all had doubles showing in Mod Manager, now they don't

Premium
Yes some is baffling

Like the Info Box in Mod Manager that has No Info 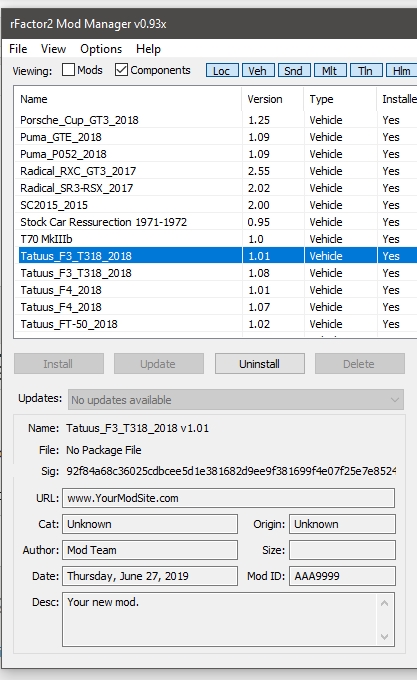 Like the Info Box in Mod Manager that has No Info

Like the details I enter when joining a free wifi network.

For instance the GT3 packs all had doubles showing in Mod Manager, now they don't
Click to expand...

Theres not two models. There are two rfcmp installs. 1. The model gmt, textures and all the physics files. 2. is the Teams folder we used to call it, now called car-upgrade for what ether reason.

The reason the Tatuus cars have only 1 rfcmp in ModManager is both Mas (car-upgrade & Car) are install via the same rfcmp instead off the 2.

Saying it's baffling is a under statement. There's a lot off things S397 do that makes not sense. It seem if it's not simple and straight forward it can't be right! Let's make it as confusing and hard to work with as possible seems to be the S397 consensus.

Premium
Sorry, yes I meant 2 versions of course
I thought multi versions are for DLC security ?

One version is the encrypted stuff and the second version has the bits we're allowed to tinker with. If you've knocked the official GT3 cars down to a single version, then they're goobered.

Emery said:
One version is the encrypted stuff and the second version has the bits we're allowed to tinker with. If you've knocked the official GT3 cars down to a single version, then they're goobered.
Click to expand...

I have 2 versions of all DLC in MAS2, when I make mod you must pick highest version of all DLC 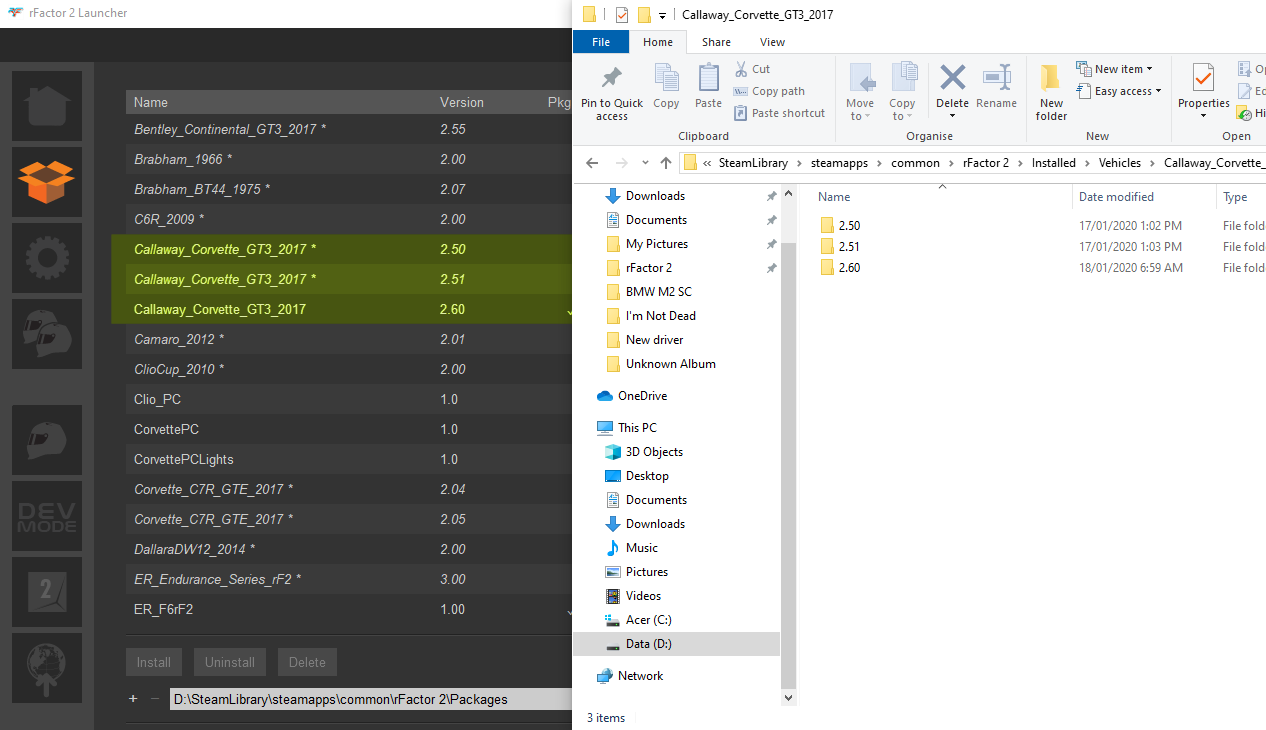 The Tatuus cars have 1 line each the the Modmanager list.
Apart from the Tatuus_F3_T318_2018 (high lighted) has a skins pack for the Formula 3 mod.

Any additional listings are either;
1 You've moved the Package folder, set a new path in addition to the one standard in rF2 (=2 Package folders)

2 You have skins packs in the package folder that have not been updated you need to delete. To find the version numbers would be the ones not shown in your Install folder.

Durge Driven said:
Anyone know why FT-60 has only 1 version and the rest 2
I wish they could hide the others

What you see here are separate versions of component files for each of the cars (excluding, of course, the Tatuus FT-60 - there is only one version of this component in the packages directory to which the 'ModMgr' tool is pointing). They are not, as some have suggested, component "updates" in the rFactor 2 sense of the word.

An "update" does not appear this way in the 'ModMgr' tool - it requires the base component to be installed before the update itself is visible (and the item will also be highlighted in bold to indicate that an update is available to be installed).* In addition, the Tatuus cars have not been packaged in this way, i.e. as components with separate base and update files; this is something that Studio 397 typically do only with their paid content, and you seldom see it done with any 3rd party content. New versions of components, however, do appear as separate items (with the same name, but a different version number) as you see in your list.

Out of curiosity, how did you acquire the content? Did you subscribe to the cars via the Steam Workshop, or did you download them manually via SteamCMD? If you subscribed to them then any old versions should be automatically deleted whenever new versions are released and downloaded, as long as the files have not been moved. And if they are not being referenced by any server packages / mods then the old versions of the components will also be uninstalled. Meanwhile, files that have been downloaded manually (or moved from the folder to which subscribed content is downloaded) will need to be deleted manually.

If you would like to keep older versions of component files, for whatever reason, but do not want the items appearing in the content list then you should move them to a separate folder. At the moment there is no facility to hide old versions of components in the 'ModMgr' tool or 'Content Manager'.

I hope this helps to clear up any confusion, and answer your question.


*Just a note, this is not the case when using the 'Content Manager' via the rFactor 2 launcher - its behaviour is different to that of the 'ModMgr' tool; even "updates" are displayed as separate items in this list.

Staff
Premium
Pffff, you see?
I told you I'm not an expert.

Denis Betty said:
Pffff, you see?
I told you I'm not an expert.
Click to expand...

I'm no "expert" either... I've just been doing this for quite a long time!
You must log in or register to reply here.