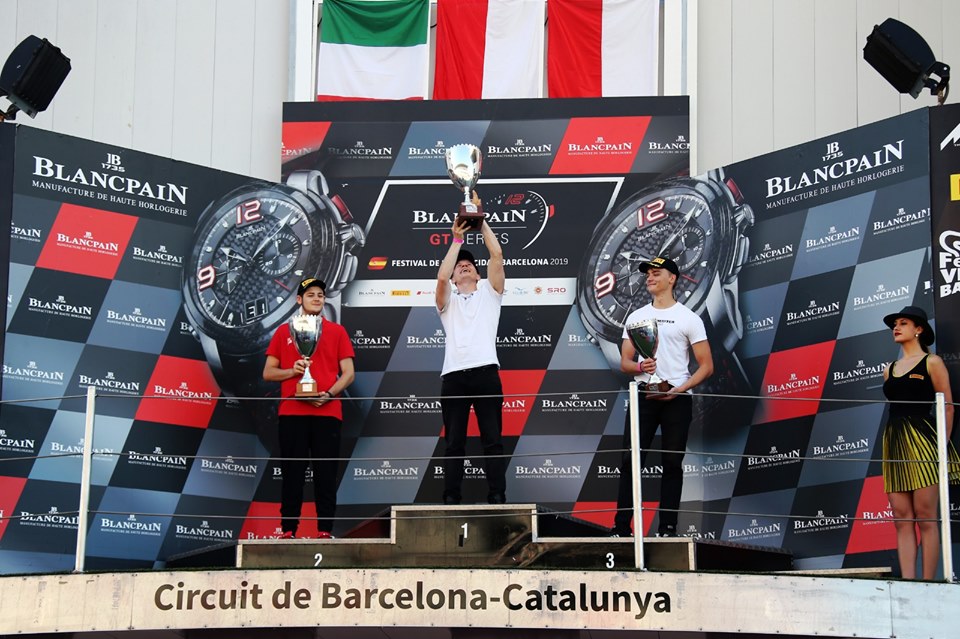 Kamil Franczak dominates the final round of the SRO E-Sport GT Series in Barcelona this weekend, taking the honours for himself and team Thrustmaster Racing.

April 2019 at Monza would see the very first round of the SRO E-Sport GT Series - a brand new E-Sport championship using the official simulation of the Blancpain GT Series - Assetto Corsa Competizione.

Scheduled to run alongside the Blancpain GT Series at five of the finest racing venues anywhere in the world, professional and amateur E-Sport drivers would be destined to come together and race in the pressure cooker of the SRO E-Sport GT Series gaming park right inside the heart of the Blancpain GT Series paddock - pushing themselves, and their nerves, under pressure and to the very outer limit of their capabilities.

Starting off with a bang at the legendary Monza circuit over the weekend of April 13-14th, the new series followed the 2019 Blancpain GT championship to Circuit Paul Ricard at the end of May, basking in glorious sunshine for the second ever semi-final event for our E-Sport drivers. With Paul Ricard complete, the series would then move on to the biggest race in GT3 endurance racing - the iconic Total 24 Hours of Spa at the world famous Spa-Francorchamps circuit in Belgium. Rain and shine on both the real and virtual racetrack would be the order of the day, before moving off to our final qualification round at the equally iconic Nurburgring in Germany. Running alongside the Sim Racing Expo, Nurburgring would be the final chance for our PRO, SILVER and AM drivers to take a place in the big one... the Grand Finale at the Circuit de Barcelona-Catalunya in Spain.

Switching things up for not one, but two 60 minute races for our E-Sport finalists, Barcelona served up what was arguably two of the finest showcases of high level competitive E-Sport action in virtual motorsport today.

Using the cars of the 2018 Blancpain GT Series in Assetto Corsa Competizione, ten E-Sport stars and two real world Blancpain GT Series champions showed the world what it means to be a competitive virtual racer - but one man proved himself to be a class above all others this weekend - Thrustmaster Racing driver Kamil Franczak.

Taking Pole Position for the opening 60 minute event of the weekend on Saturday afternoon, Franczak would do well to avoid the close attentions of Thrustmaster team mate Kamil Pawlowski into a fraught turn one, the two AMG Mercedes drivers trading paint in a fierce fight to head the field into the opening moments of the race.

Fortunately for Franczak, the opening corners would be as close as the field was likely to get all race long, with the Polish star emerging unscratched and able to execute his race plan with near robotic efficiency. Turning lap after lap within fractions of a second of his ultimate lap pace, Franczak would continue to eke out an ever increasing gap to the chasing field, headed by Thurstmaster team mate Pawlowski, and Williams E-Sport star Kuba Brzezinski.

With the two Kamil's showing the world how it's done up front, much of the action would be centred around Brzezinski and his heroic efforts to keep the field behind him for pretty much the entirety of the 60 minute race.

Having chosen a Bentley Continental GT3 that on the day wasn't quite a match of his opponents, Brzezinski produced a masterclass of defensive driving to retain his hard won third place through to the end of the on track action, ducking and weaving in fine style as the Williams driver maintained his composure and secured a much needed haul of points heading into the final race later that afternoon. 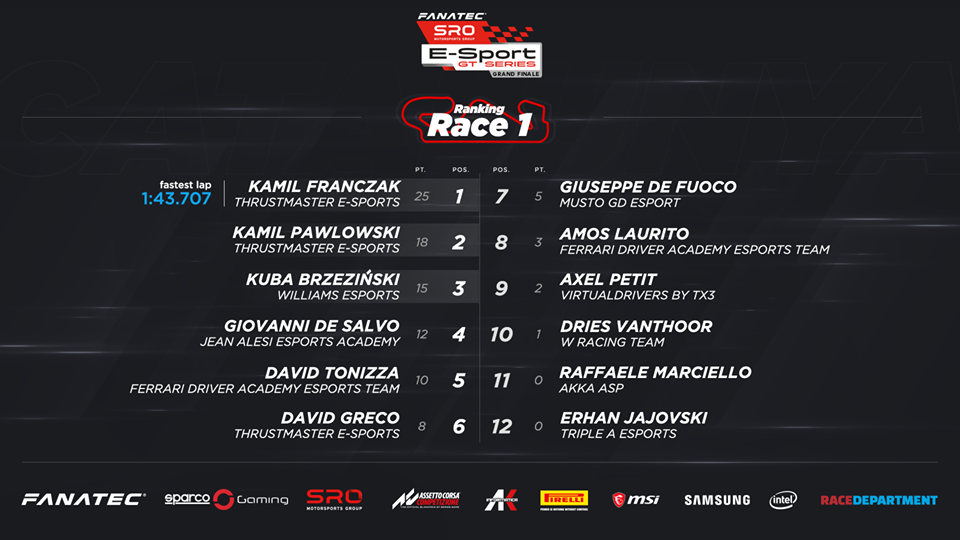 With the SRO E-Sport GT Series using a new format for this final round event, namely extending the race length to two 60 minute points scoring events, the need to score strongly in both races would prove to be key for the drivers as they bid to secure a top three overall finish, and qualification for the grand final prize of a Lamborghini Squadra Corse racing experience.

Opening race completed, and a first tick in the box for Franczak with a lights to flag victory at the laserscanned Circuit de Barcelona-Catalunya.

Following much back slapping amongst the drivers and a short period of rest and relaxation completed, race two on Saturday evening would see the stars of the SRO E-Sport GT Series have to go through it all again out on circuit, beginning with another pressure filled 20 minute qualifying session to set the starting grid for the final round of this exciting new series.

Having proven that passing is possible, but certainly very difficult around the Spanish circuit, Franczak, Pawlowski and Brzezinski joined their rivals on track with a keen determination to put the cars at or near the front of the field by the time the chequed flag fell on qualification... a feat achieved once again by the man of the moment Kamil Franczak - the current series points leader managing an impressive Pole Position, taking the top spot by just over 2 tenths of a second from his Williams eSport driver Brzezinski. Of major note from the final qualifying of the season would be Kamil Pawlowski, the race one runner up having a difficult session in the second AMG Mercedes, finding himself a full half second away from his team mate and down in sixth position for the start of the final race.

Come the green flag it would again be Franczak out front for the duration of the proceedings, the task being made all the more straightforward thanks to an enthusiastic but ultimately unsuccessful attack from Brzezinski around the outside of T1, a move that would cost the Bentley driver both time and track position, leaving Franczak clear to pull away from a chasing field now headed by Ferrari eSport Academy driver David Tonizza, predictably taking part in the Ferrari 488 GT3.

Tonizza wouldn't have an answer for the pace of Franczak despite keeping the AMG Mercedes man on his toes throughout the race, eventually converting his strong start into an impressive podium position. Coupled with his fifth from race one, Tonizza would ultimately score enough points to be classified second overall, a fantastic achievement from one of the (e) sports young up and coming drivers.

But what of Pawlowski? Having started from sixth on the grid and knowing full well that everything depends on securing a solid finish to race two, the young star had an eventful race throughout the sixty minutes of action, with the provisional overall scores often swinging for and against the favour of the driver.

Keeping his nose clean and benefiting from some shrewd racecraft, Pawlowski would eventually do just enough to bring the car home in a fifth place, and with it securing that important top three overall result, earning the Thrustmaster Racing team a one - three in the overall drivers standings, with Ferrari star Tonizza classified in second position. 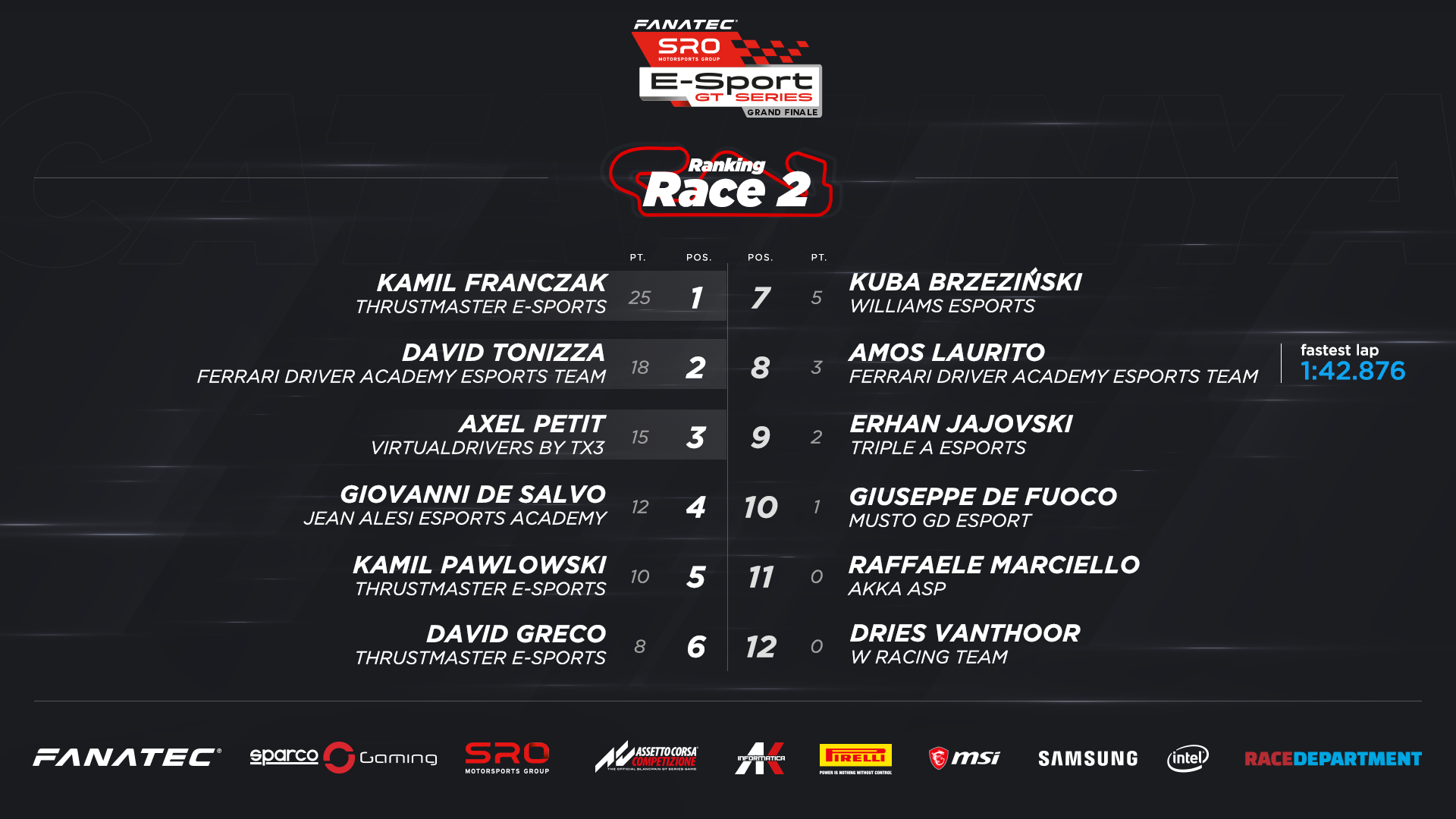 Regardless of the final results, each and every driver from the series can count themselves as victors this weekend. Barcelona was very much a showcase of how E-Sports can produce a scintillating racing experience for both the drivers, and those watching the action unfold on their TV screens.

We've seen hard and close racing all year, with some fantastic performances by a number of drivers throughout the course of the season. However, we can only crown one winner, and I'm sure you will join me in congratulating Kamil Franczak, who, when it really mattered, never looked like being bettered on the day. 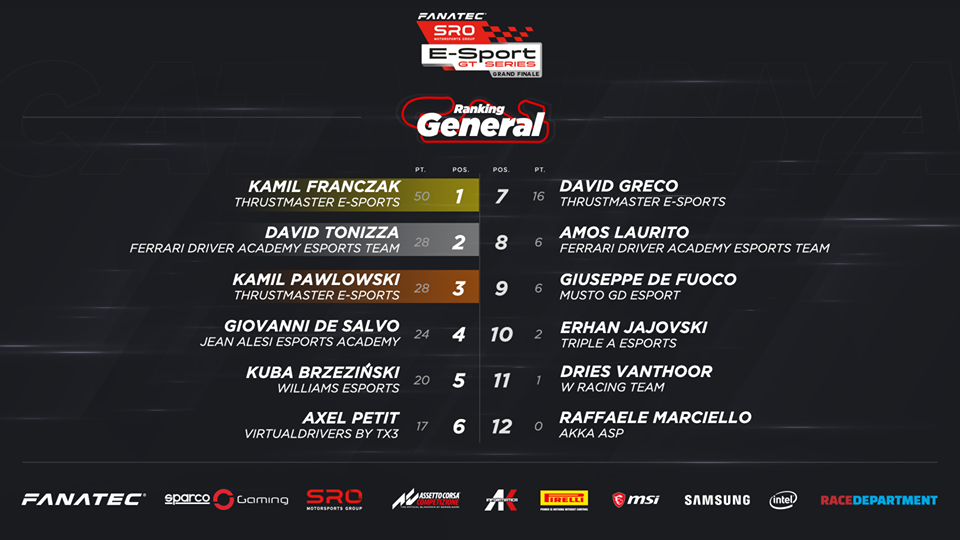 Paul Jeffrey
RaceDepartment Editor-in-Chief, occasional YouTuber, commentator and broadcaster, with a passion for motorsport on both the real and virtual racetrack.
Reactions: Raffi_M, antonn, Jopamir and 3 others

Premium
Are these races also uploaded to normal video platforms like youtube or vimeo? I don't do twitch it just doesn't work here :-(

They will be uploaded to our YouTube channel soon.

Glad to see my countrymen almost dominated the Final.

It makes think about unpacking my sim rig and doing some simracing again, instead of just watching others doing it ;-)

Premium
Kamil is very much the real deal. He's been really on it all year, and to top it off, he won the Fanatec Podium Challenge race on Sunday, despite having a problem with his rig for most of the race. Impressive stuff!

Chris Haye said:
despite having a problem with his rig for most of the race.!
Click to expand...