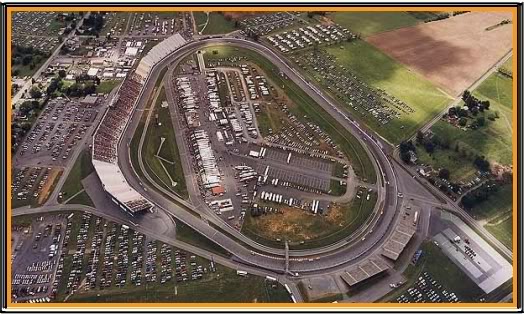 Nazareth Speedway was an auto racing track in Lehigh Valley, Pennsylvania which operated from 1910 to 2004. The track is often associated with local drivers Mario and Michael Andretti. It was associated with Frankie Schneider in its earlier dirt track history.

Track history
The site began hosting motor racing events in the 1910s. There were two separate racetracks that existed and operated on the site, an original 1/2 mile dirt track and later a 1 1/8th mile dirt track was added. The Penske owned paved speedway replaced the big track and the small speedway was replaced by the expanding of the grocery store in 1988.

Dirt track (large)
The big track was opened in April 1966, as a five-turn 1.125-mile (1.811 km) dirt track named Nazareth National Speedway. The track featuredmodified races. Frankie Schneider had a clean sweeps at the event - he had the fastest qualifying time, won his heat race, and won the feature event. That turned out to be the only event at the track in the season.
The track held nine events in 1967, which turned out to be the most the track hosted. Schneider won five of the events.
The track hosted five modified events in 1968, and Schneider won three of them. Al Tasnady started near last in the August 24, 1968 modified event, and won the race by lapping all drivers except Schneider. The USAC Dirt Champ cars raced at the track on July 13, 1968. The race was won by Al Unser, who beat local driver Mario Andretti.
Andretti won the USAC dirt champ car race in 1969, and Rags Carter won four consecutive races.
Nazareth National Speedway held 52 races on the mile and one eighth track between October 15, 1966 until it was closed on November 7, 1971. Frankie Schneider won eleven races, which was by far the most.

Paved track
After closing in 1984, the track was purchased and paved by Roger Penske in 1986.The track was taken over by Lindy Vicari in 1982. Vicari knocked down eleven years of growth, and shortened the track to a one mile (1.6 km) oval (still dirt).
Penske's new track opened as Pennsylvania International Raceway in 1987. It was the first racing oval to feature a warm-up lane to enter and exit the pits, designed in part by driver Rick Mears. In 1993, the track was renamed Nazareth Speedway. In 1997, the facility underwent improvements, including a new retaining wall, catch fence, and new grandstands.
When the track re-opened in 1987, it was a slightly reconfigured 1-mile (1.6 km) oval (1.62 km). However, designers and participants were aware that it actually measured shorter than one mile (1.6 km). The banking varied between 2.7° and 6.0°. The back straight is 1200 ft (400m) and the home straight is 800 ft (260m). IndyCar participants often took advantage of the inaccurate measurement for fuel strategy, knowing that they were running a shorter distance than advertised. In 1998, for fairness and accuracy, the track was remeasured by the CART sanctioning body, and was advertised as 0.946 miles (1.52 km) in length. The race, which had been 200 laps, was increased to 225 laps for time value purposes.
Although the Nazareth Speedway hosted rather successful Busch Series and CART events, new owner ISC closed the facility in late 2004. The races were replaced with events at Watkins Glen, another ISC-owned track. The track is now up for sale, and may be resurrected if a strong buyer is found. Currently there is an offer to convert it into a multipurpose indoor arena. Access to the speedway is severely limited, and reopening as a professional motorsports facility is highly unlikely.
Although the track closed in 2004, it is still featured in the EA Sports video games NASCAR SimRacing, NASCAR 2005: Chase for the Cup, NASCAR 06: Total Team Control, NASCAR 07,NASCAR 08 (PS2), and NASCAR 09 (PS2) which are based on the 2004, 2005, 2006, 2007 and 2008 NASCAR seasons respectively.
As of May 2007, the grandstands, signage and all visible structures at the racetrack have been removed. The disassembled grandstands were transported and erected at Watkins Glen and Michigan International Speedway. The track remains fenced off and access to any part of the track or land surrounding it is restricted. The site of the former speedway is located on Route 248, which lies in eastern Pennsylvania's Lehigh Valley area. Rumors circulating around the speedway's replacement have included topics as housing complexes, or an also rumored sports arena.
Historical Google Earth imagery shows that by May 2008, large piles of earth were erected at various points around the track to prevent use of the racing surface. Images as of August 2010 shows those piles remain in place, though show signs of weathering.
Reactions: lani1066 and Ischemica