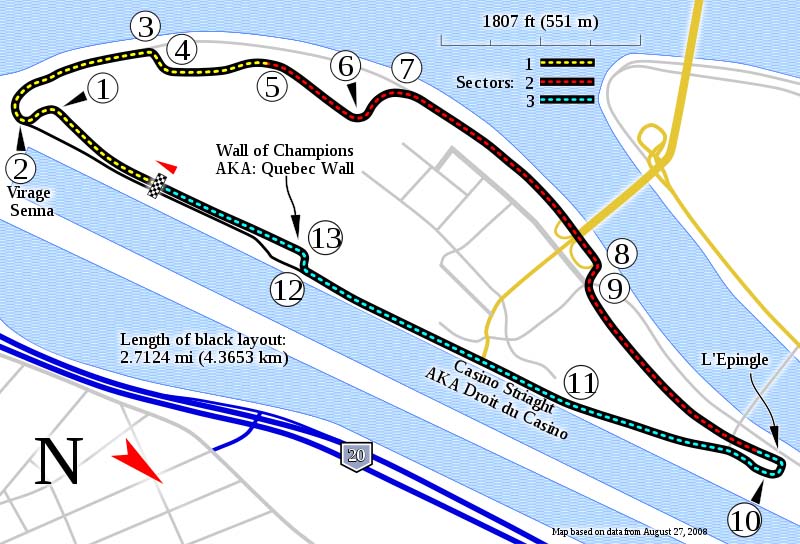 The Circuit Gilles Villeneuve is a motor racing circuit in Montreal, Quebec, Canada. It is the venue for the FIA Formula OneCanadian Grand Prix. It has previously hosted the FIA World Sportscar Championship, the Champ Car World Series, the NASCARCanadian Tire Series, the NASCAR Nationwide Series and the Grand-Am Rolex Sports Car Series.

The Canadian Grand Prix that took place for 30 years at Circuit Gilles Villeneuve was dropped from the 2009 Formula One calendar and replaced with the inaugural Abu Dhabi Grand Prix. On November 27, 2009, Quebec's officials and Canadian Grand Prix organisers announced a settlement with Formula One Administration and signed a new five-year contract spanning the 2010–2014 seasons.The 2011 edition took place on June 12 at 1:00pm (17:00 GMT) and was the longest World Championship Grand Prix ever, due to a lengthy rain delay.

Montreal 2008 by ISI converted by SLN(Luc Van Camp) and The Lonely and releasing it with their permission.

It has all of the new rf2 features in it, but there are still some bugs, like flashing fences that I may have an idea how to fix. So give it a try and enjoy.
Reactions: Bram Hengeveld