Introduction
It happened again. I intended to build a quick mod similar to my E46 so I had a nice open top vintage car to cruise around some free roam circuits, and I ended up spending 3 weeks building it instead. Here is the result.

This is a 1959 Chevrolet Corvette, the first generation chassis commonly referred to as C1. The 1959 reprises the 1958 facelift, but with slightly less chrome trim. Like most generation Corvettes, this was about the fastest car you could buy on a working man's budget, with 275 rated horsepower and weighing only slightly over 3000 lb, at a time when the typical American car was 19 feet long and weighed several tons. Due to the availability of data, this mod has roughly 300 wheel horsepower, the extra being gained via a racier cam, valve springs, and carburetor tune-up, allowing the redline to be raised 700 rpm.

The mod comes with many factory paint options as well as several racing liveries @glasshouse generously provided. If you have the Custom Shaders Patch installed, a few extra goodies are applied on the racing liveries - the license plate and rear facing spears are removed, and the chrome hubcaps are also absent.

Word of caution - this is 1950s technology. At its top speed of 130mph, the rear end has significant aero lift, the car is quite softly sprung, the tires are rubber balloons... in total the handling gets oversteery for the worse at this speed. What I'm saying is, if you try to drive the Fuchsröhre at wide open throttle, you will not survive to the top of the next hill.

Installation
Extract the content folder from the zip file to your root AC folder. As the car comes with a custom driver not wearing a helmet, this is necessary unless you happen to have already installed another mod using this same driver.
This will create content/cars/oneweek_corvette_c1/ and content/driver/driver_fedora.kn5.

Making Your Own Skins
The car's extension/ext_config.ini controls which of the extra features are applied on a per-skin basis. Adding new skins to the list is a matter of typing the folder name 4 to 5 times. If you intend to upload skins, you should make a copy of this ini inside the skin folder, that only has SKINS=your_skin_name.
You'll also have to edit these lines
INSERT=corvette_c1_steelwheels.kn5
to read INSERT=../../extension/corvette_c1_steelwheels.kn5 and so forth for it to work correctly from the skin folder. 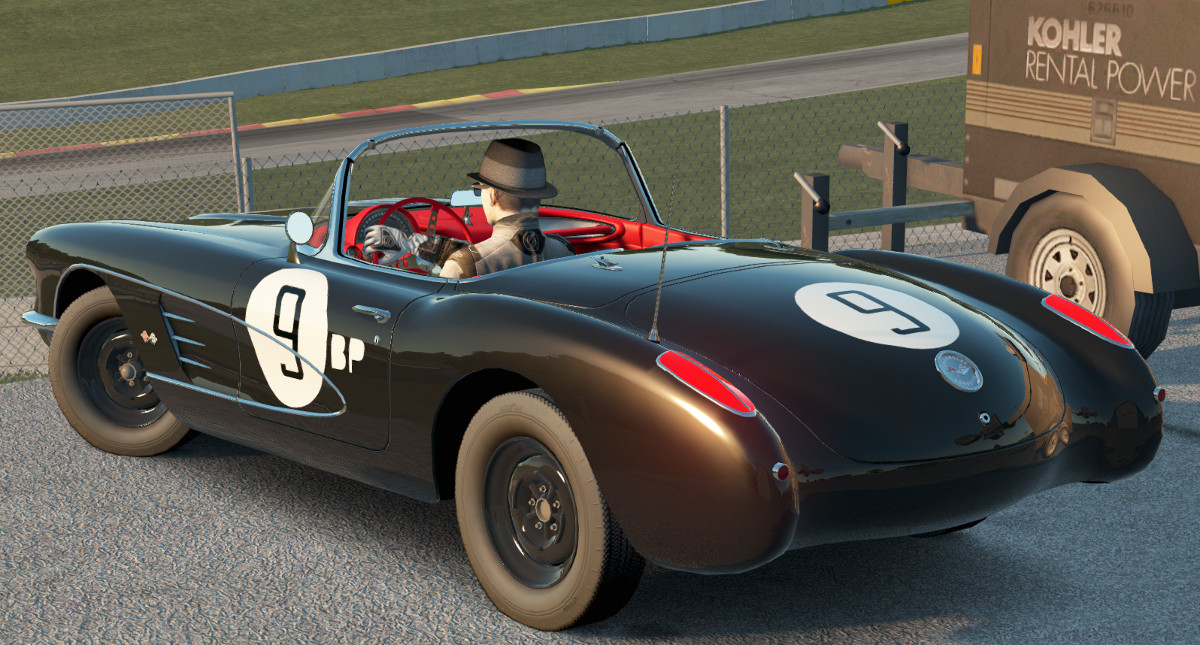 Etc.
This is built with an intentionally reduced feature set to allow the low production time. It's meant to be seen in motion, not stared at in showroom closeups. That means it's a relatively low poly model, and showroom features are not present - doors don't open. There are two LODs, the high LOD @ 50000 triangles, and the low LOD @ 700 triangles. Essentially this is similar to a LOD B and LOD D on a full-featured car. As such, I will be dealing only with bug reports related to problems experienced while driving.
Reactions: vegaguy5555, Ad_Schneider, Helzephyr and 53 others

Super belle voiture
Good work,love the Hat and Shades!
Great job, thank you!
Fantastic, like all your work! Love the old Vettes
car look really nice
What a beauty!
0k =)
Thank you. Love the chassis look, love the dashboard look, love how this 1959 car's suspension realistically bends in corners. --- Would love to see: Alternatives to the guy with the hat. --- Suggestion: James Dean and Marilyn Monroe look alike.
Wanted to drive this one since I was a kid and saw how Arnold Schwarzenegger 180-handbrake parked it in "True Lies"
Jokes aside this is the most stuning low poly model car I've ever seen! Drives great, especially when turns right ;)
This Corvette + LA Canyons = Therapeutic effect
Made a little promo for this beaut: https://youtu.be/hJ3bBTHcylo

And yes, brakes are fine, after all it's a car from the 50s
0k Thank =)
love this car, great job!
B/c the driver is wearing a fedora as any true gentleman from 1959 would
Looks, handling, sound (tires!) all excellent. Fun car to drive and imo the brakes work fine. Odometer is a nice touch. Maybe the front door pillars (chrome looks nice) should fit a bit better to the A-pillars ? Like now they seem damaged ?

Stereo
I just follow how it looks, they don't line up well cause the wind-up window has to follow the slot so it can't curve like the windshield does at the top.
What a gamer
One of my fav mods now! What a car. P.s. The brakes are quite bad ..is that normal for cars of that era?
Thank you, looks amazing.
Awesome!
While its not a showroom model, the visuals (especially in VR) are really nice. It handles pretty accurate to the era, and the sounds are awesome
great car , handles like a boat exactly how an old yank tank should , love it
Thanks so much for creating such a fantastic mod. This car was just made for the LA Canyons.
Read more…
21 comments
RaceRoom Racing Experience | WTCR 2020 Now Available
38 comments
Assetto Corsa Competizione | Another Hotfix is Here!
45 comments
Gran Turismo 7 | Release Delayed Until 2022