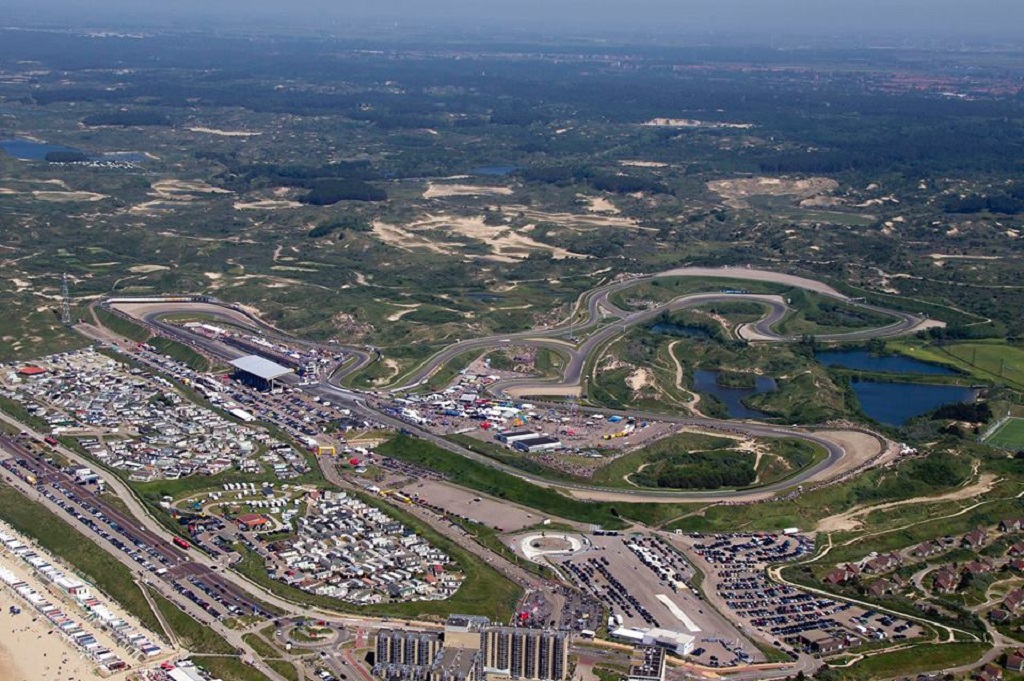 Having confirmed a deal to secure the return of the Dutch Grand Prix 35 years on from its last appearance on the Grand Prix schedule, many drivers and fans have voiced their concerns over the potential for a processional race thanks to the renowned lack of overtaking opportunities at the historic Zandvoort circuit.

These concerns appear to have been shared by the man behind the return of the Dutch Grand Prix, former Formula One and Sportscar star Jan Lammers, himself a highly accomplished racing driver and someone who knows the Zandvoort circuit perhaps better than most.

Having secured the deal to bring Formula One back to the Netherlands for the first time since the 1985 Dutch Grand Prix at the same circuit, Lammers is confident that the planned changes to the layout of the track will be enough to ensure better racing is possible than is the case with the current configuration used by such series as the WTCR in recent years.


"The Gelachbocht, the open right hand corner, Turn 3 effectively, will get a bigger run-off area," Lammers told Motorsport.com. "Turn 4, the Hugenholtz hairpin up the hill, will have a wider inside, to make the corner more fluid, so it won't be a stop-start corner.​
"The same thing will happen with the S-chicane, or the Hans Ernst Bocht. That will also become more fluid by putting more tarmac on the inside.

"And then the Arie Luyendyk Bocht will be accommodated exactly to his liking, as it will be a little bit more like Indianapolis, because it will be banked.

"It will be banked in such a way that you can go flat out with DRS open, and in that way we hope to encourage more overtaking for the Tarzan corner. It will be 17 degrees, so the corner will have the same character as the last corner in Brazil."​
As well as making changes to certain key corners and runoff areas around the track, Lammers is also confident that the particularly short pitlane could encourage more teams than usual to gamble on a three stop strategy next year, something that the recently retired endurance and Le Mans driver hopes will add another variable into the racing and help promote more on track action.


"The other big change to enhance overtaking will be the pit entry," said the 62-year-old Dutchman. "That will be made quicker. So we will have pitstops of maximum elapsed time 14 seconds. If we do that we hope that we can create three-pitstop strategies.

"And as we all know it's the pitstops and the confrontation of old tyres versus new tyres, that is what creates the overtaking. That's why the philosophy around the pitlane has changed.

"Also the start/finish is moving a little bit forward, towards Tarzan, to make sure that in front of the main grandstand you can see the whole field."​
Zandvoort has always been a favourite with drivers thanks to its difficult and technical nature combined with a fast and flowing rhythm, but often the track produces processional races devoid of any serious overtaking opportunities - even in categories that depend much less on aerodynamic influences than is the case in modern Formula One.

Will the changes proposed by Lammers be enough to spice up the action when the Grand Prix field visit next year, can fans get in and out of the circuit without being stuck in seemingly endless traffic jams? Only 12 or so months until we find out!

I hope they do not f*** up. Zandvoort is an amazing venue. We will go there again this year for the GT Masters race. I fear with "F1 modifications" the venue will loose some of its appeal of a more national circuit vibe. You know, more laid back security, close access of fans to the pits and paddock, etc.
I've been to Hockenheimring, Nuerburgring, Spa and Zandvoort so far a spectators and Zandvoort was by far the most relaxing, intimate and with an almost familiar atmosphere. We really felt "at home" there.
In my opinion they should just leave it as is. F1 who?

So they're taking three of the turns with the most characters and removing what makes them special?

What it really means:

"Zandvoort Changes Aim to Ruin Zandvoort For Everyone"
S

Modern F1 is the problem, not the circuit! Yet another brilliant track butchered for a broken formula!
100% of my motosport interest is in F1, and 100% of it is devoted to historic F1.
Glad I can still slide my 50s/60s/70s F1 cars around Zandvoort in AMS.

Taking classic tracks and making fundamental changes to the layout doesn't work - take Barcelona as an example. That chicane they put in at the end of the lap ruins the flow of the circuit and has it actually made any of the recent Spanish GP a good watch? The changes at Monza make me shake my head in frustration every year. Those car park like run off areas which make a mockery of the skill needed to perfectly judge the braking zones. Parabolica and the run off on the outside is particularly unnecessary.

I really hope Zandvoort isn't another case of modern F1 came here for a year or two and the classic circuit was ruined forever.

Jayblue said:
The changes at Monza make me shake my head in frustration every year. Those car park like run off areas which make a mockery of the skill needed to perfectly judge the braking zones. Parabolica and the run off on the outside is particularly unnecessary.
Click to expand...

The changes made at Monza was for bikes since it's very much safer for someone to slide across tarmac instead of hitting gravel and tumbling.

I don’t believe a word of what they say. They say they need to make “minimal changes”. I call BS. They will butcher the track and it will be ruined forever for the horror sh** show that is modern F1.

Banking the final turn so it can be taken flatout with DRS open seems so backwards to me.
Pandering to a band aid fix for a formula that has so many issues that aren't the tracks they race on...

Leave it as is so it's hard to actually drive through it fast. Now it will just be another auto pilot corner with no skill required.

I know from racing there is Sims, you need to be able to maximise your line and speed through there to have a chance at an overtake at turn 1.

An overtake some has earnt by using their talentto take the corner better than the person in front is 1000x better than another artificial DRS overtake.

These changes don't just last the F1 weekend. Track ruined for every other class that races there...

Um guys, your defending g a track layout where historically there is virtually no overtaking in any category of motorsport that goes there, why would you want to protect that? Makes no sense!
They have said the changes are to improve overtaking, why wouldn't you want that? The changes would help more than just F1 in the longer term.

Zandvoort have been my go-to simracing track for many years now. Love the layout, or should I say "loved".

Thing is, over all those years I've been seeing the comments (here and in other places) that this track is super boring for racing, yet great for driving, or that is a meh track. What I actually didn't share, because doing some offline enduracing races, trying to catch up with AI prototypes, avoiding the traffic - yes is hard, but it maximizes all your focus. But people were generally complaining about track layout and lack of overtaking.

Now, curiously, people are complaining about them runing the track (which was kinda expected from day one since F1 return was announced). Go figure...

There are ways to keep the layout fun, while bringing the big offline zones, so there can be some little hope. Although, reading about final corner, not sure there's actually hope.

But huh, if there was any behind-the-scenes choice between remaking it for F1 and gathering more public; or destroying it for another housing area, i'm all for keeping the track, even if it has to change.

DrRob said:
I hope they do not f*** up. Zandvoort is an amazing venue. We will go there again this year for the GT Masters race. I fear with "F1 modifications" the venue will loose some of its appeal of a more national circuit vibe. You know, more laid back security, close access of fans to the pits and paddock, etc.
I've been to Hockenheimring, Nuerburgring, Spa and Zandvoort so far a spectators and Zandvoort was by far the most relaxing, intimate and with an almost familiar atmosphere. We really felt "at home" there.
In my opinion they should just leave it as is. F1 who?
Click to expand...

That made me think, if I could push a button and bring F1 to my local track, would I? Honestly, I don't think so. Yes, that would be incredible, but the changes that would have to be made would ruin the comfy nature of the track as it currently exists.

Hmm, on one level, l guess it's good they are trying to be responsive to fan concerns...but I also am made very nervous at the idea of carving up a perfectly good track.

People need to figure out that not every track is going to be f***ing Baku and produce lots of controversial racing. Sometimes the specialty of a venue is about the experience of driving the track, the atmosphere, culture of the area, and having it bring something different to the schedule. All these immediate complaints of Zandvoort not producing passing are pointless as F1 throughout recent history has never produced any passing. Name just 1 single season in the 2000s where 3 or more teams were fighting for the majority of the season. If you want lots of passing and close racing, don't watch an engineering sport where the richest teams with the best technology will win. Instead, watch GT or touring cars or NASCAR or literally any other form of racing for that.
Last edited: May 19, 2019

"More runoff" =/= more overtaking. I mean even Max knows by now that the runoff doesn't help you to overtake...

It just means that the nature of the track will be blasted away and it'll still be almost impossible to overtake.
Last edited: May 19, 2019
You must log in or register to reply here.