Mod tested only on REALISTIC difficulty.
**If you encounter bugs please contact me**


Common issues (probably cannot be solved):
-AI goes a little bit wide in braking after the long straight in Austin and
at the harpin in Philip Island
-AI quali lap times are still not fast...
Click to expand... 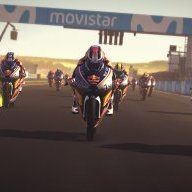 Hi Jonix. What tool do i need to extract these files and then repack in SBK X mode?. I have only ever replaced data.mix before. Can you help?.

AI is very slow in qualify on Sachsenring and Indianapolis, even slower than real records (something like 2 sec slower in Indianapolis) but in race they are much faster and challenging.

A fix is coming for particular tracks qualifying

Fix for some tracks laptimes

I've put two different DATAs in the mod, read below for further instructions and changelog.


Extract your data.mix after you've done a BACKUP of it.
Copy and overwrite the DATA (STANDARD CIRCUITS) of the mod.
Repack using SBK X mode.


In some tracks AI is still too slow in quali (Austin, Philip Island, Sachsenring at least, but you can use it on any track if you think AI is slow in Quali.)

So, when you are going to race there, I strongly suggest you to use the...
Click to expand...

Read the rest of this update entry...
G

I raced on Sachsenring and Indianapolis and I noticed Bastianini and Fenati are still too slow (around 11th and 14th position respectively), while Navarro is too fast (4th position in both races) and Quartararo even won in Indi, is it normal?

It just depends on which race, how you race. If you put long % race distance, AI has the chance to overtake. Fenati usually makes bad qualifying (at least in the first part of the season), so even if he's as fast as Quartararo, he needs time to overtake.
If you wish you can edit Fenati and Bastianini qulifying (lower them, lowering makes them faster) performance and lower Navarro and Quartaro perfomances (0.996 and 0.998 I'd say).

I made a battle with 7 riders for the win in Argentina.

P.S. To everybody: I recommend using tyre wear on
D

Very good mod, Thanks. Can you do the same mod for Moto 2 and Moto GP please ?
M

On some tracks ( Aragon,Sepang and Assen) AI is "fast enough" im Q but race pace is 1-1,5 sec faster than quali times.

Yeah, but this doesn't affect race pace which is crazy in Sepang.

I was 8th in quali 0.5 sec behind Kent and i finished 16th because Ai make low 2:10 in race. On most track i was able to finish 1-8 in ongetta rivacold team, but sepang is pain in butt.

I like your mod. I Was 2,5 faster in qualy and race before this.

But i have a problem. I´m doing a GP in Brno with Leopard/custom rider. In Qualy i´m totally in pace. Pole lap was 1:04:1 and i´m finish second in the grid with 1:04:2. The problem is in race when the AI become a half second faster around 1:03:7/8 and i struggling to much to follow the leading group. I think this is not normal...i want the same race pace or a little bit slower like the real life.

Using the "standard circuits" data. Maybe is because i´m racing 25% of race distance and this works only at 100%? Thanks in advance and for the effort for mod this game too Jonix you are great. Sorry for my bad english.

Any trick to make races much closer?
I changed DATA/VEHICLES/AI/SKILLSCATALOG.XML following the table below but the riders are widely spaced anyway. On 10 laps race I'd like to see groups of riders in less than 1 second or so, like happen in real life. 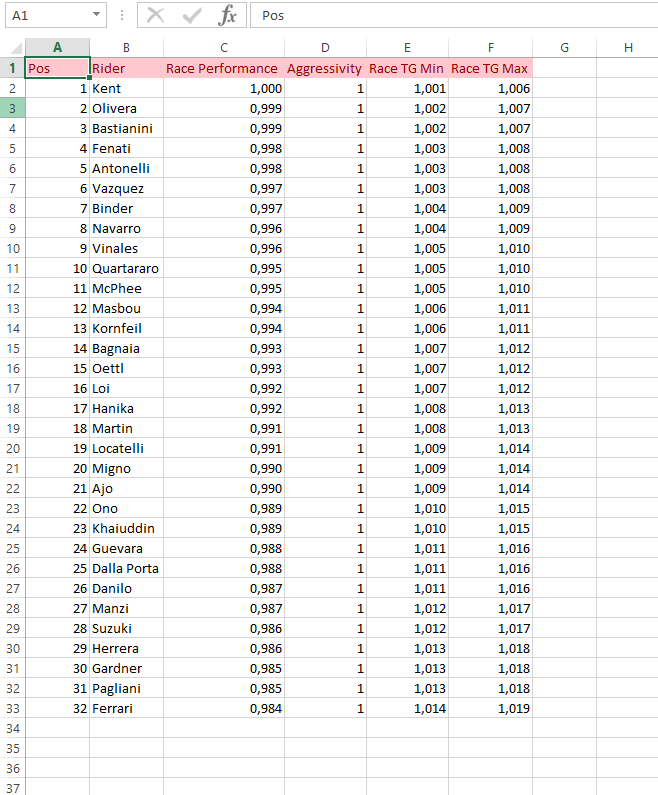 Unfortunately you can't input values with different decimal numbers than default one. Though you could edit the values and set it to the same for the pack. Ex pack 1, fastest riders: quali skills is different, but you can set race pace the same like 0.999 for Quarta, Navarro, Fenati, Bastianini (Kent has 1.0) Then set the others to 0.98x and son on If I remember "slowest" riders have something like 0.96x just set it to 0.98x and should be fine for the race. There may be no overtakes with all riders following in line but I doubt so, because MotoGP15 has a slipstream effect and rider's aggressivity params that make them overtake a lot compared to past series

EDIT
Nevermind I see you already did it. The problem is MotoGP15 has a sustem to avoid riders get one into another, so if AI riders spot a rider in front that stops, he stops himself trying to avoid a crash.
It looks retarded but it is the way it is..you could try fix that amount, I don't remember the name, but you'll realize what it is when you read that
Last edited: Nov 1, 2015
You must log in or register to reply here.
Share:
Facebook Twitter Reddit Pinterest Tumblr WhatsApp telegram Email Link
20 comments
Sim Coaching Discount | Driver61 Sim Pure Pace Masterclass
29 comments
This Is Cool... New V10 R-League Esport Series
18 comments
RaceRoom | DTM 2020 Talk 'n' Drive
54 comments
rFactor 2 | 2020 Bentley Continental GT3 Arrives Wednesday