Global Formula Automobilista accelerates ahead in time by a decade, as we descend on the Formula V12 mod for mid-1990's F1 cars for the second season! Max Verstappen and NLE Motorsport took the titles in Season 1, pushed hard by Harvey Racing and DTK Racing all season. Can they keep that up into Season 2?

As numbers are increasing, this is expected to be the last season as a manager type game, rather than a drivers one. All races will be simulated by me, the host @Jimlaad43 on my personal copy of Automobilista.

All changes from the previous season are highlighted in purple. 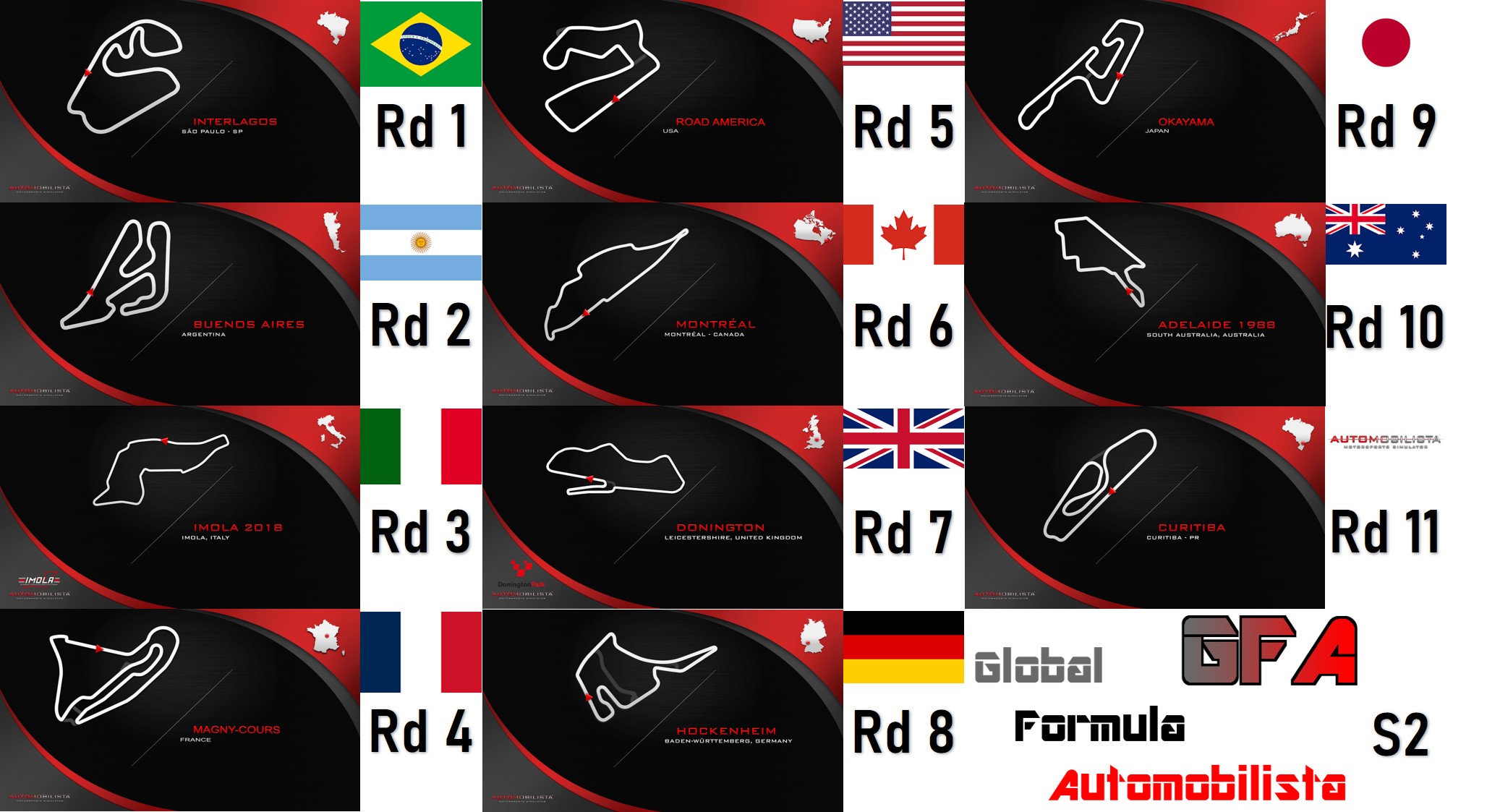 The Cars
The cars used are the default Formula V12 (F1 1990's). The template can be found here - https://www.mediafire.com/file/mzwten6zfz3kh2c/V12.rar/file - made in collaboration by @Meff28s and myself. Please feel free to download this template and edit it as much as you like to create your unique livery for your team. You will have two cars in the team, but they must have about 90% of the livery the same. You can change small things to make it nice and easy to identify the different drivers.

The drivers
The drivers all have unique talent files, which will be randomly generated upon purchase. Each attribute that can be edited will be randomly generated, with the range of numbers depending on how much you want to spend on it. You will have a budget for both drivers, which you can spend on reducing the range or moving it for each attribute. All numbers are percentages out of 100.

Engine reliability is also simulated. This is formed by a standard variation curve which I have setup so that your engine has a 25% chance of failing after 1hr 30mins hours of driving, and a 50% chance after 2 hours. When that 25% chance time has passed in a race, it is colloquially known as "Squeaky Bum time". Each credit you spend on reliability adds a second to the average , and therefore moves the 25% and 50% time along by however many seconds you buy. So for example, if you spend 600cr, you'll push the 25% failure to 1hr 40mins and 50% to 2hr 10mins.

Engine Power is capped at 1.10x. At this point you are no longer able to buy power for your engine.

Pre-Season
Random Generation
Talent and Engine power will be randomly generated within a range of values at the start of the season. The randomiser is designed to make sure that all drivers on the grid should have different skills at the start, especially if a lot of people make the same buys.

Mid-season
To preserve competition and reduce runaway or fallaway teams, there will be a price change depending on your Constructors Championship position for buys once the season has started. Range and randomisation is not a thing after this point.

Sponsors
Sponsors will give teams targets to reach in a race. if they are met, you will be given the bonus reward they say. You may switch sponsors at any time you want, but the cost of this is 500cr. 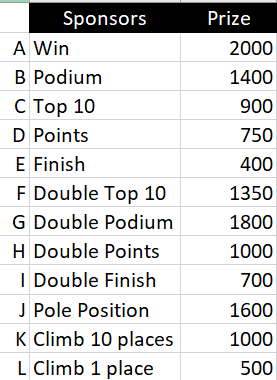 Rewards
Between races you will be able to spend your winnings to upgrade your car or driver. Credits will be awarded for finishing position. 500cr and 1 Point will be awarded to the driver on Pole Position.

Any buys made once the season starts will not be randomised. If you buy 5 Speed or 0.03 Power, you will get those values.
If you fail to make buys, or don't spend everything in your account before randomisation, you will lose half of that money once the randomisation occurs.

Late joining
If you decide to join mid-season, you will follow the same process as the original teams, except your budget will be 4000cr + 200cr for each race missed. Your values will be randomised as normal for the first round you are able to enter. Mid-season teams must have a livery prepared before your first race.

Carryover to next season

No team will carry any money over between seasons. You must spend all your money before the last race if you don't want it to go to waste. Any money earned in the final race of the season will be converted into an automatic reliability buy for next season. That is, every 100cr you get from the Automobilista Grand Prix will equate to an extra 5 seconds of reliability before any buys.

All teams will once again start the season with 4000cr to spend on your drivers and car for the same range randomisation process as we had this season. There is a small amount of Prize Money for constructors championship standings.

All driver stats will be reset. Teams can nominate up to one driver in their current driver pairing to stay in the team, everyone else will be "out of contract". Then I will allow managers in constructors championship order to choose their second driver (or first if they didn't keep) in order. You can choose a driver you previously used if they're available. Otherwise, you can completely replace your lineup with new drivers for the series, or steal someone from another team if they didn't "lose" their contract. This is just a way to shake up the grid.
Grid Size
The grid will be limited to 32 cars. In the event that we have more than 16 managers signed up, Pre-qualifying will occur in Practice. The slowest of the drivers in the bottom 10 of the championship after the Practice session will be declared as Did Not Qualify and will therefore not take part in the race. As many as are required to be kicked out will be depending on the number of drivers. If the grid is full and a new team joins, the new team's two drivers will be guaranteed to start their first race at least without needing to Pre-Qualify. Every driver that fails to qualify will be awarded 400cr as compensation.
Last edited: Jun 28, 2020 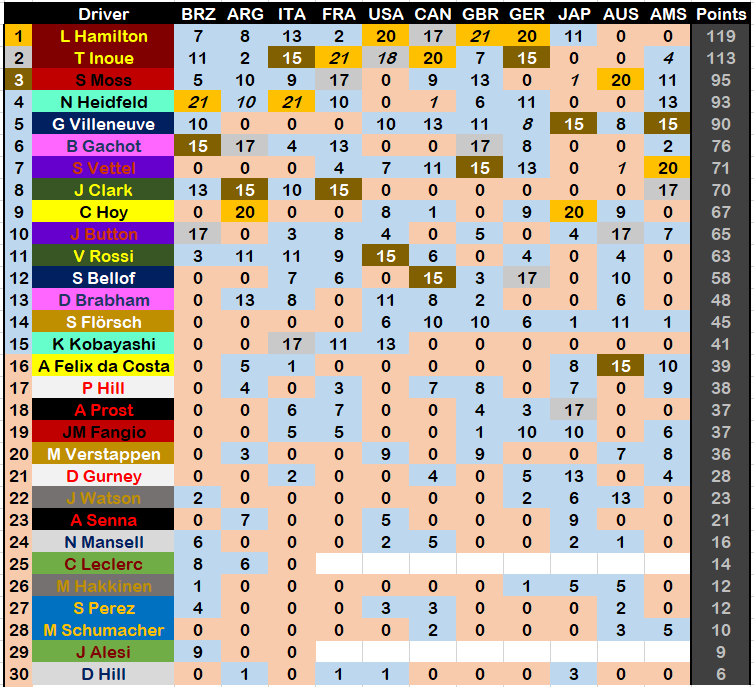 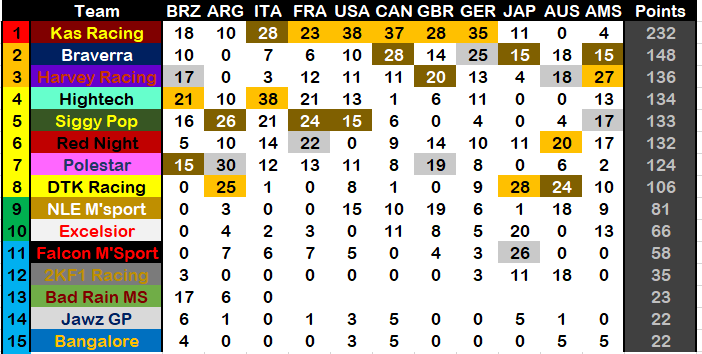 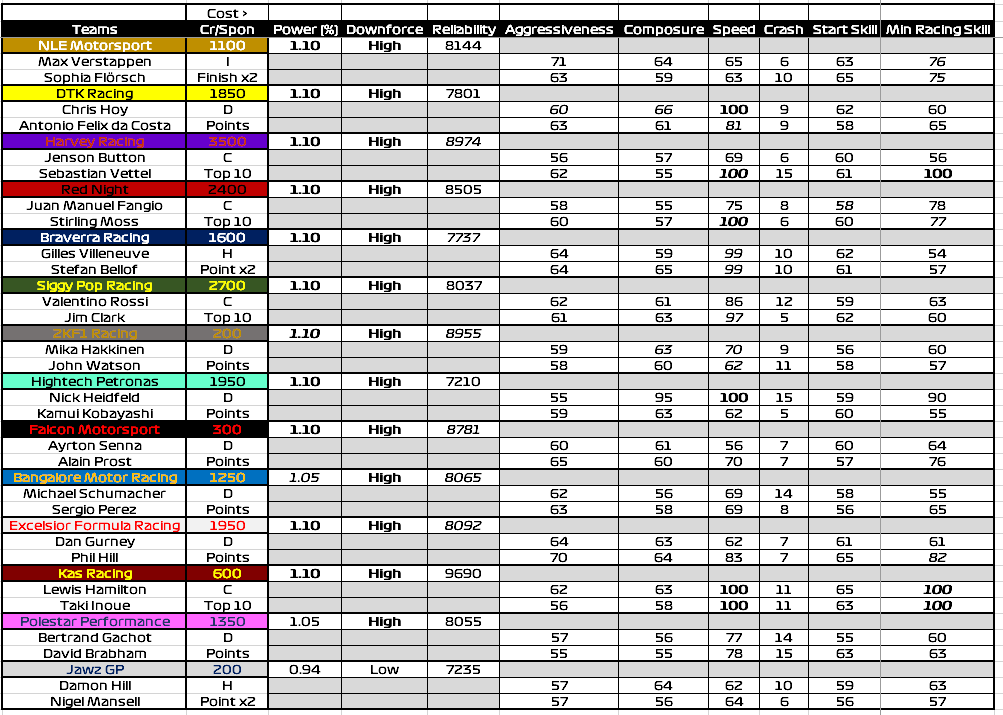 You are only allowed to carry over 1 driver from your previous team initially. Once every team has declared which drivers they want to keep, I will then let managers choose their second drivers from the pool in Constructors Championship order. If you do not wish to keep your drivers and want to bring in a new driver who wasn't part of season 1, you can do that at any time - new drivers are first-come-first-served. No driver will carry any stats across from a previous season, so there is no advantage to taking a good driver from a previous year. Car numbers are reserved to the same driver. You can change a driver's number once they are in your team, but you cannot take a number that another driver has used - unless that has also been changed, or they are not on the grid themselves.

Each team will also be required to select a primary livery colour, which must be unique. I like a multi-coloured grid. I straight up refuse to have 10 teams with 5 of them varying shades of grey. It worked brilliantly last season, let's do it again. Because of the limits of naming conventions for different colours and the ever-expanding grid, I'll say that we should define a secondary colour of the team as well. As long as your combination of two is different to another team, you can get away with having similar main colours.

Teams can opt to change their main livery colour, however you must still adhere to the one colour per team rule. If you wish to change to another colour that is in use, please talk to that user beforehand and negotiate a compromise. Otherwise, any livery is fine.

New rule for colours has just been added to allow for similar primary colours, and that we're running out of distinct colours in the English language. If the already signed-up teams could please confirm their secondary colours, that'd be handy

Because of the limits of naming conventions for different colours and the ever-expanding grid, I'll say that we should define a secondary colour of the team as well. As long as your combination of two is different to another team, you can get away with having similar main colours.

im alright sorry @Jimlaad43
thanks for asking though

I never had any rules about numbers. #00 is fine. The only rule is that only Max Verstappen can run as #1 this year.

Jimlaad43 said:
I never had any rules about numbers. #00 is fine. The only rule is that only Max Verstappen can run as #1 this year.
Click to expand...

inb4 someone comes in with π

Millsy24 said:
inb4 someone comes in with π
Click to expand...

A easy/tiny tip for car painters :
Automobilista comes with a big load of F_V12 liveries and some have a very nice design ! Take a design you like, and put it in the template file to use it as a base. "re-paint" it with your own colours and logos
Last edited: Jun 18, 2020

Also there will be no Yugi Ide