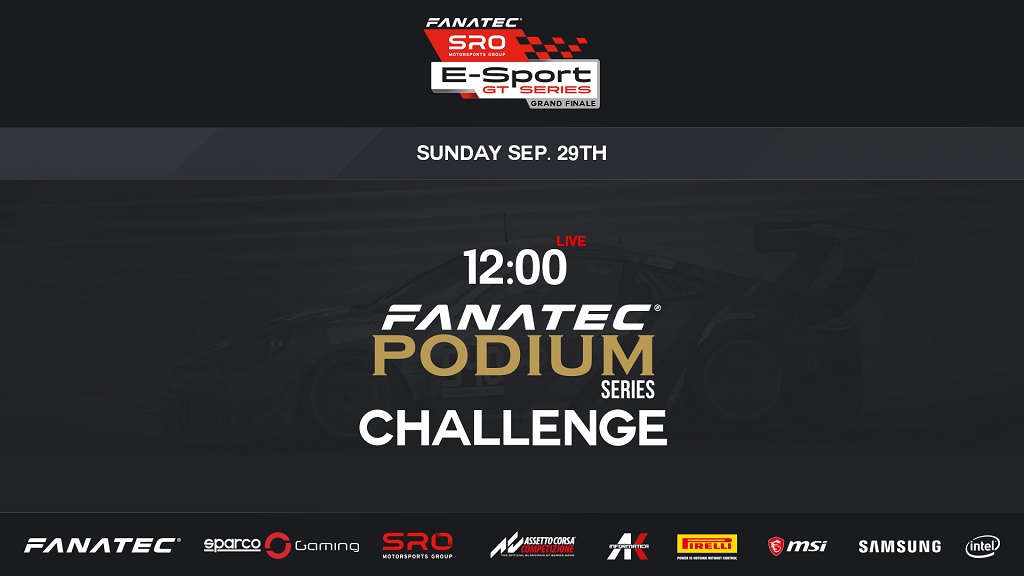 With the very first season of the SRO E-Sport GT Series set to conclude as our grand finalists duel it out at Barcelona for the chance to win a fantastic Lamborghini Squadra Corse racing experience, Sunday 29th September will see the series organisers host a very special one-off event at the Circuit de Barcelona-Catalunya - introducing the Fanatec Podium Series Challenge live and exclusive on RDTV.

As the main SRO E-Sport GT Series comes to a head in the grand final at Barcelona on Saturday, where our 12 finalists fight it out for the main series title, Sunday 29th September will see the stunning Porsche 911 GT3 R take a star turn in the Fanatec Podium Series Challenge.

With the broadcast set to begin from 13:00 CEST on the RaceDepartment Twitch TV channel, the Fanatec Podium Series Challenge special event is dedicated to the race public and will culminate in a final round showdown at the beautiful Barcelona-Catalunya circuit on Sunday afternoon, giving our competitors the chance to race on the world stage and try to win some awesome prizes from Fanatec and Sparco Gaming.

Featuring the Porsche 911 GT3 R, Assetto Corsa Competizione and plenty of high performing virtual race stars of tomorrow, this coming Sunday should be another excellent opportunity to watch some fantastic racing action - and win some cool sim racing gear!

Not excited enough yet? Check out the new trailers from Fanatec and Sparco below:

Paul Jeffrey
RaceDepartment Editor-in-Chief, occasional YouTuber, commentator and broadcaster, with a passion for motorsport on both the real and virtual racetrack.
Reactions: coolwhip21, jacksorensen, Fat-Alfie and 1 other person