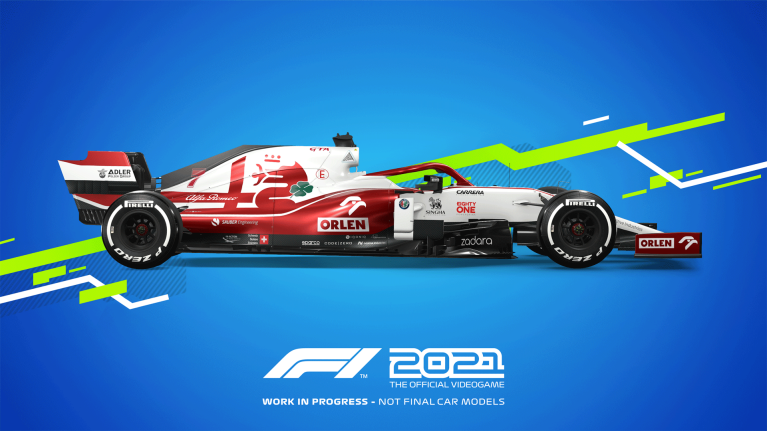 The latest iteration of the F1 franchise has been revealed by Electronic Arts and the trailer is intense to say the least.
I'm not afraid to admit that i'm not the biggest F1 games player, but, i'm a sucker for a single player career mode. So I was quite intrigued by the F1 2021 reveal trailer which is if anything cinematic AF! It's fair to say that this looks like it will be the key selling point for the latest title, even if details are a bit thin on the ground at this early stage.

How far will you go before you reach your 'Braking Point'? It’s time for the next generation with F1® 2021, the official videogame of the 2021 FIA Formula One World Championship ™. Racing onto your PS5, Xbox Series X|S, PS4, Xbox One, or PC via Steam on July 16, F1® 2021 is packed full of brand-new features, which we’ll take a closer look at right here.

What’s new?
Braking Point
Go on an epic journey with 'Braking Point', our brand-new story mode. Rise from the ranks of Formula 2™ to a shot at stardom in the world of Formula 1®. Experience the lifestyle both on and off the track as you take your seat in the pinnacle of motorsport.

That’s not all. After his infamous debut in F1® 2019, Devon Butler is back. We’ll have plenty more to reveal about him and our brand-new story mode, Braking Point in the coming weeks.

Two-Player Career
We’re also excited to reveal a feature you’ve requested for a long time – the ability to play career with your friends, either co-operatively or competitively. As each player will have complete control over the assists, you’ll be able to enjoy the game whether you’re a veteran or a newcomer to the series.

Real-Season Start
F1® 2021’s 'Real-Season Start' feature lets you jump into this season's action, reflecting the live standings, and then you can take over and drive the remaining races. Great for players who want to jump into the season to align with the real-world season.

Next-Generation Experience
For the first time, F1® 2021 is coming to Xbox Series X|S and PS5 with visual uplift and faster loading times, alongside PS4, Xbox One and PC via Steam. And if you’re planning to upgrade, we’re very happy to tell you that F1® 2021 will support Xbox Smart Delivery and PlayStation’s free upgrade if you’re switching to an Xbox Series X|S or PlayStation 5*.

What’s returning to F1® 2021?
Features you know and love from F1® 2020, such as My Team, two-player split-screen, shorter seasons, accessible options, and F2™ aren’t going anywhere. We’re also expanding and refining many other features, including scalable assist options, driver stats and multiplayer.

Pre-ordering
If you’re excited for F1® 2021, you can pre-order right now. You’ll get the Braking Point Content Pack, a set of exclusive in-game items inspired by the new story experience’s fictional stars, and 5,000 PitCoins.

We’ll also be adding three new circuits, Portimão, Imola, and Jeddah*, which will be available to all players as free** post-launch content.

No VR no buy, no chicken nuggets no buy, no errr free steering wheel no buy. Yes I'll still buy it and not play it like the last one.

James Burton said:
No VR no buy, no chicken nuggets no buy, no errr free steering wheel no buy. Yes I'll still buy it and not play it like the last one.
Click to expand...

+1
I see more modding content to mess around with. I'm game.
no VR, no buy
A racing simulation preview that previews ZERO racing. The music may have been dramatic, the scenes certainly were anemic.
Well nothing fancy here.....another copy and paste.....sadly new tracks are a plus though

davehenrie said:
A racing simulation preview that previews ZERO racing. The music may have been dramatic, the scenes certainly were anemic.
Click to expand...

It's an announcement, not footage trailer.

I am getting hyped for this, which may end up in me being very disappointed. I did enjoy F1 2020 though. First F1 game in ages I've actually really enjoyed
If I understood the trailer it's going to be racing on the tracks and Tekken in the pit lane.

RinusDirtRally said:
Remember no Pre-order. It's EA now. Not Codies.
Click to expand...

No pre-order should be the mantra for whatever game, from whatever company, unless you have solid reasons for knowing that the game will be good/great. For me, being a beta-guy in F1 2020, I knew I liked the way the game was, so that helped out.

I know it's not Christmas, but this describes the pre-order stuff so good.

Lyrics:
Just one more preorder, the publisher said
Then we will unlock a cool hat for your head
You'll save 10 percent if you order today
The game is not out yet but we ask you to pay

The previews are glowing, so make no mistake
this game is amazing though the screenshots are fake
But check out this gameplay it's a vertical slice
so before you have played it, please put down full price

We love all the fanboys so we ask you to pay,
for our unfinished product that we'll patch the 1st day
It's still bloody broken 6 months down the line
But you got a free skinpack so it all turned out fine.

I trusted the trailer, oh why would they lie?
They gave an xp boost so I just had to buy
This game is atrocious, it should have been free
But I just cannot wait to buy the dlc.
Click to expand...

Next please...
Waiting for EA annoucing that F1 games are going to be made in the Madness Engine and to reintroduce all the classic content. If not, well, no buy.
Nah. I got Formula Hybrid 2021 with Community skinpack. No need for EA trash when I can drive a million times better quality F1 car. And I'm not overly excited to pay real world money for PitCoins, whatever the hell they are.

btw, am I autistic or something because I don't get super excited about these "cinematic" trailers that show basically nothing of the actual game? I mean, they are kind of cool and all, but they have next to nothing to do with the actual game.
Last edited: Apr 15, 2021

davehenrie said:
A racing simulation preview that previews ZERO racing. The music may have been dramatic, the scenes certainly were anemic.
Click to expand...