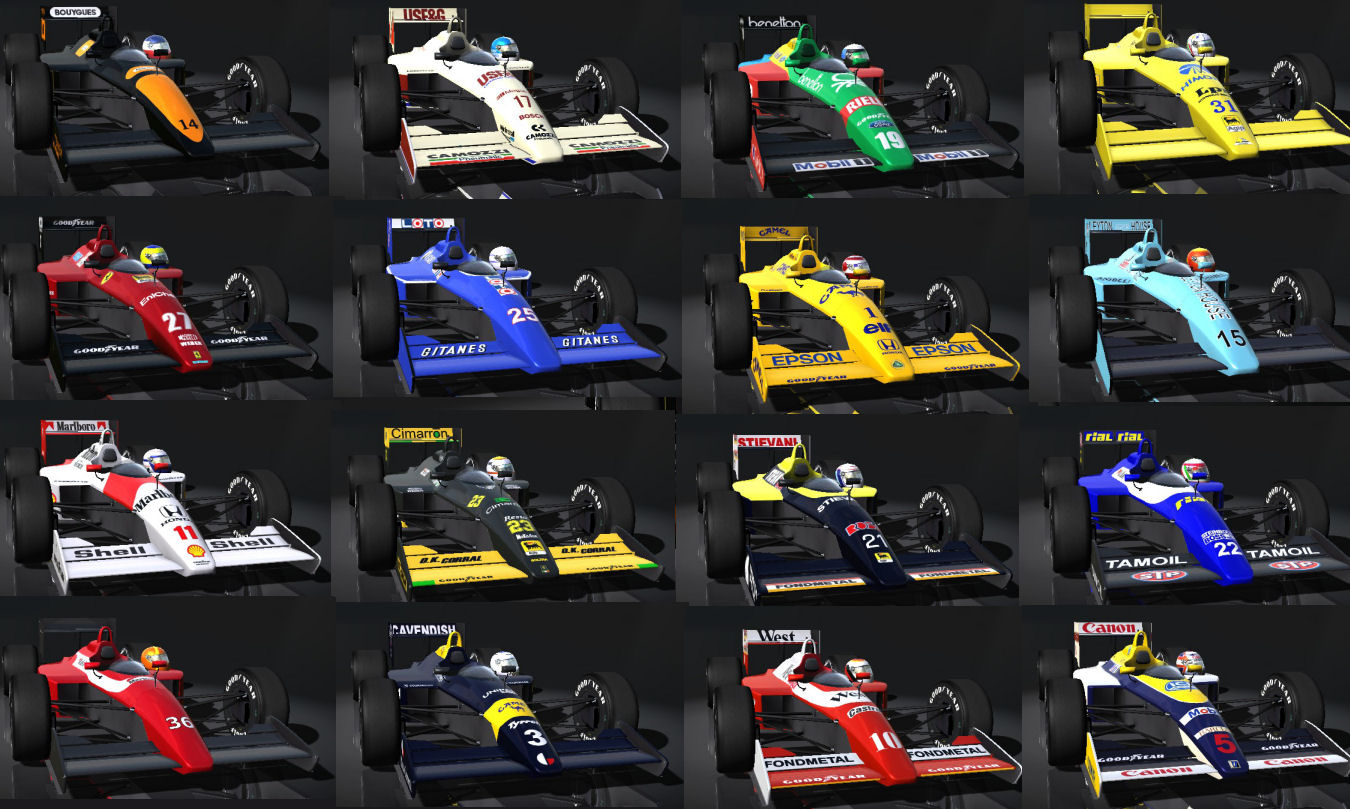 
In this readme file:
1) Credits
2) Changes in this version
3) About this skin set
4) How to install
5) Setting your AI difficulty
6) About the Offline skinset
7) Previous changes
8) Known Issues

1) CREDITS:
As always, thanks to Reiza for the original templates & files used to paint these skins & create the updates.
The electronic dash part of this mod is an adaptation of my GSC2012 version, and Nick of Reiza is to thank for his original help in accessing Reiza's digital dash files.

2) Changes in this version:

Driver Talent and Car Performance figures completely re-worked to create a more consistent challenge against teammate and other opponents, and when swapping between different cars.

NO original files are overwritten by this mod. It will create a separate menu heading and your default Formula Classic cars will still be intact.

There are two sets to choose from -
1) single player version - use these offline if you want the best, 'realistic' performance variation between the cars. In this set, the Mclarens will usually be out front, and cars such as the West and Osella will be near the back of the grid. You will be unlikely to score points in an Osella, but your challenge is against your team mate and other backmarkers, and you will also need to watch your mirrors & drive your own race without getting in the way of Senna/Prost etc when they lap you;
and if you choose a front running car such as McLarne or Ferrari, then you should expect to be winning or getting in the points, so your challenge will vary depending on the car you drive.

2) multiplayer version - all car physics are default, so cars will be identical - use these for online leagues, or offline if you want close racing with default car behaviour (race order may not be realisitc to 1988 though, as AI lap times will be very close without the addition of power/aero variations).


This is version 1.00. The talent files and performance variations may still need some adjusting, but it is now working well enough for some good 1988 F1 racing.

I recommend a mod manager such as Jonesoft Generic Mod Enabler - it will install or remove this mod automatically for you and the files provided here are already in the correct structure.

IMPORTANT - if you already have my 1991 skins mod installed, make sure it is at least ver 2.55 - there may be a conflict of files if you have earlier versions of the 1991 mod installed.

No files are overwritten by this mod.

Important - you can enjoy this mod on whatever settings you choose, but to feel the best effect of the performance variations, try the following settings:

i) Aggression of AI should be set on low - this is F1, it should be non contact, and it will help the AI drive more cleanly. DON'T WORRY that this is a low setting - with the performance differences, the AI will still overtake backmarkers/slower cars far easier & I think, more realistically than usual.

ii) *** Ensure that you match your ability to your teammate. ***
For example, if you choose to drive in Alboreto's Ferrari, then you should go to a PRACTICE session (not Test Day! as this is too easy compared with a race event) and make sure that it is *extremely* difficult in a practice session, on low fuel, to beat your team mate, Gerhard Berger in the other Ferrari.
If you are competing easily with your teammate in Practice, then you need to go back to main menu and raise the difficulty.


Once you have it set correctly, you will find the other cars' performance is correct compared to your car - and if a McLaren then passes you like you are standing still, you are probably nearer the correct setting! (unless you are in the other McLaren LOL).

The performance of each team has been varied slightly. This means that, as in the 1988 season, the McLaren will have a bit more power, be capable of braking later into the turns, & be aerodynamically more efficient, while cars further down the grid will be less capable in these areas. Of course I know the real cars had far more differences than this, but this is the most predicatable and consistent way to create the necessary variation, while still retaining the original physics and handling on each car.


So choose your seat carefully, and don't expect to win if you choose to drive a Coloni!

Ver 1.01
14/12/15: Adjusted performance of several cars/drivers (in particular, Nannini was too fast, Martini & Palmer were too slow, plus others).

Some graphical errors still to be fixed (for example Mclaren logo and some other trim lines need lining up properly)
Some sponsor stickers still to be added/amended.

Some teammates may still not be accurately matched yet, further adjustments may be needed.

Larrousse and EuroBrun teams not yet included
Reactions: tjc, yusupov, Roderick Kennedy and 2 others

As for all your mods, this one really helps improves the whole GSC experience. Thanks for your work!
Upvote 0
Excellent mod. Thanks
Upvote 0
Great, thx for the skins and perfomances of 1988! It’s so nice to race these cars with proper textures, real names and driver skills. One thing I experienced in 2-3 races so far: Alboreto is quite strong, often qualifies 3rd place (behind the Maccas) and is better than Berger. Don’t know if that was the case in 88? Anyway…really appreciate this mod!

morsify
Thanks for the feedback & I'm glad you're enjoying it. Overall I think Berger should be stronger than Alboreto. There seems to be a random element programmed into the code (which is a good think I think) so it cannot be completely controlled, but I will definitely take a look at those numbers for the next update. there is always room for some adjustment.
Upvote 0
Read more…