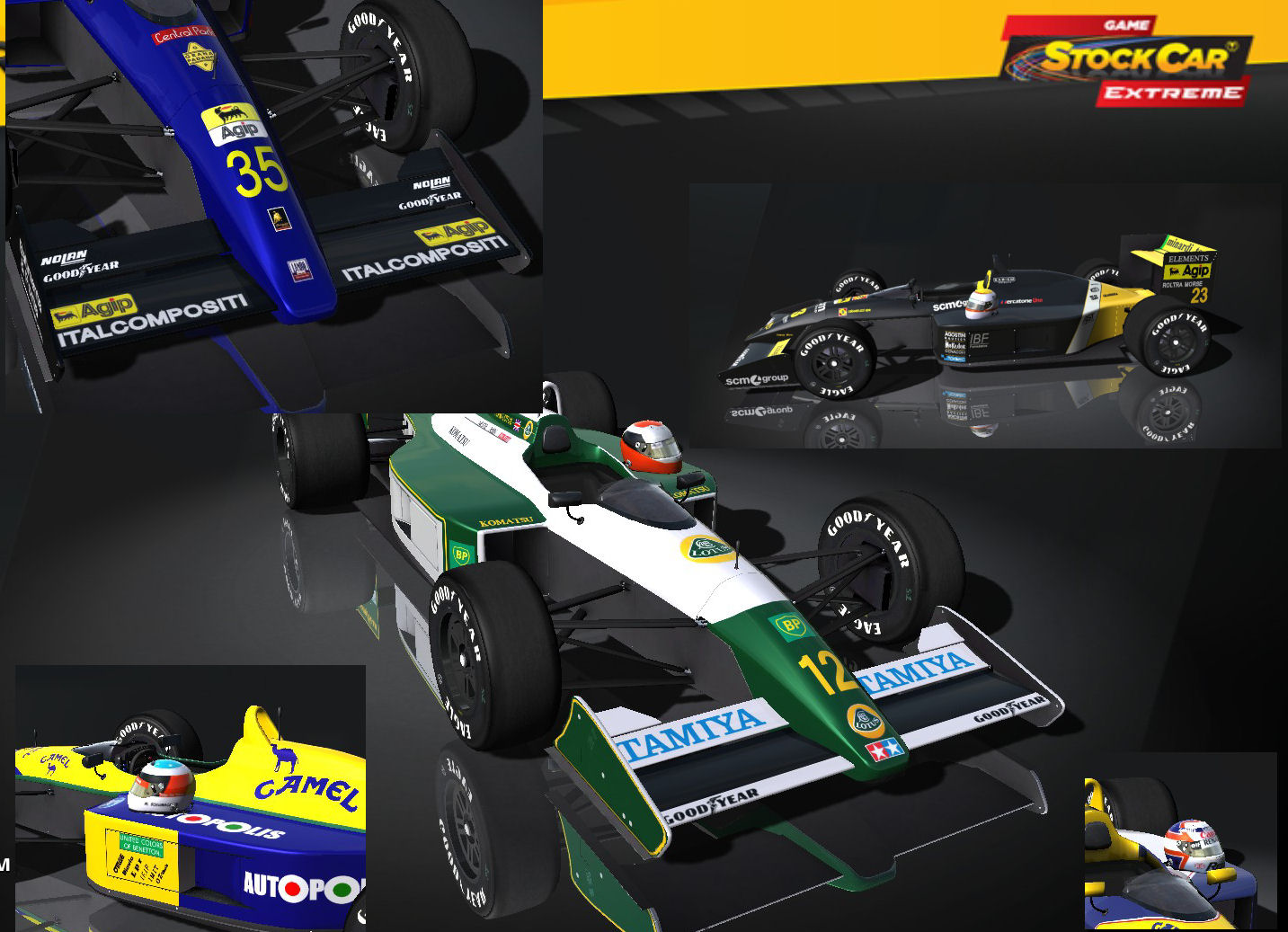 In this readme file:
1) Credits
2) changelogs
3) Information
4) How to install
5) About the Offline skinset
6) Previous changes (from SCE)
7) known issues

1) CREDITS:
As always, a big thank you to Reiza for the original templates & files used to paint these skins & create the updates.
All original work remains the copyright of Reiza, and files are used with their kind permission.

3.05
Updated upgrade files for compatibility with latest Reiza changes.
Balanced AI variations, so teammate should be a better match with the human player.
Fixed some graphical errors.

Single Player version: By default, 26 cars will appear in your game, from a total of 34 available in the mod. Set includes performance & reliability variations.

Multiplayer version: this set includes 34 car liveries, but all car physics are equal.

Several teams had to pre-qualify in 1991 and will not appear in the offline version by default.
IMPORTANT:
If you want any of these drivers to appear in your game, just open the relevant driver .veh file using notepad and remove the word VOID from the end of the hdv line.

Save the file again as 91blundell8.veh and the car will then appear in game.

There are two sets to choose from -
a) single player version - use these offline if you want the best, 'realistic' performance variation between the cars. In this set, the Williams/Mclarens will usually be out front, and the Coloni or Modena will be near the back of the grid. You will be unlikely to score points in a Ligier, but your challenge is against your team mate and other backmarkers, and you will also need to watch your mirrors & drive your own race without getting in the way of Senna/Prost etc when they lap you;
and if you choose a front running car such as McLaren or Ferrari, then you should expect to be winning or getting in the points, so your challenge will vary depending on the car you drive.

b) multiplayer version - all car physics are default, so cars will be identical - use these for online leagues, or offline if you want close racing with default car behaviour (race order may not be as close to 1991 though, as AI lap times will be closer without the addition of power/aero variations).

I recommend a mod manager such as Jonesoft Genric Mod Enabler - it will install or remove this mod automatically for you and the files provided here are already in the correct structure.

The performance of each team has been varied slightly. This means that, as in the 1991 season, the McLaren and Williams will have a bit more power, be capable of braking later into the turns, & be aerodynamically more efficient, while cars further down the grid will be less capable in these areas. Of course I know the real cars had far more differences than this, but this is the most predicatable and consistent way to create the necessary variation, while still retaining the original physics and handling on each car.


So choose your seat carefully, and don't expect to win if you choose to drive a Minardi!

I've overhauled each of the paint skins. They now look tidier, and they more accurately resemble the real world cars.


iii) Mechanical Failures:
In the 1991 season, it was common for less than half the field to actually finish the race, and only 6 or so cars to be on the lead lap at the end of the race.

To help simulate this, the mod now includes a reliability factor - There is a chance of mechanical failure which varies between cars/teams. You are more likely to see the full effect of this if you run full length F1 races, but you will still see an increase in the number of cars retiring in any session. As well as being an attempt to add to the 'realism', I think it also adds some excitement to the session, seeing a car pull to the side of the track with engine smoking or on fire, or driving into the pits and retiring with a gearbox failure.

And if you are racing for one of the slower teams it can also help you make it into the points if a few of the faster cars have to retire towards the end.

[of course if you prefer not to use this or any of these power & reliability changes, you can instead use the multiplayer 'Lite' version included in this mod, which consists of only the car liveries, helmets & driver talent files, and uses the default game physics).

I've done a rework of the driver talent files and performance variations of each team, and found some big improvements.

In the previous version, there were still a number of issues: fast cars were barging into the slower cars when they caught up with them; there was too big a gap between the top 4 teams and the midfield; and too big a time difference between the front and back of the grid.
Changes in this version have made big improvements to the behaviour of the AI, made the racing slightly closer for the midfield; and the time difference has been reduced through the grid. The AI difficulty is now better balanced, and there should be good racing whichever car you choose to drive.

As a further update to the digital dash upgrade, now only selected cars have the upgraded dash (McLaren, Williams, Benetton & others). The rest retain the analogue 80s dash. This is to refelct the changes that were taking place in F1 technology in the early 90s.

Overhaul of all files making them much easier to install - NO original files are overwritten, and this car set appears as a carset in the main game menu, so you can still choose the original default cars if you want.

Mod includes two skin sets:
* - - Multiplayer SkinPack: this is the 1991 car skins & drivers, plus Talent files, with all car performances being equal. This set is mainly for multiplayer use, but it can certainly be used offline too if you wish. AI behaviour will be the same as default, only the skins and names have changed.
** - - Offline Skinpack: this is the 1991 skins & drivers, plus Talent files, PLUS it includes some performance variations between teams - this is aimed at the offline player, as it provides a wider performance difference between AI.

Cars in this set have an updated Digital dash


Amendment - Ver 1.4
All skins remain the same, but the dashboards in this set have been upgraded to the electronic version. If you prefer the analogue dash (with dials) then continue using ver 1.3).


Amendment - ver 1.3
Updated for GSC2013 (These are exactly the same skins but have been painted onto new GSC2013 Templates to make the colours reproduce correctly).


Amendment - Ver 1.2:
Improved the Talent files, the crash figures were incorrect, the AI should behave slightly better & less prone to spin/crash into each other with these new files.

Amazing
Awesome!!!
Beautiful skins. Thank you so much.
GREAT update, thanks you so much.
looking forward for the F1 88 update !
Great work and thank you for sharing.
Will you update the other season skins of the F1 cars?

morsify
Yes, will do, sorry haven't had time recently but will definitely do the 1988 cars soon
McLaren sound and Williams Renault sound were confused. Please switch them.
Fantastic, Thanks so much
Many thanks. Love your work.
Excellent skins. Thank you for sharing.
thx :)
A huge amount of work has gone into this skin pack and I want you to know it is fully appreciated ...having a talent file that does NOT overwrite previous (or default) files is a HUGE plus for me..I know this alone would have given you many hours of work. Again many thanks love it.
Great mod, i do my Performance on my Mods the Same way :D

This you have to put un your Upgrade folder of each Car.

As Higher the BodyDragBase like (0.999) as less Grip in Corners and the Accerlation of the Car is becoming really bad.

UpgradeType="Grip"
{
UpgradeLevel="Grip"
{
Description="Grip"
HDV=[BODYAERO]
HDV=BodyDragBase=(0.2950)
}
}
Thank you a LOT!!! Not only for the skins, but also for the work you put into adjusting the cars' performance and reliability; top notch!
Makes for one of the best simracing experiences in any sim. Thanks for all your hours of tweaking, fettling, and polishing this into a superb recreation of a classic era of motor racing.

morsify
Many thanks for the comment - it seems to be working pretty well so far, especially the improved overtaking, but as with the 88 mod, if you notice any driver that is regularly too far out, I'm always happy to try and improve the numbers.
Hi, thanks a lot for your outstanding job!!! Now, could i ask you for a little help? What files should i modify if i want to change the performance of the teams? i want to try this in another mod i am fixing here. I want to make one team perform faster than the others. Or simply modify the order the cars start at the starting grid.

morsify
Sorry I meant to reply to you earlier - just look in the upgrades file in each team folder, and you can see the changes I made. Bit too much to explain here, but you could use the same upgrade files and change the name of the upgrade file in your veh files to match.
Fantastic work. Have you ever thought about a Formula V12 pack?
Awesome!
Thank you! Will you convert the 1988 mod for AMS too?