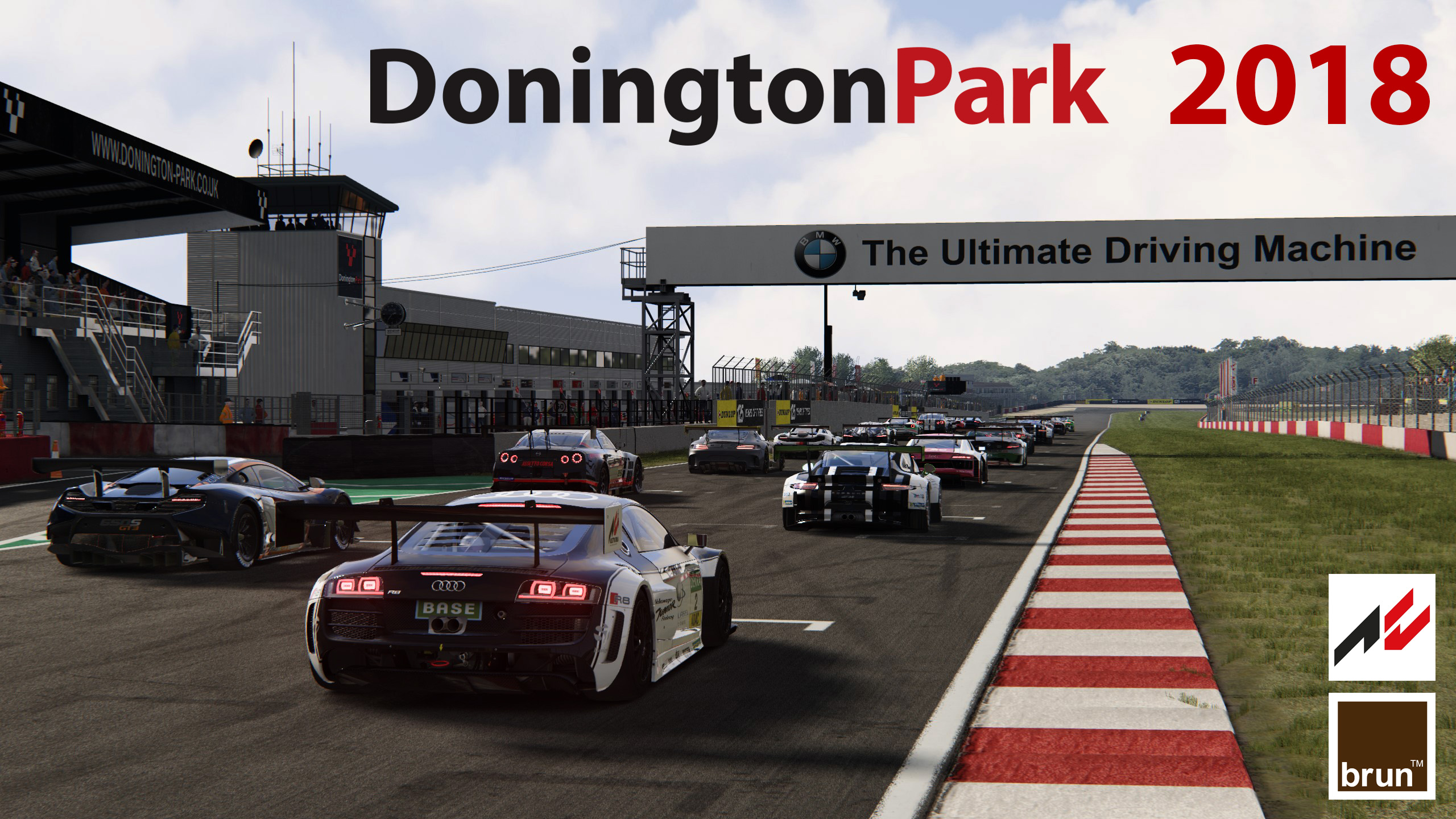 I've definitely not spent 2 1/2 years on this for the money, but if anyone thinks my efforts are worth a beer they can show their appreciation with using the button below. Many thanks to anyone who's done so already.

More model and texture updates and tweaks
Re-recorded AI lines for both layouts. Should be quicker than before, particularly on GP layout.

Updated to represent Donington in 2018
Instals as a separate track so can be used without removing the 'vintage' version
Too many aesthetic improvements to list
Made penatlies more consistent with Kunos tracks. No penalties for running onto grass, but added specific 'no-cut' areas at the chicane and apexes of certain corners
KN5s are now more discrete so loading of the crowd can be disabled if desired

Fixed LOD issues with fences and other objects
Tweaked some shaders to reduce shimmering on some trackside objects
New background environment outside track, including proper models for airport tower and power station
Above should hopefully mean no more weird looking backgrounds with certain weather/lighting conditions
Included much improved AI file for GP layout, many thanks to Stepy over on the Kunos forums
Recorded new AI file for National circuit which probably isn't as good as the above

No physics changes, driving should be as 1.13

Toned down bumps based on feedback from 1.12

Completely retextured track. Hopefully looks better, and should have also lowered VRAM use (as well as download and install size).
Improved some track-side textures

Consolidated GP and National circuits into one track.
Corrected surfaces for runoff areas so penalties are applied correctly.
Corrected vertex normal maps for improved shading of mid-ground and horizon.
reorientated pit boxes to be parallel to pitlane again. AI seems to cope ok despite cars being very close together.
Did a spot of gardening.

Finally(!) fixed the collision bugs that had been plaguing this track. Despite spending hours (like a whole weekend, and then some) remodelling the physics meshes it turned out to be a simple bug with conflicting names in the surfaces.ini.

Extensive remodelling of physics meshes, where are now completely independent of graphics models. I'm almost 100% confident that there are no holes, intersecting geometry, overlapping polygons or any other artefacts.
Made all crowds 'KSLAYER5' which means they won't be rendered if world detail is less than maximum.
Fixed shimmering windows of the building at Goddards, which was very evident at the start of replays.
Added reflection to glass surfaces and transparency where necessary.
Made sure shadows were disabled for all surfaces which didn't require them.

Too many graphical improvements to list
Lots of optimisations. Despite the increase in quality performance should be at least equal to, if not better than previous versions.
Much more detailed modelling of the runoffs and apexes at Redgate, Old Hairpin, McLeans and Coppice. Extra care needs to be taken to not exceed the kerbs or there is a risk of damage.
Modified the AI line so they don't use the pit exit to get a better line for Redgate.
Probably other stuff I've forgotten about.

Absolutely huge thanks to Zytok from the Race Department forums for providing fantastic reference for the kerbs and other details around the track. Many of the enhancements in this version wouldn't have been possible without the photos very kindly shared.

Great rendition of this track.
Upvote 0 Downvote
Very good. The drive is enjoyable, the AI is fast enough and the track looks good! The physical mesh is good and comes close to the feel in the laserscanned ACC version.