I noticed quite a few people are still using this tool in DiRT Rally 2. Though there are more comprehensive solutions out there it seems some still prefer the simplicity of this app for use specifically with the DiRT Rally games. So I thought I would make some small updates to the app and upload it in the DiRT Rally 2.0 section as well as the original DiRT Rally one. The update includes borderless and always-on-top functionality, which previously required external apps, as well as the ability to add a recent trace to the G-Ball, for those who want it to look like a child scribbled on it, or like to track its recent movement.

If playing DiRT Rally 2.0 Please ensure extradata = 3 is set in the hardwareconfig.xml file. This wasn't necessary prior to Update 1.5. But the scaling suspension sliders and more accurate rev counter wont work without it. Cheers.

DiRT Telemetry Tool is an app for the DiRT Rally games which displays information about driver inputs as well as the state of the car while it is driven in game. This information includes:

Setup Instructions are included in the accompanying readme.rtf file.


I’ve now added these features to the app so there should be no need to use external programs to remove the window borders or force the app to stay on top of the game window. These options can be found in the settings application. When borderless the app can be re-positioned by dragging with the mouse. 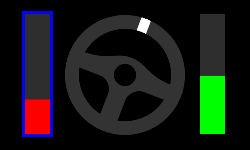 
The settings app (settings.exe) can be found in the app directory. To change settings, run the app while the main telemetry app is not running, change which settings you want and then click apply. Restart the main app and changes should be reflected.

Many features of the app can be enabled / disabled using the settings app, many of these are enabled by default. The options include:

Selection of 3 different display modes (Full / Compact / Wheel) depending on usage. Wheel mode, for instance, displays only driver inputs and can be useful for streamers.

Colours for individual controls can be enabled / disabled.

G Ball can be set to flash orange or red during high forces.

Gear indicator can be coloured based on direction of gear change, Green for up, Red for down or Neutral, to aid peripheral awareness of shifts.

Coloured background can be enabled to allow streamers to use chroma keying to remove background.

Max RPM of rev counter can be changed to accommodate high revs of certain cars.


Although it's been rewritten, this app was based on nascent code by Zeb which he was no longer working on. Thanks to him.

Hope you find it useful.

Please note that the tool only displays UDP data sent by the game which takes certain things out of my hands, such as the auto clutch displaying and the accelerator appearing to lift during shifts. When the UDP stream is interrupted the tool will remain in the state it was in when the last data was received until it starts receiving data again.

If the tool stops working following updates to the game or Steam integrity checks please first check that the hardware_settings_config.xml file has not been reset, it may need to be changed again as per the instructions in the readme file.

Using tool over network: I'm opening myself up to a lot of troubleshooting here but if you want to use the app on a separate device on the same network you can. Preferably not using wireless though as it may not be very smooth. To do so set the IP in the hardware_settings_config.xml to the local IP address of the device, this will generally begin 192.168.1. Then change the IP in the data\connection.cfg on the target device to the same number and allow it through any firewall that you use.

Here's a video Meszes made way back when I published the first version: