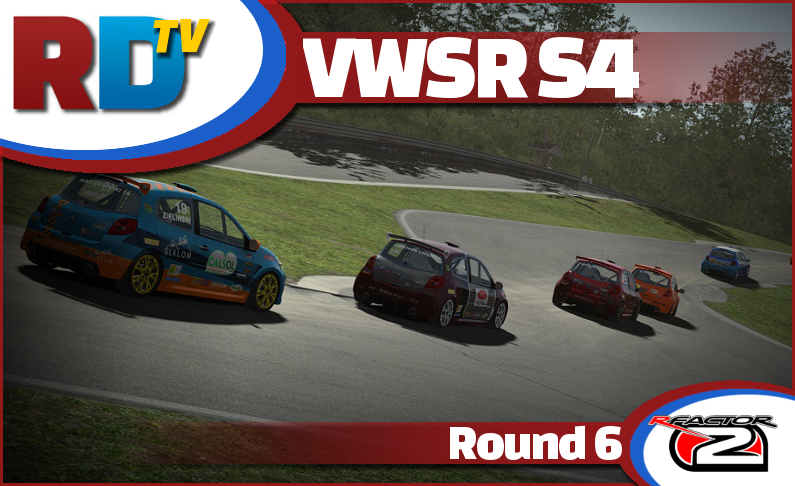 10 races later we finally reach the end of the Clio Cup! Round 6 of the Virtual World Series by Renault will bring us the last two races from the Circuit Gilles Villeneuve, in Montréal, Canada, to conclude what has thus far been a fabulous competition. The event will be on Friday 29th May 2015, and as always there will be a live web stream for viewers across the world.

Season 4 has been a blast! The quality of the driving throughout the field has been near impeccable and incredibly entertaining. There simply hasn't been a dull moment in a single one of the past 5 rounds, and so we wait for the climactic end for which we are all hoping. Only two races remain for the drivers; who will be able to improve their championship position, and where will the coveted trophy go? There's not long before we find out!

So Close, Yet So Far!
To say that the last race, at Magny-Cours, was the scrappiest we've seen so far is an indicator of how good the driving has been this season. It has still seen its fair share of incidents, but on the whole it has been nothing short of gentlemanly.

However, unlike previous rounds luck eluded MC Racing in France. Christian Michel put himself on pole position for the first race, which came as no surprise, but in the race itself he was under threat from the off by independent driver Pedro Gomes, who took the lead half way through by giving Christian the squeeze. Pedro went on to take the chequered flag in first place, followed by Free Racing's Teddy Buch. Christian still managed to make the podium owing to the gap that the front runners built up during the opening laps. Unfortunately in race two the luck ran out for all of these drivers; both Pedro and Teddy got caught up in incidents that forced them to retire, whilst Christian found himself in the middle of a battle between his team mate, Simon Christmann (5th & DNF), and fellow German Frederic Schornstein (7th & DNF), which caused him to lose time and drop down the order to manage only a 6th place finish. This all allowed Christian to extend his lead at the top of the Driver's Championship to 44 points from Frederic, with only a possible 45 points still up for grabs. It's still a two horse race, but only just - Frederic has a tough job ahead of him, and is relying on a bit of good fortune, whilst Christian only requires a pole position to guarantee himself the title for a second season!

Meanwhile, James Maskell also put in a strong performance at Magny-Cours, managing 6th and 3rd after battling hard with the likes of Frederic, Andreas Oehrlich (9th & 4th), and Conrad Venter (10th & 5th). It was also a decent evening for Phil Shillitoe (13th & 7th).

However, there were a couple of drivers missing from the line-up: Yuri Kasdorp experienced technical issues (and is likely to miss the final round for similar reasons), and team mate Rui Martins was unable to attend, as was Jimi Hughes, whilst Sky Willis tended to an arm injury. And to add insult to injury, Sky's team mate April Dillion also had a torrid time last week, as she set no qualifying time thus forcing her to start from last, and was able to manage only 16th in the first race, before improving in the second race for a 8th place finish.

Joao Fernandes managed 10th in the second race after a DNF in the first, which still leaves him top of the Independent Driver's Championship with 77 points, 8 points ahead of Phil Shillitoe, and 13 points ahead of Tapio Rinneaho who took 8th in race one but went on to win race two after the other potentials failed to seize the opportunity. Conrad Venter is only a point shy of equalling Tapio's current total, whilst Pedro Gomes and Manuel Caratozzolo (11th & 16th) are on 56 and 49 points, respectively. Finally, new driver Niranjan Kumar put on an impressive show, with a 4th place finish in race one and almost a repeat performance in race two were it not for the technical issues that destroyed his chances in the final moments.

For more information you can see the full results and standings for Round 5.

Watch the VWSR live stream on Friday!
We will be bringing you full, live coverage of both races, with commentary courtesy of Xavier de Carvalho and James Sadler, from 6:30pm GMT onwards.

*The prize is transferable to another member, or can be claimed at a later date.
Last edited: May 29, 2015
Reactions: James Sadler, Gijs van Elderen, Simon Christmann and 7 others

That DNF was a real bummer at least I am theoretically in the fight, but I will miss the race, so my hope is to keep P3 in the standings, which is a lot more difficult with that DNF instead of a podium
I am looking forward to watch the races when they are over.
Reactions: Phil Shillitoe
You must log in or register to reply here.
Share:
Facebook Twitter Reddit Pinterest Tumblr WhatsApp telegram Email Link
18 comments
rF2 | Free Bentley Continental GT3 Release + Substantial BOP Update
46 comments
Sim Coaching Discount | Driver61 Sim Pure Pace Masterclass
37 comments
This Is Cool... New V10 R-League Esport Series
24 comments
RaceRoom | DTM 2020 Talk 'n' Drive