I've been working on getting the old Swiss Stroll compatible for v0.8.11 (which hopefully will be out this afternoon, might work on v0.8.10 except for perhaps the waving banner shader). 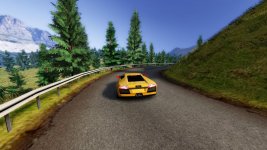 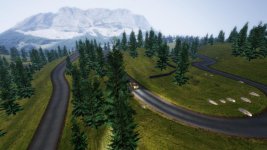 Nice work, will have to take a look later.

Just my 2p from the screenies (mainly 2nd one), it looks nice, but the atmosphere is really pumping up that large mountain in the background to be quite bright vs what is in the foreground.
Assuming the levels/intensities of the textures are ok (give or take), then isn't it usually the case that things become darker and more foggy as they move into the distance, not become brighter?

Also, the trees don't seem to be casting shadows in the 2nd pic either... hmmm


I'm sure it's mere details anyway, so thanks for doing the hard work and getting it going


Winter Stroll will look fantastic with the snow turned on

The 2nd pic was made earlier, before the latest tweaks of today. The 1st pic is from today.
The mountain is fading into the atmosphere, which was a bit too bright perhaps in the 2nd pic.
It was good to do a regular internet track to see what came up. I took out the original shadow.dof which casted all the prefab shadows. I intended to do a tutorial on it but as I didn't know what to expect at the beginning, that was a bit hard. Lots has changed but it was mostly track.shd stuff. I also optimized a bunch of the dof files to get rid of a number of 'material_xxx' warnings. Still not entirely ok but well.

If somebody else can do Winter Stroll.

The link tells me I'll be redirected but doesn't redirect me!

What am I doing wrong?

Lol.. I'm not sure. The open/save popup should appear, it doesn't actually redirect you to a page.

This is a really great track, but I only get 30FPS >.< Ah well, new graphics card will come eventually

Btw, how about this for a new default track?

Good job Ruud, just too many Qlog errors. I couldn't find the alpinehorn or hear it along with a couple of other sounds.

I had to login before I could download the file, dumb me!

KS95, No it should not be the default track, carlswood needs redoing so that ALL racer features (surfaces, sounds, etc.) are available!

And a decent sky!
R

I've updated Swiss Stroll to get rid of all shader errors. Haven't looked into the audio yet, and the grass needs some tree-like shader to look better, plus I need to add some shadow_cast=0 option in shaders to prevent grass from casting a shadow (when shadowmapping).

Thanks Ruud, I'll check it out later, I was just about to fix the Qlog errors.

Good job Ruud, Thank you from the Qlog nazi!
O

I`ve tried many versions of racer to get Swiss stroll started, but there`s always the message "Shader ERROR". Is this a hardware or a software problem? What can i do?
A

What computer you have?
O

Dream Factory said:
may be thats the problem....
Click to expand...

Are you kidding me?I suspected that it could have a old video card,but is not this.

O.K. Thanx. So i´ve to drive all the other great tracks - they are working without problems.
Apropos other tracks. Where can i get the newest tracks, which are the best ones?

Another question: I like Swiss stroll Snow very much. But is there a possibility to add snowflakes? That would be great! And i also saw some evening/ night tracks where cars have turned its headlights on? How does this act?

Thanx again for your answers!

huh. i hate that statement. it is fascism. Use nVidia or die.

luthobu said:
huh. i hate that statement. it is fascism. Use nVidia or die.
Click to expand...

Nope, it's the truth. Either that or a lot of people, including ATI themselves, are lying for no paticular reason. Stereo has shown an example.

Heh. Yeah. Just got carried away for a sec. Sorry.

Hehe, no problem, I think it's clear you aren't the only one.. *whistles*
You must log in or register to reply here.
Share:
Facebook Twitter Reddit Pinterest Tumblr WhatsApp telegram Email Link
84
Opinion | Racing In The Rain
0
The Future of Product Promotion on RaceDepartment Forums
11
F1 | First Images From Vietnam GP Pitlane Revealed
53
DTM | R-Motorsport Aston Martin Withdraw From Series