Lewis Hamilton and Valentino Rossi are set to sample each others office for the day this December, with both racing legends taking to the track at Valencia on December 9th.

Should Hamilton secure the 2019 Formula One World Championship this season, Yamaha MotoGP rider Rossi and Mercedes driver Hamilton will have no less than 15 World Championships between them - making this intriguing driver switch one of the highest profile of its kind in recent memory.

Hamilton is no stranger to two wheel action, often hitting the track during private test sessions and even having spent time with a Superbike Yamaha and factory riders Alex Lowes and Michael van de Mark back in Jerez late last year. 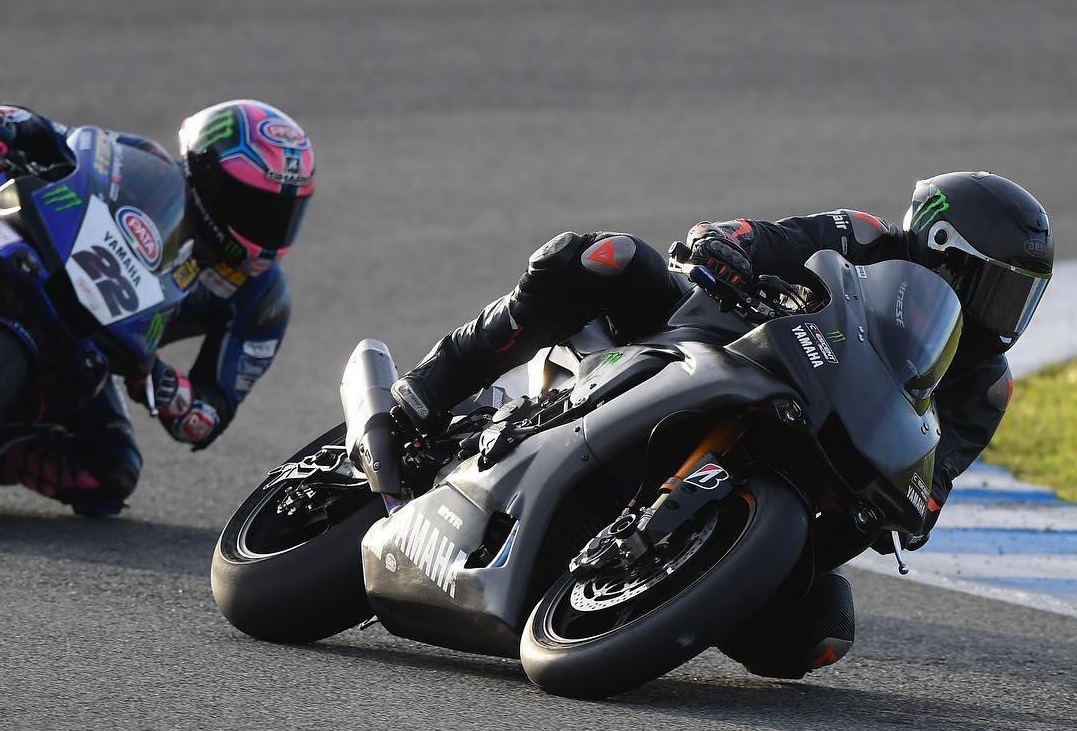 On the other side of the garage, MotoGP superstar Valentino Rossi has considerable experience with Formula One machinery. The now 40-year-old Italian has driven numerous sessions with the Ferrari Formula One team during his MotoGP heyday, even going so far as to make a serious assessment of the possibility of moving into Formula One racing full-time back in the mid 2000's.

The driver swap scheduled for this December has come about due to the close links both racers share with sponsor Monster Energy, and has been in the works for a number of years as the energy drink manufacturer look to bring two of the biggest stars in motorsport together on the same circuit in each others machine. 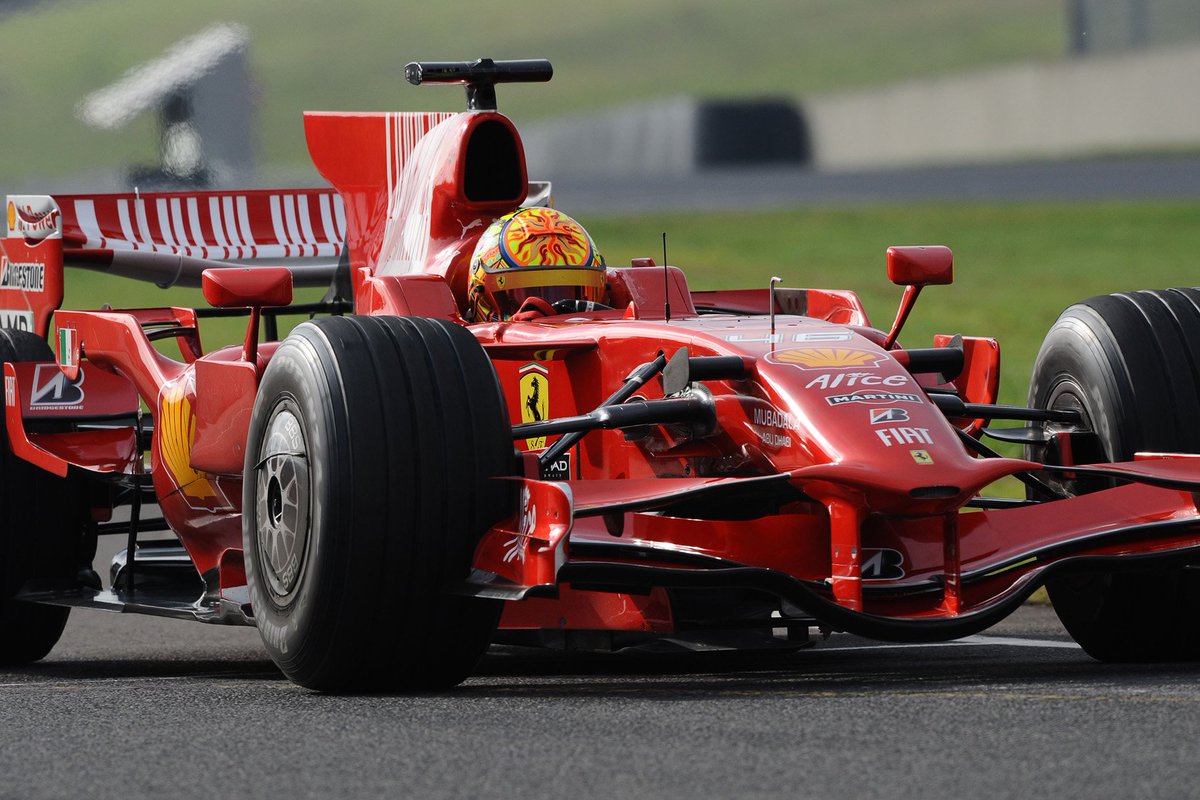 The test will mark a first time on current MotoGP machinery for Hamilton, and although both racers will no doubt be keen to take the track action seriously, is is understood that this event is purely for fun, and does not have any intention of assessing either pilot for a potential switch of discipline in the near future.

For the record, Rossi has attended multiple car and rally events in recent years, the next of which will be a drive in the Ferrari 488 GT3 at the Gulf 12 Hours at the Yas Marina circuit in Abu Dhabi directly following the machinery swap with Hamilton on December 9th.


For more from the world of national and international motorsports, head over to the RaceDepartment Motorsport sub forum and catch the latest news and chat.

I really like the picture. Chopping Hamilton's head off and all

In fact there's no proof this is Hamilton at all. I think Paul Jeffrey is making up the whole story.
Caption should read:
"Valentino Rossi Completes his degree in Plumbing. Is congratulated by his instructor."

In other news, Bottas loses his seat to Italian MotoGP rider in unprecedented Mercedes test day.

I can't be the only one interested to see just what Hamilton could accomplish on a MotoGP machine... right?

The way the header picture is displayed could really be improved @Paul Jeffrey, I mean in general.

I'd love to see Rossi more regularly driving race cars after his retirement from MotoGP , he competing at Le Mans would be great for example.

At this point Bottas could be replaced by a mop with a bucket perched on it for a head and I think it would take 3-4 races for anyone to notice.

Go Rossi for Formula One

He should have years ago. Now I fear he is too old for a switch.

Luke Cage said:
I can't be the only one interested to see just what Hamilton could accomplish on a MotoGP machine... right?
Click to expand...

I've been following MotoGP for years. The bravery, strength, and bloody balls it takes to tame one of those 300hp beasts is beyond the requirements of a modern F1 driver.

Riding a MotoGP bike at its limit is COMPLETELY different than an F1 car. These bikes will buck you off, break your bones, or even kill you. Meanwhile, Hamilton won his championships while wrapped in a carbon fiber cocoon, now equipped with a halo. On Letterman's "My Next Guest..." with Hami, he admitted the cockpit is so comfortable that he can fall asleep in qualifying while waiting to hit the track. Good luck falling asleep on a MotoGP bike...

What about mental fortitude? We've all heard those radio comms between Hami and the pitwall, him doubting the teams strategy, complaining about this thing or that whatever. In MotoGP, there are no radio comms. When your team leaves the grid for the formation lap, that's the last you hear/see of them, besides the signs down the main straights (and now, dashboard messaging). Maybe Hamilton can survive the demons in his own head during the attrition of a MotoGP race?

Then there's riding through injury. As far as I can see, Hamilton has never been injured, or needed to drive while injured. Meanwhile, Rossi has ridden with broken shoulder bones, torn ligaments, and healing broken legs (twice). MotoGP riders are like professional bull riders, who are never 100% health, and yet you have to throw a leg over that beast and do it again after it just kicked your ass. Maybe Hamilton can do that too?

Then there's the, sometimes ruthless, on-track competition. Look at this pass by world champ Marquez on Crutchlow from this past weekend, that's savage, and there wasn't even a warning flag. Thinking about Hami's battles with teammates, imagine bodily harm resulted from those incidents with Rosberg and others. The environment is also more brutal in MotoGP... Philip Island had blustering wind all weekend, so dangerous they red flagged the session and didn't do qualifying after Oliveira was blown off the track in a 300kph braking zone. We know Hamilton thrives in wet conditions, but when breaking bones is on the line... could he still perform?

Spoiler: Who joined Marquez on the podium in these windy conditions? The two most courageous riders that thrive in tricky conditions, both of which are on CUSTOMER bikes and not factory teams (!!!!). They didn't have the fastest machines, but they pushed the limits farther than their competitors, because those riders have, you guessed it, the biggest kahunas on the grid. Does Hamilton?

So no, I'm not interested to see or reflect on what Hamilton could have done in MotoGP. Because I know he wouldn't be a 6 time world champ.

Am I the only one who was hoping it would be Alexander Rossi and not this one? Lewis in an IndyCar could be more interesting.

Why Mercedes? Was always Ferrari he would have a shot of, back stabber!

Esox71 said:
Why Mercedes? Was always Ferrari he would have a shot of, back stabber!
Click to expand...

It says why.... because of Monster.

Hamilton?
On a MotoGP bike!
What a joke.
As 'billymitchell' wrote, PI was brutal on the days leading up to race day, and the racing was epic.
I know, as I rode to the circuit on all three days on my Ducati and that was 'interesting' in the wet at legal road speeds.

Can't help but think that some of you are WILDLY underestimating Lewis' capabilities.

Luke Cage said:
Can't help but think that some of you are WILDLY underestimating Lewis' capabilities.
Click to expand...

Why don't you enlighten us?

Esox71 said:
Why don't you enlighten us?
Click to expand...

It's not about enlightening anyone... but I've seen loads of comments stating just what Billy and Wombat have said. That he'd be utterly useless on a bike.

I mean, he did some Superbike running earlier this year and those guys seemed pretty impressed by him.
As for the mental fortitude comment... that's a joke.
Hello! Basically a 6-time World Champion!
If he was mentally weak, he'd have flamed out years ago...
And as for the radio thing... I can GUARANTEE that if MotoGP riders had comms, they'd be questioning things all the time too.
And no, I wouldn't expect him to win titles in MotoGP... but maybe the odd race or two? Given the right machine?... it's a possibility.

Point is... outright righting him off is, in my mind, a bit silly.

I recall a shot of him posing with a monogrammed top of the line MV and thinking 'what a waste!' I also well remember a shot of Schumacher go A over T quite some time ago. Hamilton riding a full bore MotoGP machine in a race????????????? He simply would not be capable of riding the bike and frankly, he'd lack the intestinal fortitude as well as the gonads to do so.
And FYI, Marc Marquez is only 26 with 8 world championships to his name, while Fabio Quartararo at only 19 and this year's MotoGP 'Rookie of the Year', is capable of racing at the front with any of the current crop of riders, and regarded by Marquez as his greatest future competition.
I've been following 'Bike Racing' all my life, and remembering the 'Greats' who won multiple championships on two wheels, only one (1) made it to the top of Formula 1. 'Louise' is no John Surtees, and not even close to Mike Hailwood, Johnny Cecotto or Agostini, as well as lacking the charisma of Barry Sheene.

Luke Cage said:
It's not about enlightening anyone... but I've seen loads of comments stating just what Billy and Wombat have said. That he'd be utterly useless on a bike.

I mean, he did some Superbike running earlier this year and those guys seemed pretty impressed by him.
As for the mental fortitude comment... that's a joke.
Hello! Basically a 6-time World Champion!
If he was mentally weak, he'd have flamed out years ago...
And as for the radio thing... I can GUARANTEE that if MotoGP riders had comms, they'd be questioning things all the time too.
And no, I wouldn't expect him to win titles in MotoGP... but maybe the odd race or two? Given the right machine?... it's a possibility.

Point is... outright righting him off is, in my mind, a bit silly.
Click to expand...

Don't forge there is a significant difference between Moto GP and WSB. WSB are based on road bikes, admittedly tricked up to a massive degree. MGP is full on prototype akin to F1.

There's a massive difference between being able to ride a bike fast without crashing and riding at a pace fast enough to win a MGP race.....there is no way in hell lewis would win a race, there's no real advantage of machinery in MGP (like in F1) as Dorna have done an excellent job equalising the rules. In most races the top 15 are covered by a time gap you would get between p1-3 in F1.

Saying that Kudos to Lewis to having fun on 2 wheels....it's where the real men play!
You must log in or register to reply here.