Hello all. First post, I've been lurking for a month or so.

Finally decided to take the plunge into SIM racing. I'd like to get some feedback on configuring the PC. My computer guy is a gamer but he's not familiar with SIM racing. I gave him an idea what was need and this is what he came back with.

Any comments, good or bad, would be appreciated.

Not sure how much your wanting to spend on the GPU but there are quite a few that perform better than the 1070ti since the release of the Rx5700 and Super cards. Might pay to look at some benchmarks and prices. I suggest getting more than the 1070ti though. But price will determine that for you.

Here in Australia I can't even find the 1070ti for sale new. I think the 5700xt is very compelling and I've been nVidia since my first PC build.

1KW is pretty much standard today with GPUs getting more power hungry and you don't have to worry about extra things you need to power like HDDs, Oveclocking, SLI, etc. The only disadvantage of "bigger" PSU is more headroom.
Good choice of MB, ASUS ROG is the best.
My only suggestion is perhaps 1440p monitors, 1080p is the last century, you don't need 144hz, unless playing CS GO single screen competitively. Try to get FreeSync, Nvidia supports it now.

Normal is 550W. So I would not consider 1000W as Standard. You wont get it for free. So if price matters smaller PSU would be an Option. What really matters is a good GPU and 1070 TI seems outdated. So better use your money for getting better GPU.
K

Andrew_WOT said:
1KW is pretty much standard today with GPUs getting more power hungry and you don't have to worry about extra things you need to power like HDDs, Oveclocking, SLI, etc. The only disadvantage of "bigger" PSU is more headroom.
Click to expand...

I would also get a z390 Aorus Master from Gigabyte instead the Asus ROG XI. It has better VRMs and even little anemities like a dual bios. Only downside is that the bios is not as intuitive but that's easy to overcome.

m_mirk said:
Normal is 550W. So I would not consider 1000W as Standard. You wont get it for free. So if price matters smaller PSU would be an Option. What really matters is a good GPU and 1070 TI seems outdated. So better use your money for getting better GPU.
Click to expand...

Right, "standard" as barely make it on a stock clock.
https://www.newegg.com/tools/power-supply-calculator/ 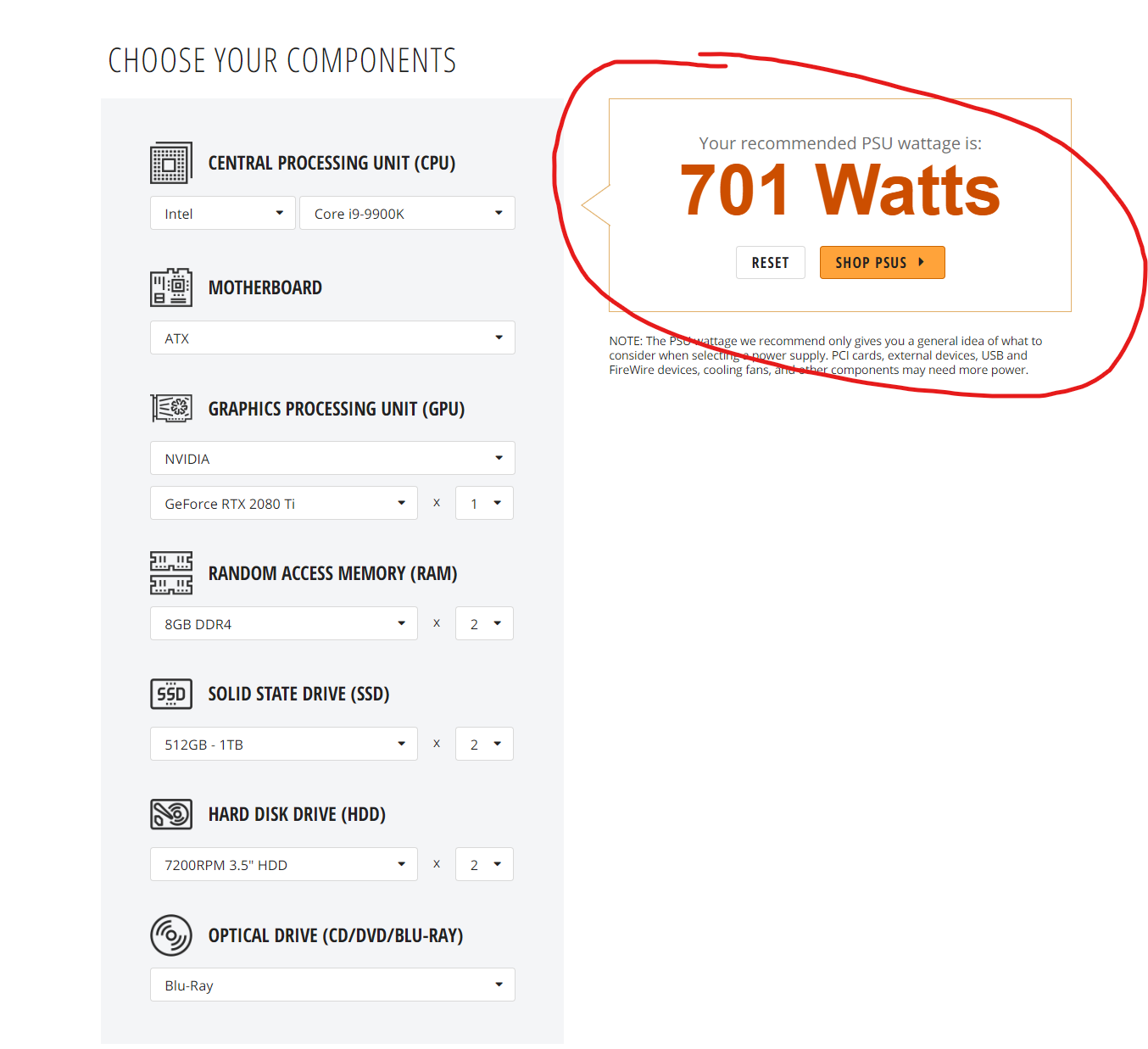 And remember, everyone is an expert on the Internet.
Last edited: Aug 16, 2019
K

Outervision has a nice calculator for that. The Newegg unit is way off. SLI is not useful anymore, with a lot of games though.
https://outervision.com/b/LLg45v

And remember, everyone is an expert on the Internet.
Click to expand...

I have an inline watt meter, so I went ahead and did a quick test.

Quick Test:
Space Pirate Trainer at 144 Hz with 180% Super sampling.
1080Ti at about 80% driving my Valve Index in VR.
Granted the CPU was not very loaded.

I'll go ahead and connect my rig later and run Dirt Rally 2.0 and iRacing in VR.
That will give me a higher CPU load and will drive the onboard audio for transducers.
The USB bus will also be much busier.

Given that the audio board is only pushing 4 channels of a 2V signal, I expect the key difference to be from the CPU and memory running harder. My guess is that it won't go past 450W, but I could be wrong.

The issue I see is that while an i9-9900K can draw more power, you would need to either be over clocking it or doing something like video rendering that distributes well across many cores.

A PS is typically most efficient at about 80% load. I've got a Seasonic Titanium 750W Hybrid PS on my development system that is extremely efficient across a very wide range. It doesn't even turn on it's fan until it reaches 350W which it never does, but it is very quiet. An over rated PS can last a bit longer since its components are not being stressed.

And remember, everyone is an expert on the Internet.
Click to expand...

That calculator adds 60 Watts for each installed 512-1 GB SSD, which is complete nonsense, an SSD will consume few Watts at most. If you remove those SSD's and the optical drive (is that still a thing?) you get down to 550 W.

These are the maximum draws while running the partial tests for 10 minutes. Power limits of the CPU and GPU are set to the maximum so they are free to take whatever they can.

Imo 650 or 750 are totally enough for any single GPU build. Better get one of the latest AMD GPUs from the saved money and get freesync monitors.

The cheaper freesync monitors (basically all mainstream 1080p, 144hz monitors) aren't really gsync-compatible so I would grab some monitors with a good image quality and a freesync range from at least 60 to 100 Hz.

I know I sound like someone who wants to convert people into my religion or something but after getting gsync I could never go back.
The issue:
With 144 Hz monitors that are not running with freesync/gsync active you would need vsync on, which gives input lag and would only get a really fluent experience if you can maintain 144 fps.

With freesync or gsync you can set an fps limiter at whatever fps your system can constantly achieve and be done and enjoy.

And neither the 9700k or a GPU at around the costs of a 1070ti will be able to constantly achieve 120 or 144 fps in all simracing titles without a lot of tweaking.

Yeah all the videos of randomly stuttering, blanking or ghosting monitors truly show that you can just use all freesync monitors with gsync compatible mode...

With PSU leave yourself some headroom for overclocking and future growth. This component outlives GPU and other parts of the system, each next gen GPU and CPU gets more and more power hungry. It's relatively cheap peace of mind with no other disadvantages except slightly higher initial price, cheaper than updating the whole PSU later. My setup is essentially the power calculation I posted, 750W and that does not include overclock of both CPU and GPU and smaller things that add up like USB power draw, audio card amp etc.

My experience with FreeSync monitor and 1080Ti has been flawless so far, and it's not even on the NVidia certified list of G-Sync compatible monitors, which OP probably at least try to stick with for guaranteed results.
Most non certified monitors work, like mine, there is a list created by NVidia redit users.

Computer power consumption has been steadily dropping for years.

When the 10XX series cards were released they used less power then the previous generation while putting out more performance.

The ONLY reason we are seeing some power consumption going up recently is that Intel has been sitting on 14nm forever and has been trying to squeeze more out of it. NVidia's latest 20 series cards ended up on 12nm.

Once Intel drops to 10nm and NVidia drops to 7nm, expect the power consumption to drop off again.

The point about PS's having long lives is very valid. The power supply that is currently in my gaming system went into the first development tower I built about 6 months after becoming self employed. It was running the just released Windows 7 and that PS ran 24x7 for about 9.5 years before I replaced it. I do believe in buying high quality power supplies. The last forever and have more stable voltages making them better for overclocking and helping your other components last longer.
Last edited: Aug 16, 2019

I'd stay away from AMD if you're running a multi-screen setup. For some reason, AMD cards consume significantly more power on idle if you have more than one screen connected compared to nVidia. It's not a huge difference, more like like 40w vs 20w, but it likely means the fans will have to be spinning all the time on AMD even on idle