A drawing has been developed, showing a planned route in the very center of Stockholm.
"I have heard of that rout and it looks fun. No one would be more happy than me if we could get two street races," said STCC owner Rickard Pålsson.

Why not use Vara as the third streettrack ?
W

The first official drawings on the S2000 Peugeot 308 of Johan Stureson and the IPS Motorsport-team have been revealed by STCC.se. Stureson is looking forward to the first test of the car, which will not be on the two test days later this week at Knutstorp and Sturup.
"We are not ready yet and we will take an extra week to complete everything. The car will be good, that I am completely sure of," said Stureson.
Currently the car is in Sweden with the team and has got the rollbar, engine, suspension, etc. mounted.

"There are some components that are completely new that needs to be build, manufactured and mounted," said Stureson.

Noticeably the car is two-door, just as the Volvo C30, something that requires special permission from the organisers as the S2000 rules requires four doors.

The car will most likely make its first apperance, with Johan Stureson behind the wheel, at Gelleråsen for the third official STCC on April the 10Th.

Today at Gelleråsen Volvo made their first public appearance with the new Volvo C30 S2000. Robert Dahlgren and Tommy Rustad made many laps with their two C30's.
"It is a really good feeling, I sit just like in a single seater in it. I think this can be really good, but we have some things to work on," said Dahlgren.
By TouringCarTimesFriday, 11 April 2008 13:51 CET Dahlgren's best time put him sixth in the time list of the first STCC-test half while Rustad only did a short shakedown lap.

The C30 carries many parts from the previous S60-model. The engine for instance is the very same 5-cylinder bio-ethanol converted one that they have used for many years.

TouringCarTimes presents a short video of the C30:

GOOD CHRIST WHAT A SOUND IS THAT!! :thumb:
C

The Volvo C30, prepared by Polestar Racing, had a difficult debute. The newly developed S2000 car had his first outing in a race, but didn't have the success the team had hoped for. With problems during qualifying and the race, the team now concentrates on improving the car to show the competition what they are capable of during the next race at Sturup in two weeks.

Tommy Rustad qualified eleventh for the race, but there were technical problems with Robert Dahlgren's car, which prevented him from participating in the qualifying session. Subsequently, he had to start from the back of the grid in today's race.

Team manager Christian Dahl explained what happened after qualifying: "We had problem with an uniball that we could not repair during the qualifying session on Dahlgren's car. It feels a bit heavy, but the car should be ready for the race."

After hard work from the engineers, the car was ready for the race. However, unfortunately Dahlgren's race only lasted one lap. Tommy Kristoffersson went off after the first corner and bounced back onto the track. Dahlgren was unable to avoid him and hit him straight on.

"The track was blocked right and left, I locked my brakes but had no chance to stop", Dahlgren said. "I was just about to select third gear. I was able to brake down to perhaps 140 km/h before I hit Kristoffersson."


Tommy Rustad's race started of quite good. He could keep up with the other cars in the top ten, but misfortune struck him, as the hoses for the pitstop gear were not put according to the rules during his pitstop. Rustad received a drive through penalty and dropped back to eleventh place. "It was a shame, I thought I had a good pace", Rustad said after the race.

"But it is hard in the early stages, we are guessing when it comes to the setup. Bad luck with the drive through, the mechanics have worked flat out with the car for the last couple of weeks, so perhaps its not that strange."

Here is the replay of the first STCC round. First it is Superbike, then Posrche Carrera Cup and then STCC Don't click on the green play button if it doesn't redirect you to the program! Click on the link under the text!

(There are also replays from last years races of STCC to the right but that is not of the entire races).

Thnx for the link Andreas :thumb:

I have been there last weekend and knutstorp is one of the most challenging tracks i have ever seen! 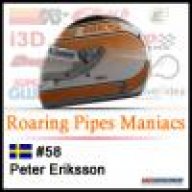 Yoeri was there as well

Ahrggg me and forums dont match

Here's the link to the second round of the STCC. This time it is from Sturup Raceway, a very tricky track, and there were a thrilling end to the race! The STCC race is at the end of the program with Pro Superbike and JTCC before it.


STCC start at Gelleråsen with many incedents ( as usual )

Anyone going in two weeks to Mantorp to watch the season's final?