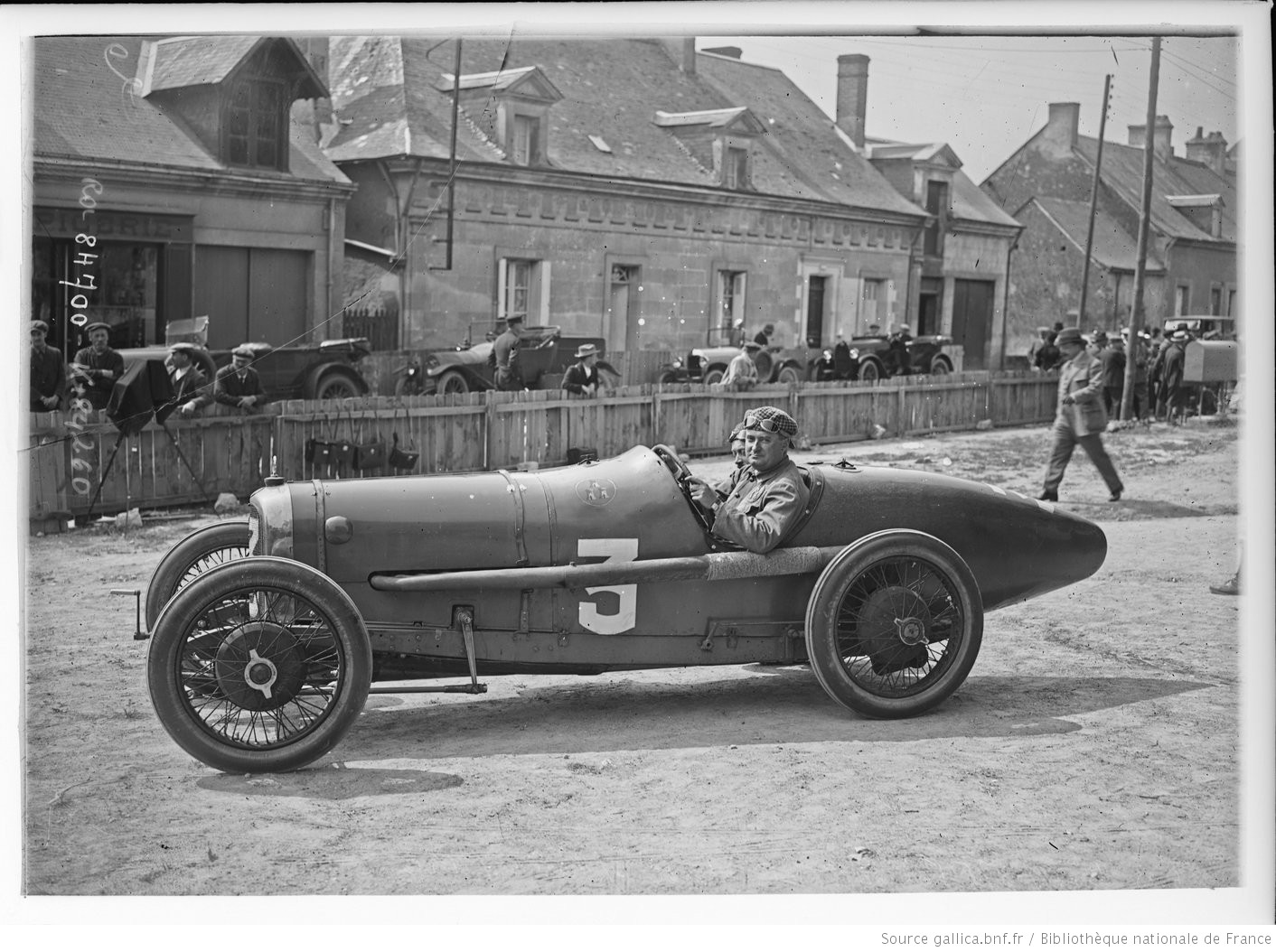 Finished! The final car of the six different marques that took part in the 1923 French Grand Prix at Tours.

Possibly a bit of an anti-climax if you believe in saving the best to last. I saved it until last because when I first started researching these cars there was almost no information available, I did wonder if I'd even be able to make it with almost no info. Fortunately, I eventually found some pictures and a little technical info (half of which contradicted the other half ) so here it is, as close as I can make it based on the info available and my far from perfect skills as a 3d modeller.

As you can see above, pre-race, the 3 car didn't have the little wings/mudguards behind the front wheels but in the picture below which seems to have been taken mid-race it has them plus a spare wheel strapped to the body. I can't tell if the 13 car was the same or not, so I've made the wings toggle-able in set-up and I might add the spare wheel in an update if it seems appropriate. 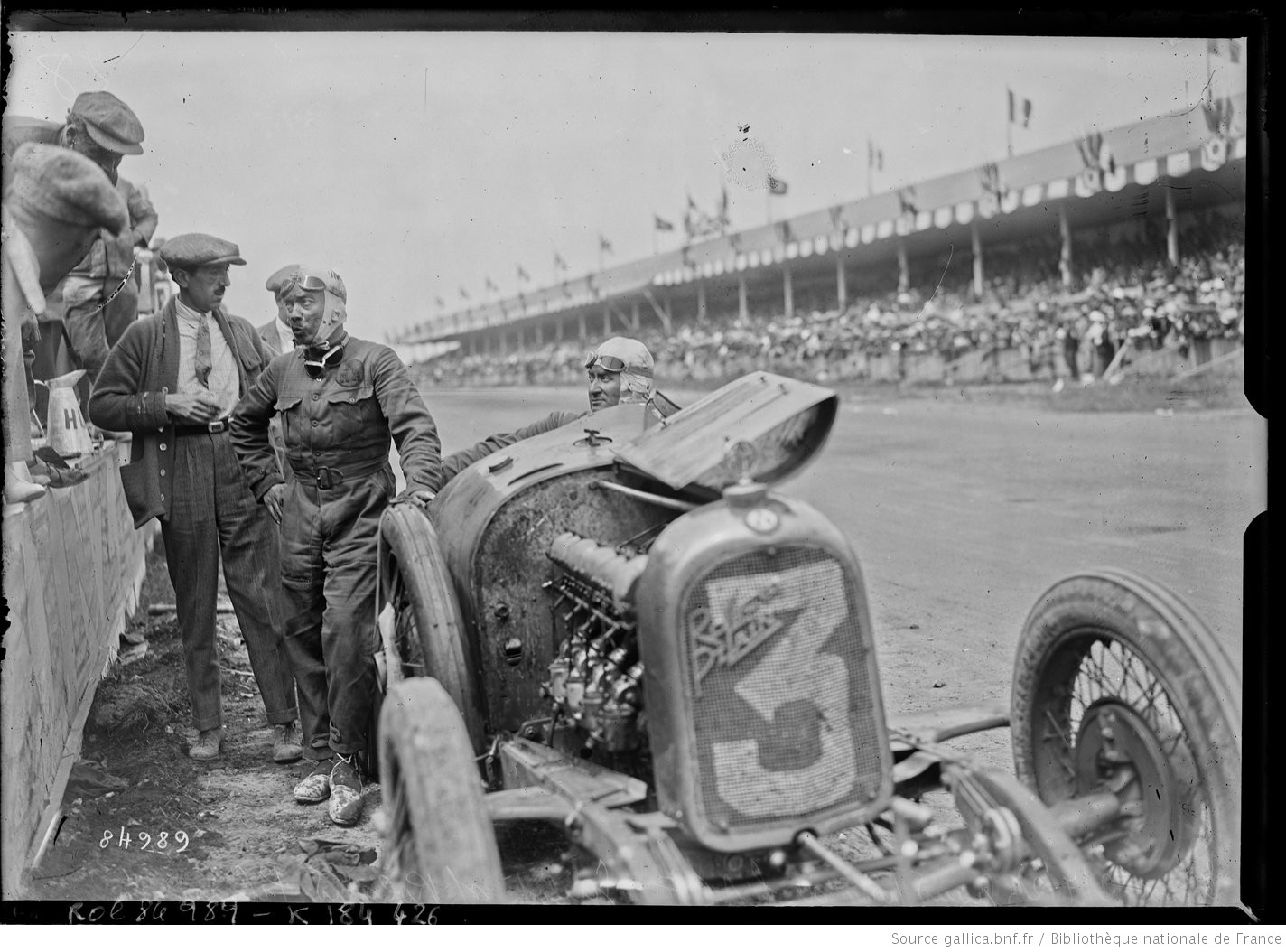 I generally try to stick to what I can see in the race pictures, but lately I've been thinking those are situational changes and shouldn't be definitive if you're trying to represent the car as it was in general. 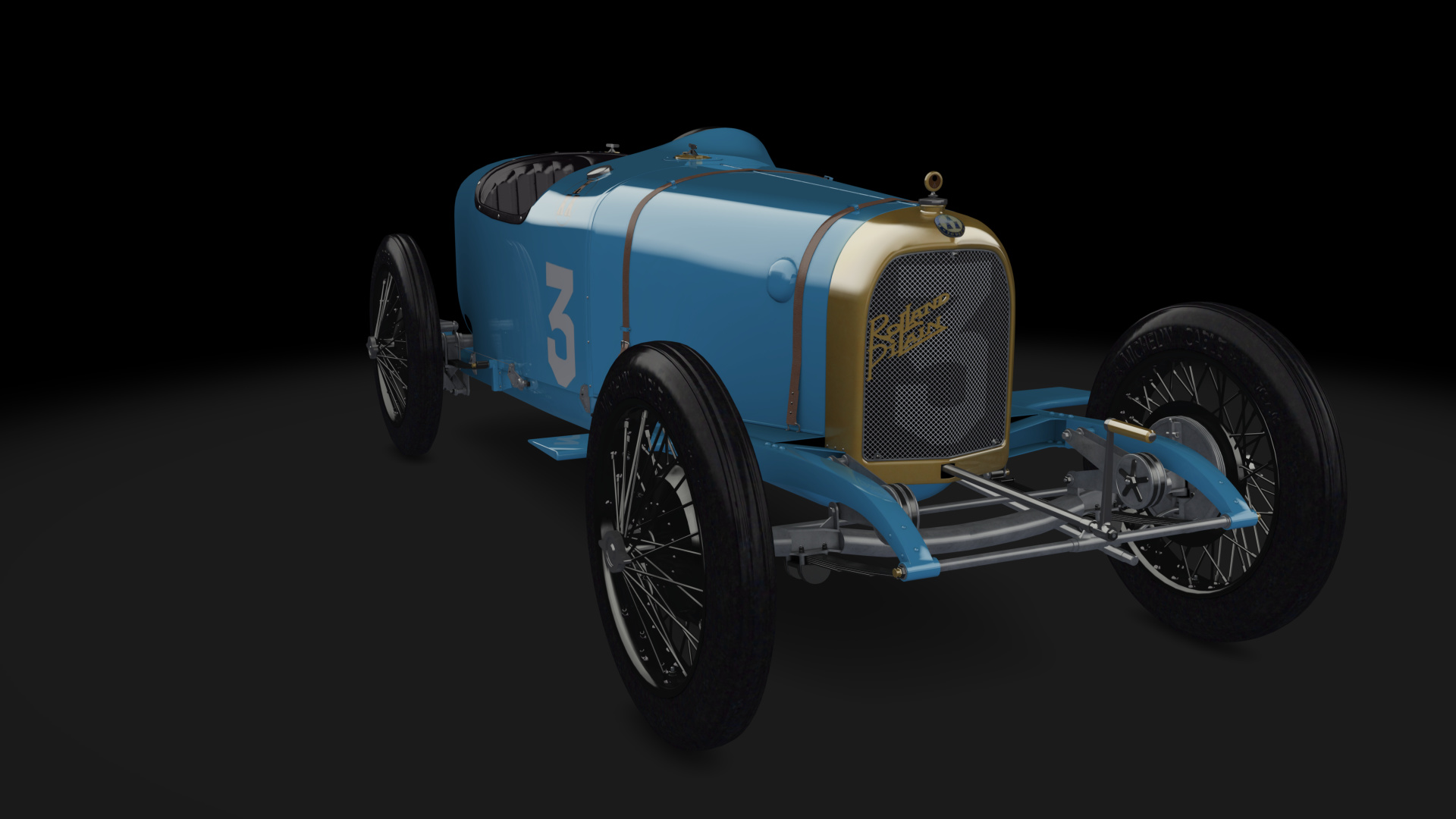 Sound is somewhere around the 'not as good as the Delage but better than the Bugatti or FIAT' range, it's still hard to find good samples and not having the original sound available as a guide and target to aim for makes it hard to know what you should end up with. If any sound modders want to have a go at making something better then feel free.

You might need the 1923 driver model, which you'll probably have if you've got any of my other cars and I've added a folder called 'vanilla_data' with a data.acd without the config lines for RainFX so if you don't use Content Manager and Shader Patch and the car crashes when you try to load it copy that file into the main car directory replacing the data.acd that's there and see if that works.

Feel free to ask in the discussion thread if you have any problems, be quite happy to help. Although, not so much if you post a one-star review without trying the discussion thread first. I don't pay much attention to ratings but that is a bit like being poked in the eye by someone before they ask you for help, so be prepared to be sworn at if you do that.

Anyway, grumbles aside, it's been incredible fun making these cars and it's been rewarding to know that people enjoy them. I wouldn't have got anywhere without AC being open to modding, without everyone who's ever answered a question about modding, without other modders inspiring me to have a go myself, so thanks to everyone involved.

Thanks also for all the nice reviews and the suggestions for improvements and things that could be better, as I always say constructive criticism is always welcome. Also thanks to the people that took the time to donate, much appreciated and went towards buying an add-on for Blender that helped me make slightly better models....I spent the rest on drugs and whores of course .

Always have a nagging feeling that I've forgotten something really obvious when I upload a mod, spent the last few days checking and rechecking but it's easy to miss something so let me know if I have.

Happy racing, I'm off to put the kettle on and have a nice cup of tea.

thank you
Upvote 0 Downvote
The car doesn't load and neither does the delage 2lcv, anything I'm doing wrong? (your other cars work awesome though)
Upvote -3 Downvote
Great job a full set, many thanks for your hard work.
Upvote 0 Downvote
As always great mod man you rock!! Your work is simply amazing!!
Upvote 0 Downvote
Thanks a lot for this classic cars
Upvote 0 Downvote
These cars are such a joy to drive! I do have on issue with them - I race in VR and when I recenter my VR view, I'm centered behind the drivers neck. Since I sit in a racerig I can't correct this by recentering while moving my head more to the back. It's weird, I've downloaded numerous cars and these are the only ones where I have this issue :-/

Nicecuppatea
It could be because, with the cockpits being so cramped, I tend to set the driver view quite far back, so the gauges are in view. I think if you go to the apps menu, on the right-hand side of the in-game screen, there's an app called 'Onboard Settings' that should allow you to adjust the view to suit and save it.
Upvote 0 Downvote
Excellent job as always! Now that the roster is complete I hope you will continue with other old beauties, like some of the first LeMans winners!
Upvote 0 Downvote
Great final addition to the field of the 1923 Grand Prix de Tours wich is now complete!
This Rolland-Pilain is brilliant and very fun to drive, I found the sound very enjoyable too!
Perhaps it seems more able to duel with the Voisin than with the fast and nimble Sunbeam? But first, I should question my own driving!
Also, the dream of a track of the GP de Tours crossed my mind, just let's hope!
Most of all, the pleasure to race with all of these fantastic cars you made for AC is now real! Thank you so much for this wonderful 1923 GP field!
Upvote 0 Downvote
Car Nice =)
Upvote 0 Downvote
looks fantastic but like the delege it crashes the game and i installed it with content manager and then manualy installed it as well but they look sooo good and i just want to drive them

Nicecuppatea
There's a folder called 'vanilla_data' in the main car folder with a different data.acd in it, try copying that into the main folder. Hopefully that works. Will update the Delage shortly with a similar extra folder.
Upvote -1 Downvote
Absolute Perfection.

10/10 FFB
10/10 Physics
10/10 3d Model (Graphics)
10/10 Fun Factor
Upvote 0 Downvote
Bravo sir, and thank you.
Upvote 0 Downvote
As always, top quality mate! I absolutely love this obscure car, tearing it up the Goodwood Hillclimb is some of the most fun hotlapping I have done in a long time, I honestly can't say if I prefer this or the Delage, but regardless they are the top of my list of favourite cars in AC. I cannot wait to see what's next!
Upvote 0 Downvote
Great work and idea but sorry, this one and Delage don't work... Any solution please ? TY

Nicecuppatea
Probably to do with Content Manager and RainFX, read the first post in the discussion thread and ask there if you have any more problems.
Upvote 0 Downvote
Your cars brought me back to Assetto Corsa; first the C6 (because I love Voisin), then the Delage whoich became my favorite, now this Rolland-Pilain (one obscure brand that no one remembers even in France!) Your work is amazing, combined with fantastic tracks like GesamtStrecke, the Targa Florio or Fonteny, this makes for an exceptional experience. I wish you would release more cars from this era (who said Beast of Turin?) and I would put 6 stars if it was possible. Thank you very much.

Nicecuppatea
Thanks (and thanks to everyone else for the reviews). Haven't done it for a while but I love taking the Voisin for a cruise around bigger tracks, High Force is another good track for just messing about and enjoying yourself. I'll definitely be making more, got a long list of cars I'd like to have a go at.
Upvote 3 Downvote
You've done it again; another brilliant car to complete the collection of 1923 French Grand Prix racers.
Upvote 1 Downvote
You know, it could be anything from this era, anything at all, but if you make it, I'll be in heaven driving it. You bring history to life.
Upvote 1 Downvote
Fantastic car and awesome job as always,thanks ! ;)
Upvote 0 Downvote
I'm ashamed to say I think I've not rated/reviewed your fantastic mods before now!
Spun this with your others around Fonteny and my word! My favourite era of Motor Car and Cycle racing just so exquisitely for the former recreated.

Now we just need a Tours track for that full GP experience!