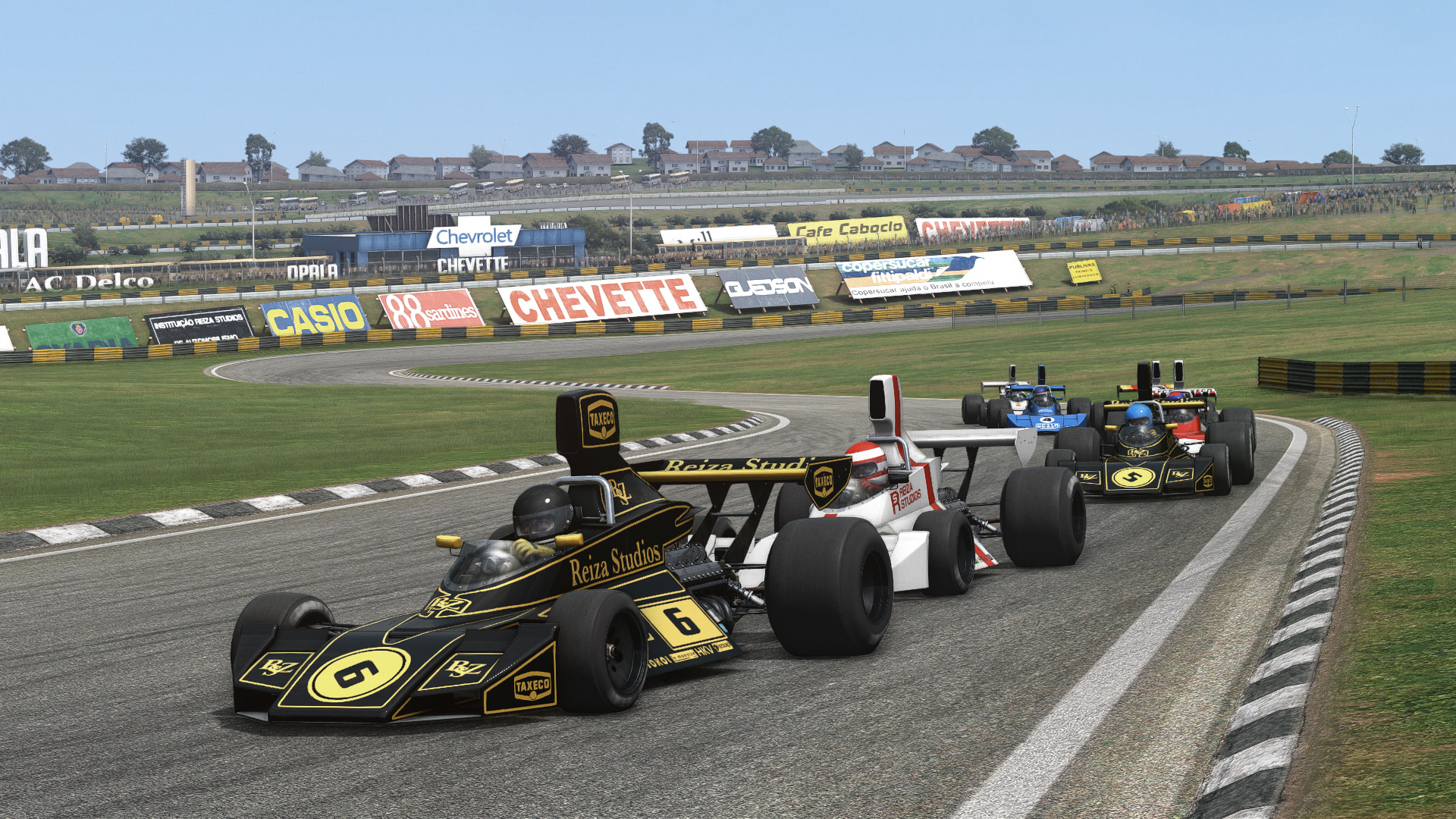 This ReShade preset for Automobilista tries to give the simulation a more natural look in terms of light, colors, depth without changing the essence of the original work of the creators from Reiza. It tries to be subtle but effective with several post shading techniques that I find to look good on the game.

Features:
How to install: 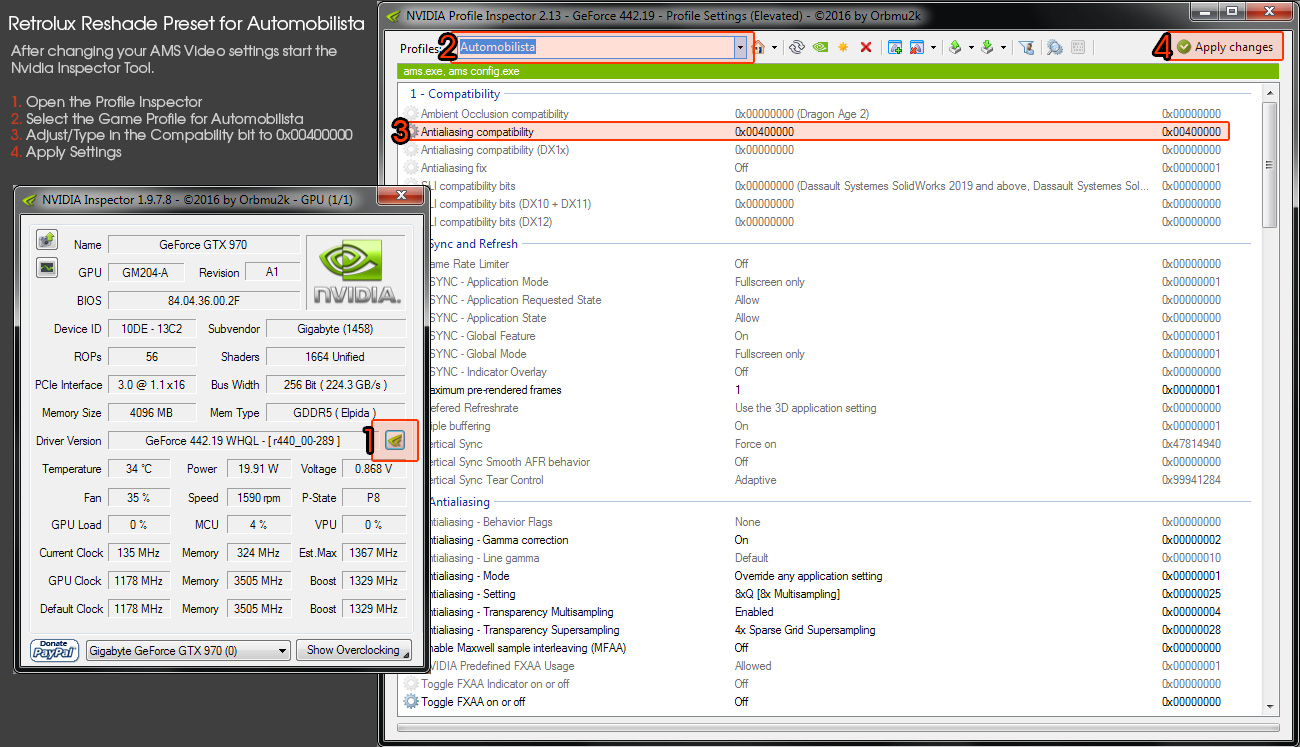 How to Uninstall:
Troubleshooting:


Why does the game look more blurred than before?
You might have forgotten to rename the dlls as told in the install instructions

I have jaggies everywhere and the antialiasing does not seem to work
You might have forgotten to set the correct "Antialiasing Compability Bit" for your windows version with the Nvidia Inspector told in the install instructions.

I have micro stuttering even when my framerate looks stable
This is often caused when the game runs in windowed mode, especially on windows 10. I recommend play in fullscreen mode and use the matching "Antialiasing Compability Bit".


1.0.0
- Updated Reshade to version 4.7.0, which will improve performance.
- Fixed AmbientLight adaptation was not working correctly

0.9.9
- Improved Ambient occulsion to be less grainy while keeping the same performance level
- Adjusted sharpening to be less pronounced and
- Adjusted Extra Anti Aliasing setting to catch more jaggies
- Enabled Extra AA Effect as Default in the preset
- Removed Eye Adaption effect to increase peformance as it is not that needed
- Update Reshade version to 4.5.4, which will improve performance.

0.9.7
- Changed Backbuffer & Depthbuffer image sampling to point sampling to fix the blur especially when SGSS is used!
- Modified old shaders(DLAA,SSDO, qUint)that where not build for Reshade 4.X to use the global BackBuffer & DepthBuffer


0.9.6
- Adjusted reshade file structure to work as a plugin with support for sweetfx and dynamic hud
- Changed sharpening filter to gain more performance with almost the same look
- Changed Post AA filter to DLAA to smooth out shimmering better in motion and it also gained performance
- Corrected shader order to avoid artefacts

Excellent, you can change some settings for more fps, or if you don't want sharpening, for instance. ***The LUT is a must-have effect***.

SSAO eats ~30% GPU power on my 2080 @3440x1440, but really makes difference (both inside the car and outside), butI think some AA setting is stuck in my system (I'm changing everything on Nvidia Inspector to find out what is the matter - at least I'm "stuck" on uberultra graphics lol, but I want to save some power).

The game is prettier than anything (except ACC) else if you like crispy graphics, this Reshade profile is highly recommended.

Retrolux
Thanks a lot for your awesome review and your experience for using this reshade package. Glad you enjoy it. I think it shows that AMS1 is visually and technically an awesome experience :). Now only a VR mod would be the icing on the cake even when AMS2 offers that :P

The shading can be quite expensive, especially on large resolutions. Therefore I have configured hotkeys to enable the peformance mode which disables a few effects for more peformance. But as you said you can easily customize it manually by enabling/disabling your desired set of shaders within the Reshade dialog.
too much trouble for nothing, for me look almost the same but the AA look worst vs the reiza settings, i try to put with diablo3 compatibility but i got a black screen, wich btw is the best AA For ams

Retrolux
I guess you did not follow the instructions? Why a bad review instead to ask for help to set it up?
Good work
it s a new game very beautiful
thank u
Great mod for AMS. It really feels more realistic than the standard filters, although it "eats" some of the FPS. But totally worth it. Congrats!

Retrolux
Thanks Limão! In peformance mode you can save some fps without loosing much of the core preset visuals. Especially while racing this is more than enough when the system is week :)
great !!! love it, looks better, i like the game for years now, and the single seaters are just good in this game. Thanks for your work !!! Easy to install.

Retrolux
Then I hope it makes your racing enjoyable. Thanks for your feedback.
Looks awesome! Thank you!

Retrolux
Thanks mate
looks very nice, Top job. Thanks for sharing. might get another year out of ams lol.

Retrolux
Hehe at least it sweetens the time until AMS2 comes out :)

Thanks for checking it out and for the review.
Very cool indeed, gives a real feel and its menu available even on track is great ! just a question... could it be made that when entering the car it goes automaticaly on and when leaving car it goes off? because the UI is not good with the reshade on.

Retrolux
Hmm on the UI it should look good as well. You might need to disable the Extra AA option in case you it is to blurred. Make sure to also set the sweetfx preset to "default" otherwise the look interferes with this mod. Disabling it in the menus automatically is not possible, you can only do this with the hotkeys.
Really good ! Looks much more natural without making bright colours too dark :)
I don't have Home and End on my MSI keyboard (It's Fn+PageUp or Fn+PageDown), so I can't use all your shortcuts. How can I modify them ?

Retrolux
Great that you like it. Avoiding any clipping was important for me as well.

Changing the hotkeys is possible through the reshade menu or the ini files that come with it. But i would not recommend it since it would get overwritten again when you update this mod to a new version. So i might hotkeys that are better to use in a later version. Feel free to post your suggestion in the discussion of this mod.
Maravilhoso