Here's a screenshot in race, if a car behind you is lapping you their name would appear in red (and dark red once it passed you), if you're lapping a car in front their name appears in green (and dark green once you've lapped it).
Cars in white are the ones you're racing, the first number is the car's position, the second number indicates which lap they're on, and on the right is an estimated time delta. 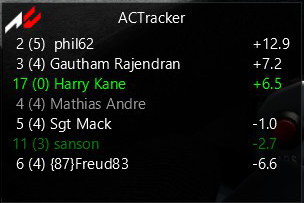 Mathias André
Oops, I replied to the wrong thread :D
At the moment the only way is to change the colours in the code, I didn't use blue in the first place as it was hard to read on the dark background and red pops up well. I'll see if I can improve it for the next version
Upvote 0 Downvote
nice...
Upvote 0 Downvote
Now it works! Thank you for this fast hotfix!
Upvote 0 Downvote
Superb thank you! :)

I would think "red" means bad though and "green" means good. So bad drivers or lapped drivers would be red, and drivers ahead/good drivers are green. This is the other way around which is a little weird for my head hehe. Green = good, red = bad is how most things are rated in life. :) But thanks, great app!
Upvote 0 Downvote
I like that Black Box of iRacing. Welcome to Assetto Corsa. Thank you to the dev.
Upvote 0 Downvote
Good app. It makes job easier on races. Hope it will improve when AC allows it via API updates.
Upvote 0 Downvote
nice and smooth
Upvote 0 Downvote
Very nice idea for an app, especially useful in multiplayer.
Upvote 0 Downvote
Works like a charm: