Would swapping a tspc motor into a t300 base work? 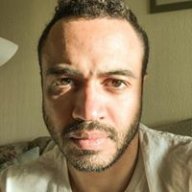 I could actually do this. Or my other option is getting another "similar" motor off the net somewhere.
But basically I was wondering if it would even work?

I was thinking I'd take the tspc motor, install it in the spot where the t300 motor was, and hook up the t300 electrical connections and hal sensor to it.
The only mods I would do would be added cooling (heatsinks on the electricals, extra fan, and air ducts) and a bigger power supply.

What do you think? Would even run at all??

Apparently many people have swapped bigger motors into their t500 with great success.