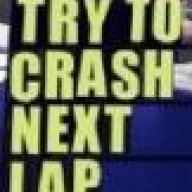 I loved it, im very slow but i thought i was a safe driver, until i left the pits and blew my engine...
Shame that there were only 4 drivers left, but thanks all.
Watching Berkem and Ian ahead battling it out was great, nice one chaps!
Ian, i guess your computer said no as you dropped also! 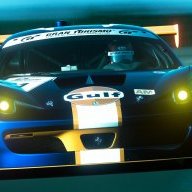 Very solid drive from me, as always first credit had to Ric Kay for setting up the cars for the team. Once again a wonderful car fast but easy to drive.

I was again configured as the teams tourtoise with the slightly more convervative fuel load and engine settings, allowing Ric to sprint off and give the pole sitter a headache. Early on though attrition left us sitting 1 2 and from that point on we settled down to enjoy a battle against each other.

After trading places and trying a few things out we settled into a solid run after the pit stops. Half the race to go and Ric had 30 seconds to reel in ... would he make it?

With 10 minutes left the gap was down to just 5 seconds so i checked the fuel and turned up my boost now i was sure i'd have enough. However the increased power actually caused a few problems and a few slow corners saw Ric in front with only 5 minutes to go. Thankfully the slipstream and increased boost now meant i could keep up with him and we'd discovered that the first sector i was actually quicker though i was not able to turn this into a pass.

We enter the penultimate lap (we rekon we will still have 5 seconds on the clock when we come round again). Turn 1 and Ric misses his breaking point and as he rejoin just ahead i lose it into a spin. We sort ourselves out and i'm ahead but the lost time means this is now the last lap and the final sprint begins. All seemed to go well and as we enter the final turn i make sure to carry pelenty of speed in order to come off the corner fast and prevent being out drafted to the line. Its too wide though and Ric slips down the inside leaving me sat just behind in the draft. My speed is higher but i can't quite pull out and get passed as the line come up on us

Race: Everything was going to plan until my ATI card seized up and took me to the desktop from where I couldn't get back in
Click to expand...

Unlucky mate, not sure if I could have caught you after that little spin at T1 I had. Wasn't my last either, I had a couple of silly spins trying to push too hard. Lucky win but really no satisfaction considering the size of field and drop out rate.

Well done to Dean for sticking in there, from 11th to third overall and the LMP2 class win.

Had a good fight with Dan as he has already reported and it was so close at the end there, nice one Dan.

What on earth is going on with these events? I miss the 40 car fields, I miss the challenge of working around the GTs. It's a great mod, it's a shame to see it being run with such small fields. Hope this isn't indicative of what will happen come league time. 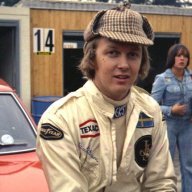 I just thought It would be a good idea to let you guys know... Get the 1.1 update If your going to show up...