Virtual World Series by Renault: Clio Cup is back! 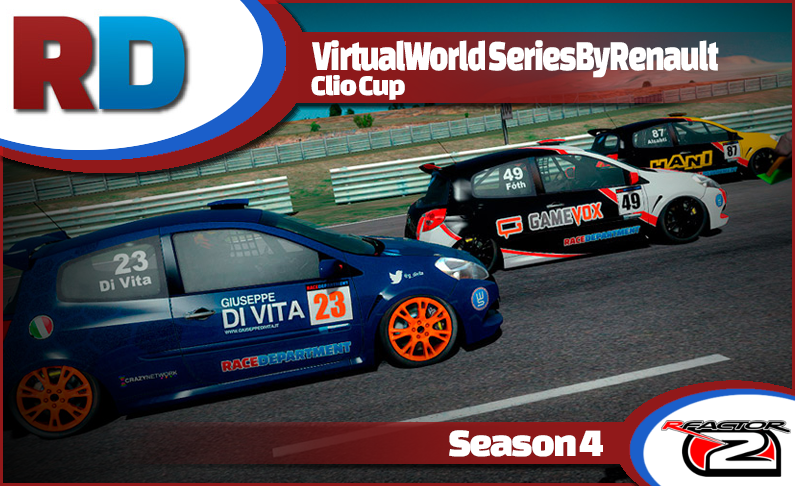 Suit up and strap in for a thrilling Renault Clio Cup Championship, as the Virtual World Series by Renault returns for another season with rFactor 2.

The fourth iteration of the eagerly awaited VWSR Clio Cup is almost upon us. A precedent was set from the off in Season 3, and a fierce battle ensued which went right to the last; we hope that upcoming season brings us the same level of excitement, and more!

This league has been and continues to be incredibly popular, since its inception in 2012, owing to the tough competition, close racing, and uniqueness of a sim-based FWD championship, not to forget the fun factor.

Typically perceived as a "boy-racer's" fantasy, the Clio used in this league is a stripped down racing car for men (and women) with the characteristics of a terrier - cute from the exterior with a small and seemingly innocent bark, but a lot of bite and excitability behind the wheel. This charm, along with the car's nippy handling and acceleration, make the headline act, the ISI Renault Clio 197, perfect for a challenging, hard-fought championship.

However, the real stars are the drivers. Last season's winner, Christian Michel (CDR Motorsports), shall be back again to defend his title. And second placed Jimi Hughes (MadCape Racing) will also be returning to attempt to regain the top-stop after winning Season 2 back in 2013, almost two years to the day before the start of this season. However, with the prospect of many other highly talented drivers joining these two gentlemen on the grid you could say it's anyone's game.

Live Broadcast
Each event has a Super-Pole shakedown, and two races (the second of which features a reversed grid for the top 10 finishers in race one), with the full season comprising six rounds. Events are held each week on Fridays streamed live with professional commentary for a large Youtube audience.

For more detailed information about the fourth season of the VWSR Clio Cup make sure to click here.

Sign up Today
The first round of the VWSR Clio Cup commences at 18:00 GMT on Friday 24th April 2015. The application process is open until Monday 20th April; if you are interested in participating then you can sign-up here.

To get you in the mood, here is the trailer from Season 3 of this coveted championship.