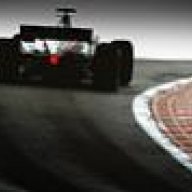 Opinions wanted: I have used the random height value in the track cross section editor to give a little uneveness to a track surface on a track I am making with a tarmac surface.

I'm trying to appoximate the bumpiness, with the sort of feel as maybe the nordshcleife type of track, rather than a super smooth track like Malaysia F1, or a road course that utilises day to day roads. Driving on the Norschleife track (at RFactor Central) seems to give a relatively bumpy ride. Any ideas what sort of settings to use? (Regarding the units, does 0.05 equate to 5cm, for example?)

Presumably also the spacings of the track cross sections affects this. I have left it at default (think it's 5.0 off the top of my head - not in front of BTB right now).

have you tried managing the surface feel by naming the material as a bumpy road rather than making detailed changes to the surface geometry?

No, I'm not sure how to do that. Any advice or suggestions very welcome. Thanks alot.
A

ok - you know how all track materials have to start with road in order for the game to recognize them as a driveable surface... well, there are other settings such as b1road or b2road and so on that gives you a different kind of feel to the driving surface, in this case more bumpy....

it's totally dependant on the sim your track is for... but the main variants are located in the terrain.tdf in rfactor and are buried somewhere in one of the gcf files in evo... at work atm, so i can't be more specific on where to look.... but hopefully this can nudge ya in the right direction :thumb:

Great thanks alot! At work also but will check it out tonight. Am using BTBPro for RFactor.
A

there's a whole load of other settings i've chopped out there... but if neither are any good you can create your own custom terrain.tdf for your track and use your own settings...

Andrew - you've reminded me that it's past time to take a stroll through the ISI terrain.tdf to see what other cool things are hidden in there!

Blo*dy hell didn't realise all those settings and parameters existed! Wow This could change everything.

So is it the material which sets which surface type is used? Where can I see that in BTB? Is it controlled by XPacker when I create a material? Assume I assign one of the types to the material, and can then set it in the TDF should I wish to alter it?

the name of the material is key... doesn't even matter if it's the same texture.... suppose i have MYRANDOMTEXTURE....

alexkyriak said:
Where can I see that in BTB? Is it controlled by XPacker when I create a material?
Click to expand...

You can set it in XPacker under Materials, using the 'rFactor Material Name' dropdown list :lashes:
W

i recomend adding in some of the random setting in btb as well. it is actual variation in 3d geometry in the road, where as the tdf file is canned effect in the same way as the kerbs are sometimes. it's like the difference between realfeel and the default forcefeedback in rF. it's easy to overdo bumpiness as well. some people set it up so the forcefeedback shakes the wheel over a bump, to get the feeling across, when in real life it is the whole chassis and drivers body that feels the bump in a vertical way, rather than the wheel in a horizontal way, but there aint much you can do without a motion base for that... so i use the lowest setting for random, i think it's around 0.01 or something. gives a tiny twist to the wheel, but you can see the road surface is modulated in game, where as i don't think you do with the tdf stuff.

Has anyone driven Norsdchleife in real life? What is your experience of the feel of the track surfaces?

Woochoo - your post just might have given me the boot up the a*se to sort out getting a FF wheel! I've been procrastinating for too long. Obviously I will be better able to answer my own question to some extent by playing with the settings in conjunction with FF. Interesting to hear about the tdf "canned" effect vs the geometry-only method.
You must log in or register to reply here.
Share:
Facebook Twitter Reddit Pinterest Tumblr WhatsApp telegram Email Link
2 comments
American Truck Simulator | Colorado New Industries
26 comments
2020 F1 Austrian Grand Prix | Discussion Thread
29 comments
F1 2020 | Features Trailer Shows Off What's New In F1 2020
59 comments
F1 | Vettel Was Never Offered New Ferrari Contract
251 comments
Community Question | How Long Have You Been A Sim Racer?