The Art Of Endurance

"Endurance racing is a form of motorsport racing which is meant to test the durability of equipment and endurance of participants." -Wikipedia

Endurance racing is one of the hardest and most glamorous forms of motor racing. From my point of view, it is easily seen to be one of the great dreams of the sport to compete in these historic events across the world. Up until now, the prestige and awe has not carried over to simracing in its entirety - but you as the reader must remember those first three words: "Up until now."

Yes, that is correct. I personally believe, even after a small amount of time spent driving it, that Endurance Series, by the rFactor modding group EnduRacers, is the pinnacle of simracing mods. None, not even the best of the ones I have reviewed, are even a speck on this incredible project.

Well, what's the use of telling you how good this mod is if you don't know what it's all about?
Basically, Endurance Series is an extensive mod for rFactor, simulating the 2006, 2007 and 2008 Endurance racing seasons. It will be released in parts, as most of you already know, the subject of this review being the initial release - v1.0. The first pack contains most of the cars that are to be simulated in the mod (to my knowledge anyway - for all we know, there may be tons more cars planned). The four classes of international endurance racing are simulated: LMP1 and LMP2, the prototype classes, with vehicles such as the Porsche RS Spyder and Epsilon Euskadi; and GT1 and GT2, which includes the Porsche 911, Corvette C6.R and Aston Martin DBR9 among others.
Already, the sheer number of cars is mindboggling - and this is only the base pack!

Presentation-wise, the mod is an achievement in itself. A great intro movie, coupled with an ice-cool menu background and awesome menu music combine to make the mod an attractive proposition even before you step into the virtual cars. Hats off to EnduRacers for the best user interface I've seen for ages.

Now then, down to the driving. Unlike my past reviews, which mostly focused on one-car or two-car mods, this is not simply a case of point and squirt. I must provide a breakdown of each class, and their general behaviour... not to mention a lot of gushing - this mod really is that good.

First off, the prototypes. Needless to say, these cars feel like manic lab experiments, really living up to their name. LMPs are generally considered the fastest closed-wheel racing cars in the world - though "closed-wheel" is a term used rather loosely here. They are more like F1 cars with wheelarches bolted on and the steering wheel moved to one side.
They may be manic, but I have never driven anything so addictive since MMG F1 2007 for GTR Evolution. Steering is adequately responsive, making the cars feel like they're cornering on rails. They are twitchy on the limit, but you find yourself laughing with joy as you punt them around the circuit. They can also be tamed quite well, provided you know a thing or two about setups. For example, at a recent RD race in these cars, I changed the right parameters and found that the LMP2 Courage-Mazda C65 I was driving felt beautiful. I can assume that all cars are very responsive to setup changes, and that is to be applauded.
The force Feedback parameters supplied by EnduRacers are superb. I can feel precisely what the cars are doing up front, and I know exactly where the wheel needs to be pointed in order for the tyres to do their job efficiently. What's more, on the high-speed tracks like Sebring and Le Mans, aerodynamic effects have been added into the equation. In the Creation prototype in LMP1, I turned the wheel ever-so-slightly on the straights, and immediately "felt" the air pushing on the car's outside edge. It's mighty fun.
The only quibble I have with EnduRacers' FFB is that I have no idea what the rear end's doing; by the time I realise I'm spinning, it's often too late to do anything about it. But then, that's how LMPs drive in real life, and "numb rear wheels" has always been a chronic problem with rFactor. So, I guess this gets high marks from me.

Next up, the GTs. They are a far more varied field than the LMPs, with many different drive configurations and behavioural aspects. Engines can be found in the front, middle and even rear of cars (though not all at once of course... I mean, that'd be downright nutty). Every model feels different, with their own little quirks and a feeling that you are driving something unique and special, no matter which one it is.
They are generally a lot slower than the LMPs, but are extremely fast in their own right, provided you drive them well.
As a guy more used to GTR Evolution's GT cars, I found it hard to adjust to the Endurance Series GTs at first. Unlike Evo's GTs and the LMPs, there's no auto-blip function. (Perhaps a small explanation is needed here. In a race car not equipped with auto-blip, you must "blip", or tap, the throttle while changing gears during braking. This prevents the transmission locking up because the engine speed is brought up to the same level as the rear wheels - thus saving you tyre wear and time spent in the gravel trap.) EnduRacers have simulated this aspect of GT driving extremely well. After some practice with throttle-blipping [note to self: read up on it], I actually found the GTs very smile-inducing. There's nothing like driving the Porsche 997 GT2 around Laguna Seca, stomping on the brakes into turn one, counter-steering against the skidding rear wheels while revving the engine to achieve a state of equilibrium between the engine, wheels and transmission. Incredibly satisfying.
And let's not forget the force feedback again. If EnduRacers got it right with the LMPs, they certainly got it right with the GTs. Full effects turned on, it feels wonderful; absolutely perfect. Feedback from the front wheels is exemplary, and it has no doubt helped me in chasing laptimes. I can assume that it will be the same for you, the reader - Logitech G25 owners may have to place a deposit for a new desk, though.

And the sound, oh the sound. EnduRacers have used real recordings from the actual race cars to assist in them creating sounds for the mod. I believe they have succeeded immensely. Having driven nearly every car in the v1.0 release, I can say that these are the best sounds of any mod, ever. From the fire-up effects to the surge through the revs, every single engine has its own unique sound and character. You will be pleased to know that EnduRacers have got the sound of the Aston Martin bang-on perfect. Though my personal favourite is the Rotary unit in the LMP2 Courage-Mazda, my ears were certainly treated well by all vehicles in this mod.

Jeez, this is my review "An Oldie but a Goldie" all over again. I'm searching for a major flaw, something that taints the mod's image, but I'm finding nothing. If there really is anything "wrong" with Endurance Series, it's the method by which cars are categorised. I understand the sense in categorising cars based on Series>Class>Team, but if a newcomer is searching for one particular model of car, it's incredibly confusing at first. A lot of clicking was required before I could find the Porsche RS Spyder, for example; buried in the 2006 American Endurance Series LMP2 class, the Team Penske name was my only clue. But once you've gotten used to the large array of names in Endurance Racing, it becomes almost second nature.

Phew, that was a lot of typing. It may have taken some time for you to get to this point, but now I hope you have some idea of what an amazing feat this mod has turned out to be. Endurance series is my highest-rated mod yet, recieving the honour of "Best mod ever" from my hall of fame, for now. If there's a better mod out there, one that surpasses this glorious collection of Sport Cars, I certainly haven't found it. If you have rFactor, and are hungry for some Endurance Action yourself, take the time to download the mod in its entirety - you will find it right here on RaceDepartment. Jump in and enjoy, my friends, for this truly is worth the three-year wait.

Now if you don't mind, I have a Courage-Mazda C65 waiting for me in the virtual garage. 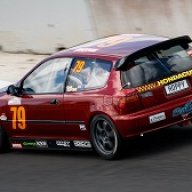 Great write up Rhys,i have been punting the Aston Around LeMans and have found a huge smile on my dial watching the replays.Had to laugh after damaging the front splitter picked up about 20k an hour down the straight and had front end lift off the track going over the crest before Mulsanne.The downforce really does work.I agree with you ...This is one top mod.cheers Kev.

Awesome review maestro, very well written. Thanks a bunch for sharing your experiences, I could not have put it better myself.

Being 'slightly' (understatement of the year lol) hooked on Corvette's, it was surprising to even find myself behind the wheel of that Mazda you talked about for a little while.