will be a long night/day is an interesting track

I can be the semi-ice-breaker here. Will compose a new vid v.2.0 later on

Grats to Reik, Sean and last but not least, David, again!

Q: 2nd (new PB!!! )
As usual with me, I believe in 2 consecutive laps to remember all track details better and get into speed with the qualy setup after the race-setup practice starts. This went perfect also thanks to rad 1 worked at this track! 2nd lap was about 6-7 tenths better!

R: 4th (bitter-sweet )
Good finish! Esp. since no-one in the top DRS-trio didn't miss pit, crash on worst place or miss fuel/tyres during the same stop . BUT it was a close call that The R could have lost a string and become a P into a brand new DPS-trio. I would have danced a success-of-the-greatest-order-dance. However, that didn't happen obviously. To explain all this madness in my head during the latter part of the race, I would need a 1000 words but it was funny - the day-dreamer-mode clicked on hence with a fierce intensity. Some laps suddenly became 1s slower after I had realised I'd been driving on some auto-pilot thinking about all sort of things like what a pity it was to not have my Aunt celebrating christmas with my family, how I should take on the new computer security course, the weekend plans, why Reik did so many small mistakes, what Reik looks like, trying to remember his pictures, how I should do to not wake my lady after the race to piss her off as usual, and many other not-so-relevant things.
So, after 37-38 laps of managing to keep Reik at somewhat secure distance (except for one intense wheel-to-wheel moment (will be video-covered)), I had him not that close compared to the other laps. Maybe it was 0.7-0.8 cushion. During many times we had 0.3-0.4. At those moments serious concentrate racer-mode managed to be on, luckily. But at this time, yes, head began to think about something, dont remember what, auto-pilot put the car well outside racing line in entry to corner before back straigh... A gap became 4.9 which I furiously managed to get down to 3.5 for my self-esteem's sake. I bet Reik didn't push tho, but please don't tell me that...
It is soon time to consult my tennis-trainer stepdad as a sport mental coach.

I was sceptical that this second tunngle race at Zand would be that fun, but it really was! It was a blast to somewhat keep up with Sean also. Don't know what has happened to David tho, wonder what has gone into that red bull of the Turnbull's.

Thanks to David, Nico, all you presto friends and the efforts to handle the tunngle situation! Grats to all!

Kept up my run of pole's this season with a great lap on the first attempt, I actually got to the last turn thinking it wasn't going to be great but what a surprise when i crossed the line.

Again kept up my run of form into this one, all through practise I just kept getting faster and faster at the track, Obviously suited me very well, Got a really good start and never looked back, managed to just concentrate hard and pump in the laps all the way to the end, pits went smoothly, everything just worked well for me, not much else to say really.

Grats to Sean and Reik and everyone at PrestoGP for having everyone finish the race at probably one of the hardest tracks there is, Well done everyone

p.s Peter, I have a secret, only Sean and Vale know about this secret, its all to do with what I wear on my feet, gives me the ultimate in pedal control....... 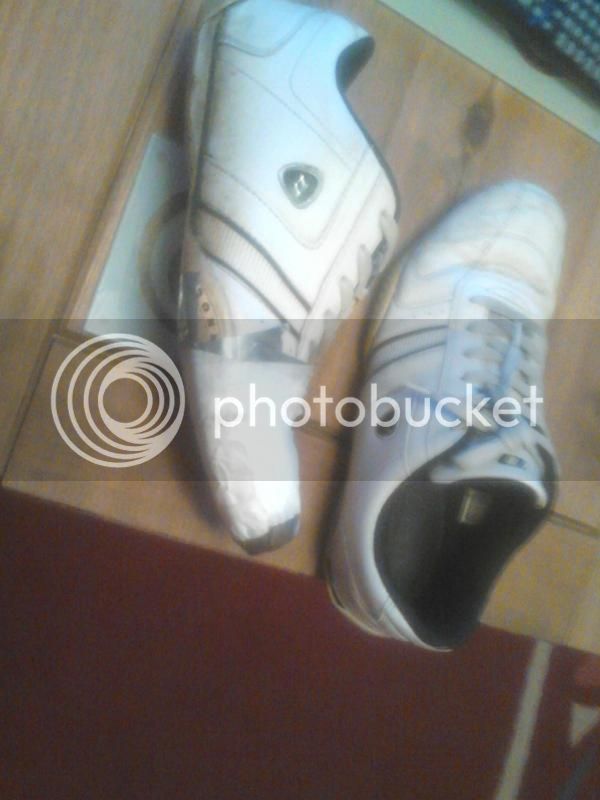 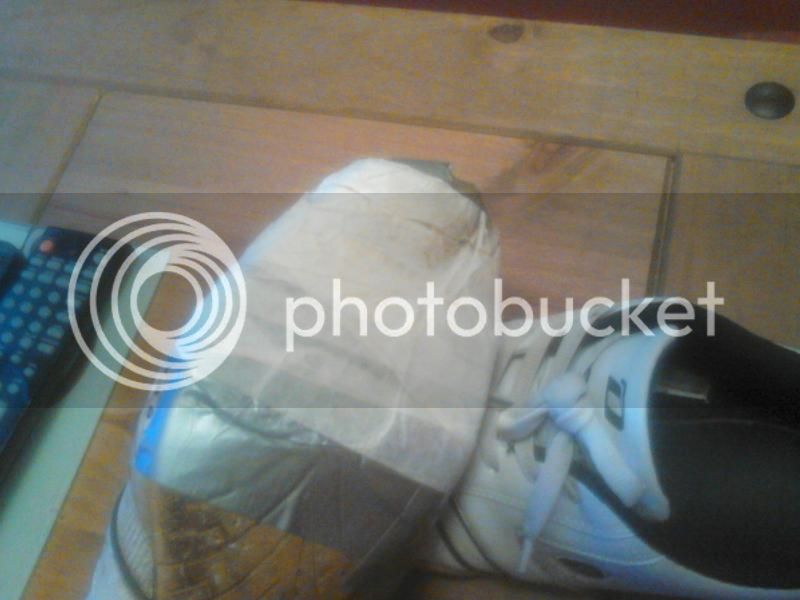 Their called the M-Duct trainers (M = masking tape Duct = duct tape) the bloody things fell apart so I improvised duct tape holds them together, masking tape makes them slidey, I've been trying to get used to another set of trainers but its hard work trying to find a pair with the same feel as these, I love my old tatty taped trainers
Last edited: Nov 6, 2014

Lol nice ones David! Seriously couldnt be without my super slim sneakers but I do now realise the huge importance of not only tape but the right one for the right shoe-zones. I will make a try and consult you later.

The race was fun for the first 10 or 12 laps as I was chasing the group of 3 in front but I fell back after the stops somehow...not sure how cus they both went very well...maybe that was the issue...2 stops? or maybe just the 1hr practice didn't help

Grats to everybody for 0 DNF's on such a dangerous track...great effort all round

First of all big grats to David! Nothing but a class of its own (as we're getting used to).

Of course also well done Sean for 2nd, big thanks to Peter for making this a very intense race and to all great Presto drivers, who made this event a success.

Not so happy with it. First lap wasn't so good with a 1:25:8xx. Second attempt looked better by -0,3 when I made too big mistakes in the middle sector. Starting P2 could've made it another race but that's racing.

We all had a good start and managed to brake it well into T1 so the first cars held their starting positions. From there on it was chasing hard Peter all the race. It was like coming closer and closer until making a very tiny mistake to loose 1 or 2 seconds. I pushed very hard all the time to somehow come into an attacking position but only managed to do so once after the first stop.

When the time for the first stops came I was around 2 seconds behind Peter and pitted one lap earlier to hopefully undercut him. Stop went very well (risky entry) and first part of the outlap too but then I arrived at the fighting bunch of April and Nico. They were in the same lap and fighting for position so I could just sit and wait. We entered s/f-straight and it looked like April was heading to pits but it was an overtaking move out of Nicos slipstream. So I used double stream and went 3-wide close to the pit wall. We perfectly managed our braking points and to hold the corner lines. I was through and Peter entered in front of me the same time - close stuff.

On fresh tyres I felt a bit quicker than Peter and closed the gap quickly to make pressure on him. When he left the chicane a bit worse than me and I had a perfect last corner close behind him I had enough slipstream to catch him. Peter defended the inside and we went side-by-side through T1. I slightly struggled at the exit so Peter had the inside for T3. That was the only time I could catch him on my own.

Later I had a small mistake and gap was around 2 seconds until last stop. Again I pitted earlier, which didn't make a difference in order. I pushed hard in the last stint and again felt a bit quicker on fresh ones, because I closed the gap on Peter bit by bit. Finally he made the mistake he mentioned in lap 38 or so and I luckiely won P3. Don't think I could have won it in a fight, because his defence was very strong today.

Very sorry for you mate. It often appears to me too that other things come to my mind when driving. It's the biggest challenge in racing to be focused close to 100% of the race. For me that's nearly impossible.

See you all in Brazil for another nice challenge!

PS: I also wear thick socks, because my heels are standing in one place all the time and therefore the feet have to gently slip over the pedals when pressing and releasing them...

Q 11th not so far from my pb
R 12th great job all in T1 usually I see all from back the track have a good wave on tarmac and pass is a bit hard but try is so fun, the story is : in T2 lap 1 side by side me and April and for avoid any contact a touch white lineas a result the grass i lift the feet and recover the car strange really low the time lost so push a bit and Im behind Nicolai and Bob so what should happen, good battles for the position, I dont remember how (sorry guys but I was too focused on track)Nicolai and Bob are at back front me April so i pushed for catch her we were on same pace and with a little gap the game was fun it lasted a bit of laps then between T5 and T6 I was a bit too on right so I lost the car and lost the line for dowhill turn so managed the car for avoid any barriers I did a goal this time any damage but lost many seconds,again push for reduce the gap but after 2 or 3 laps I did a bad lap lost many time the car so a speed look at XD front tire is red,no much value but i decided lift a bit the feet equally, good solution (I think mental) recovered the pace,certenly the race was over but I dont leave so alone race but after pit2 at 10sec Nicolai so I say myself "I try" fresh tires good feeling 3 laps 2sec gained I thougth Nicolai pitting before me my tires sure are better think we were on 10 or 15mins to finsh a chanche possible i just arrived at 7,5 sec that the blue flag is there just in hidden angle I managed for let pass all the blue band strangely all in same place at T3 and for finish the race,its a nice track I like it and I was hoping for a better result but a bit of mistakes have a price.

R 6th
(3 stints : 64 + 58 + 58)
Amazing racing with Tim and Vincenzo, everytime within a few seconds of each other. This track is really good, allowing close racing and different racing lines sometimes, and thanks to David we all had a very good setup.
I felt I was slower overall, and couldn't avoid Tim to pass me, but I was faster in the pits somehow, and because of that I could pass Vincenzo and stay in front of him the last stint, even if I had to defend very hard my place.

Can't race at interlagos, sorry about that. CU the race after
You must log in or register to reply here.