Ricciardo: We Can "Sneak into the Points" on Sunday 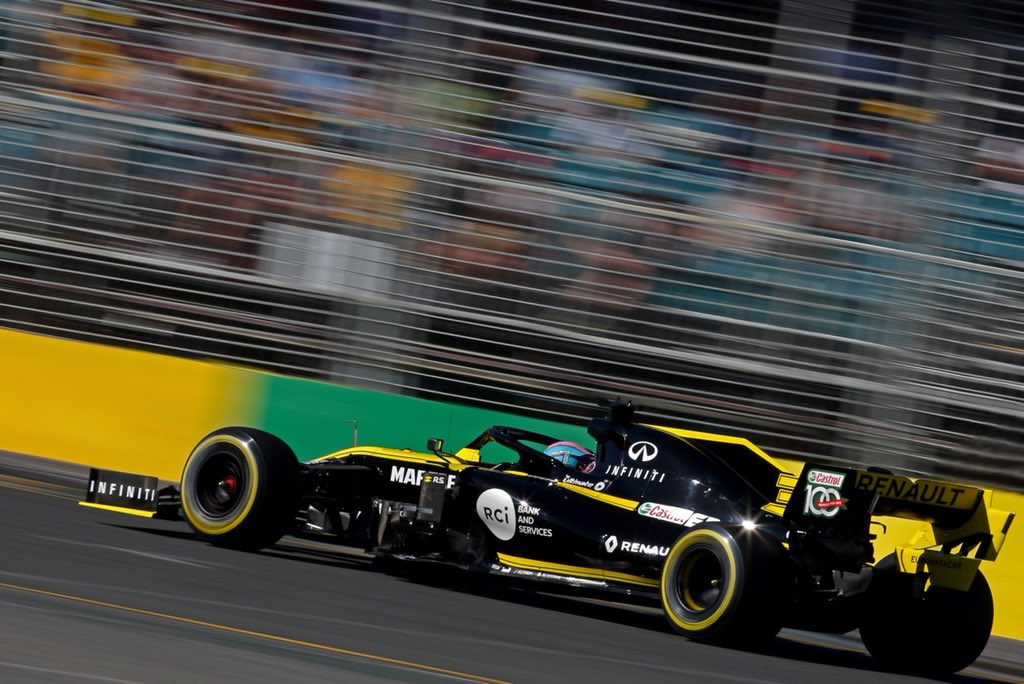 New Renault driver Daniel Ricciardo remains confident he can grab a point or two in front of his home fans on Sunday, despite a disappointing qualifying session.

The Australian driver has often aimed for race victories in Melbourne during his Red Bull days, however now firmly installed in the yellow of Renault Sport, the likeable driver has had to temper expectations of the new partnership - and hopes that points can still be on the cards despite a difficult qualifying session on Saturday afternoon.


“I knew it was going to be close,” he said. “But I did believe we did have the pace for Q3. I don’t know how deep we could have got into that top 10, but I was just half a tenth to get into Q3 and that was there, that was in the car.

“I actually lost it in the first sector – I was down a bit, close to a tenth there. So that alone, I was more frustrated with myself because I knew it was there in the car.”​
Qualifying wouldn't be an ideal session for Renault, both drivers failing to make it into Q3, however despite being out qualified by new team mate Hulkenberg, Ricciardo believes the pace is within his new car, and has hopes he and the team can "sneak into the points” on Sunday afternoon:


“Normally if I don’t qualify as well as I think I can, I seem to carry a little chip on my shoulder for the race,” he said, “and that normally helps me out, so I’ll use this fuel for tomorrow.

“I definitely have a lot more confidence in [the car] today. Nico’s long run [on Friday] was strong, so very optimistic for the race. It will just be a case of if we can pass and attack, but I’m sure we’ll sneak into the points.”
​
Renault will have a free choice of tyres thanks to qualifying outside the top ten, the first of the teams to have this opportunity, so remain well placed to spring a surprise or two tomorrow afternoon.

Hope you wasnt eating your dinner and writing again Paul.

For a team that wants to knock down the currently established top 3 to aim for points is rather underwhelming. If Williams or McLaren would say that yes, but Renault?

With what they said before testing they should be able to sneak into the top 3 in the race, but i guess they are far away from that.
A

Norris, a rookie, is faster in the McLaren with the same engine, so I have to say, a disappointing result for Renault.

Disappointing but not unpredictable... let's see what happens in the race, I don't think will much though...
A

pcraenme said:
Norris, a rookie, is faster in the McLaren with the same engine, so I have to say, a disappointing result for Renault.
Click to expand...

Norris whose Dad is worth 200 million and mates with Zak Brown. Wee know how he got into F1 yet has in his first Qualy beaten some apparent superstars.........

Literally if you are worth millions and mates with an F1 owner you too could have your kid racing in F1 if you start when he is 7ish (this is where the limitless money comes in handy)....... madness, what a 'sport'...
It is almost like the talent pool of Motorsport is just made up of rich Daddies kids and rich gentleman drivers....laughable...
I hope Norris continues to embarrass some F1 drivers all season.... I like him....

Dan's stock will drop like a hookers knickers on pay day.

Hulkenberg have won the first battle between the Renault drivers. Lets see how it goes the whole season. Hope for him he can do the Job in the race. Ricardo is a good overtaker. So why not...
Lewis was today outstanding with his rocketship. Bottas cant never win from king Lewis. Ferrari little dissapoint me. Max drove the car like a tiger over the limit. P4 was the Maximum for Redbull.

Was hoping for more out of Renault - my favorite team and I love watching Ric do his thing, but this is so far not looking promising.

I wonder what happened to Gasly - does anyone know? I was doing some chores during Q1 so wasn't watching too close. Surely he can't be that much slower than Max.
L

midfield racing will be awesome tommorow i bet but podium is, if nothing happens,
1st Ham
2nd Bot
3rd Lec
vettel out cause of colision with max =P

When everybody had their 'one up' moments... sigh'
I guess you can't see their one ups if no one went below. Sadly it's Renault. More than two seconds off pole! That's 2 light years away in racing terms! It's showing who's telling the truth during those awkward Horner comments against Renault.

For sure it will be all about Tires. Merc are bad on tire management. Bottas can't battle, so I go for Vettel and Max.

MacLaren in front of Renault, there is something wrong in Renault's Paddock.

I remember that Ghosn hired Prost in order to check what happened in the paddock and Prost hired Marcin Budkowski to check what was wrong in Enstone.

Williams! Can u stop sandbagging
B

ah yeah same as last year, 1 parked that williams at the side of the road,and set it on fire, 2, rich boy, daddy buy me a team,out in 1st q,let see he is like a guy who been divorce 3 times ,it not wives,meaning the car,the problem is you,i heard colleges taking bribes to let rich kids get in,hint,hint, stroll senor, 3 no boby expect reanult to be a top 3 teams not by a mile
P

Nick Hill said:
I wonder what happened to Gasly - does anyone know? I was doing some chores during Q1 so wasn't watching too close. Surely he can't be that much slower than Max.
Click to expand...

He drove only one stint in Q1 and RB thought he was safe, but the track suddenly got much faster at the end of Q1 and he dropped off to 16th and could not respond anymore being in the pits. I would say a tactical error from the team. It will be interesting to see how fast he can drive through the field tomorrow, since the midfield seems to have a good pace as well. But, 3 DRS zones, with improved DRS this year, will help him maybe.

You are that person that voted for Kubica for the win, didn't you?

You totally did, didn't you?

I like to see an angry daniel avocado !
You must log in or register to reply here.

CAN WE RUN NORDISCLIFFE, HERE IS HOW?