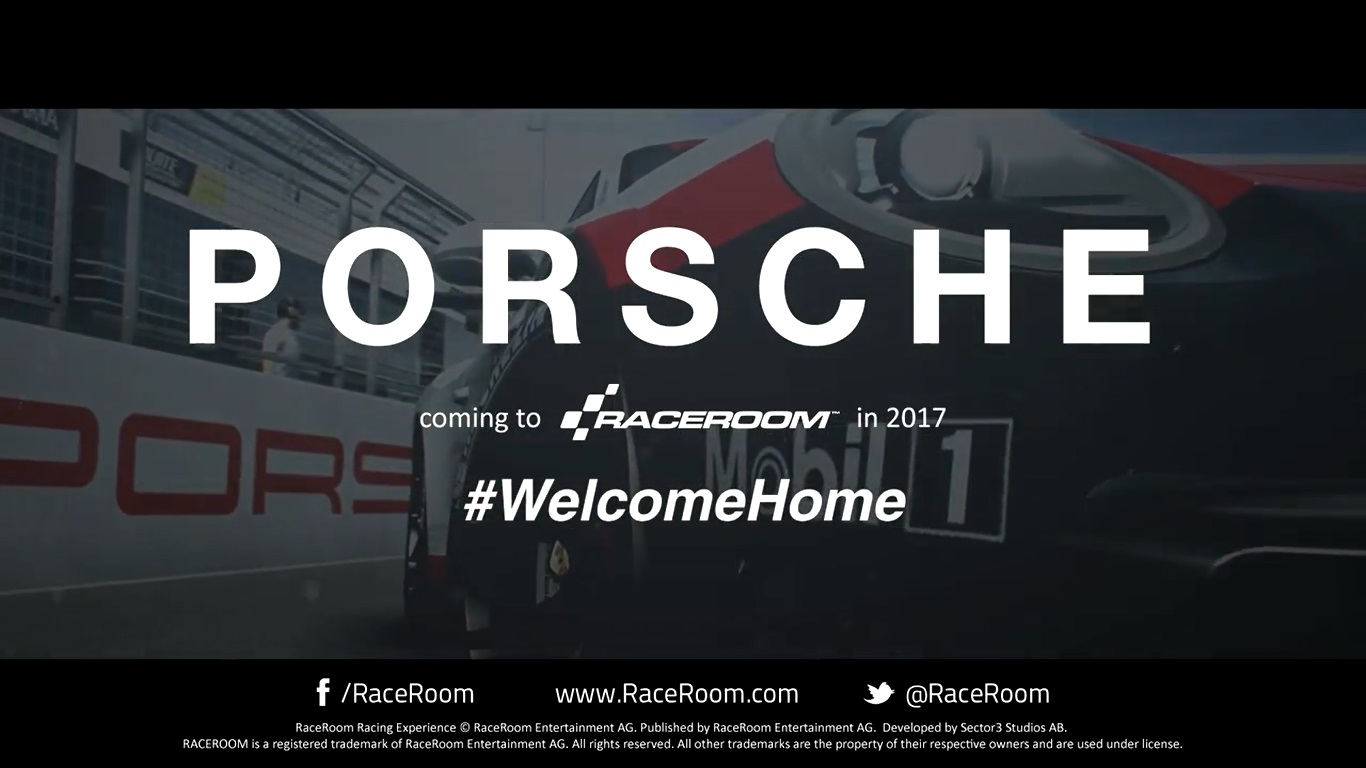 Sector3 Studios have revealed a new licencing agreement with the historic Porsche brand, meaning R3E will soon be receiving plenty of content from the German manufacturer.

Securing a deal to represent the Stuttgart marque in their RaceRoom Racing Experience title, the agreement has been some time in the making behind the scenes, and will bear the first fruits of the labour during 2017 with three new cars planned to be deployed to the sim this year, and at least another six coming during 2018.

As can be seen from the new announcement trailer below, it appears as if Sector3 have already been hard at work behind the scenes working on the new Porsche 911 GT3 Cup (991 II), with the trailer indicating that the car looks close to a release ready state of development.

You can check out the trailer below:

Speaking of the announcement, Sector3 confirm they have committed to a "long-term agreement with the goal of bringing you the best virtual Porsche Motorsport experience". When we spoke with the studio earlier this year it was clear from our conversations that this agreement is not just about releasing new content, but could stretch into further areas such as competitions and driver experiences in the future.

Undoubtedly great news for fans of the sim, we will eagerly await more information on which cars are going to be included, and if the deal now means an update is scheduled for the already in game ADAC GT Masters packs, which to this point have been making use of the RUF placeholder cars to fill out the racing grid.

Now that Sector3 and RaceRoom have announced the new licencing agreement it means that Porsche are or will be represented in almost all the major racing simulations. The once incredibly difficult to acquire cars are now expected to appear in no less that five games, ranging from console giants Gran Turismo and Forza, to Project CARS and Assetto Corsa, well and truly returning these incredible vehicles to the forefront of the sim racing genre.

Indeed Sector3 and the former SimBin development team have been courting Porsche for some time, with Sector3's J-F Chardon explaining that the ambition to see the marque in their games is something long desired by the development team. When asked what it means to secure the licence for RaceRoom Racing Experience, Chardon was understandably pleased with the agreement:


"It means a lot because it's been a very long chase on our side. Back in the days we had already been talking with the former license holders, several agreements were brought on the table but never materialized. It just wasn't as good as working directly with Porsche. Being able to finally go through with Porsche on our intentions is a great feeling".​
Indeed now the relationship has been set in stone so to speak, Sector3 have been incredibly impressed as to the level of access afforded the team when putting together the virtual renditions of the selected race machines.

Working closely with both Porsche and some professional race teams, Chardon added:


"Our artists had what they called the "most complete reference package ever" to work with, and we have also a lot of data about the car that we can use for developing the handling".​
What's more, Sector3 are continuing their tradition of working closely with real life teams in an effort to produce the most realistic experience possible, something which will continue with the new Porsche models, although which teams are involved in this process remain a close secret for the time being...


"Our GT3 Cup model (which you can only see this season in the Porsche Carrera Cup Germany and the Mobil1 Supercup) is also made in collaboration with a couple of racing teams, but we'll share more on that topic soon".
​
We already know from the licence announcement that nine models will be developed over the coming year and a half, of which we have confirmation that the Carrera Cup will be the first of the new deal. However the rest of the roster of cars is still something open to discussion, as Chardon went on to explain to me earlier today..


"It is indeed 9 models at the pace of 3 each year. The first three were selected together with Porsche and are already well advanced in development. The next 6 are still to be decided. The selection of modern cars will follow Porsche Motorsport activities, while we have a couple of historic cars that we know we want to make".​
So all in all it's been a busy Saturday afternoon for fans of the simulation, with more interesting info to be released over the coming weeks and months.


RaceRoom Racing Experience is a free to play simulation exclusive to PC with additional content available to purchase via the in game RaceRoom Store. 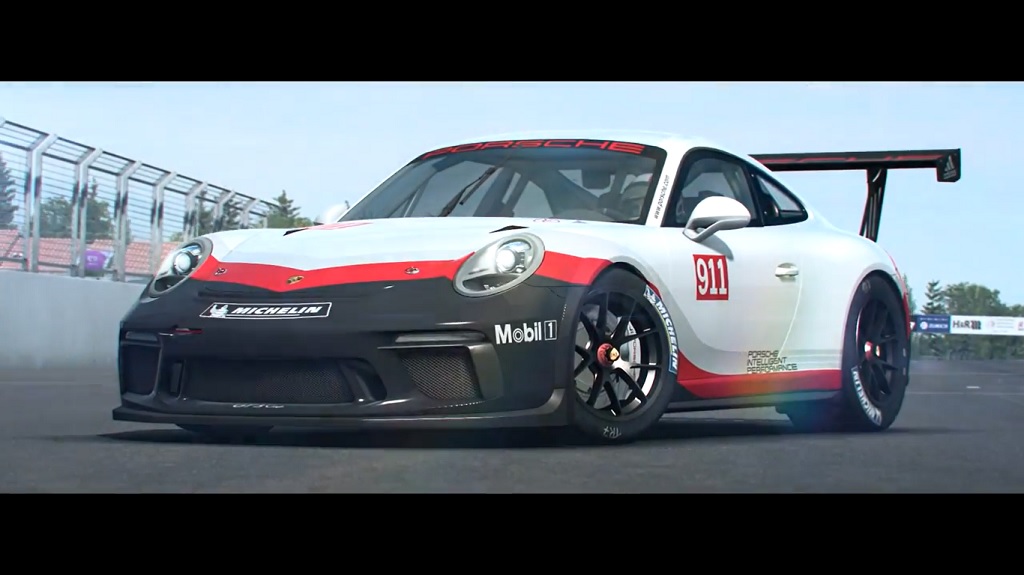 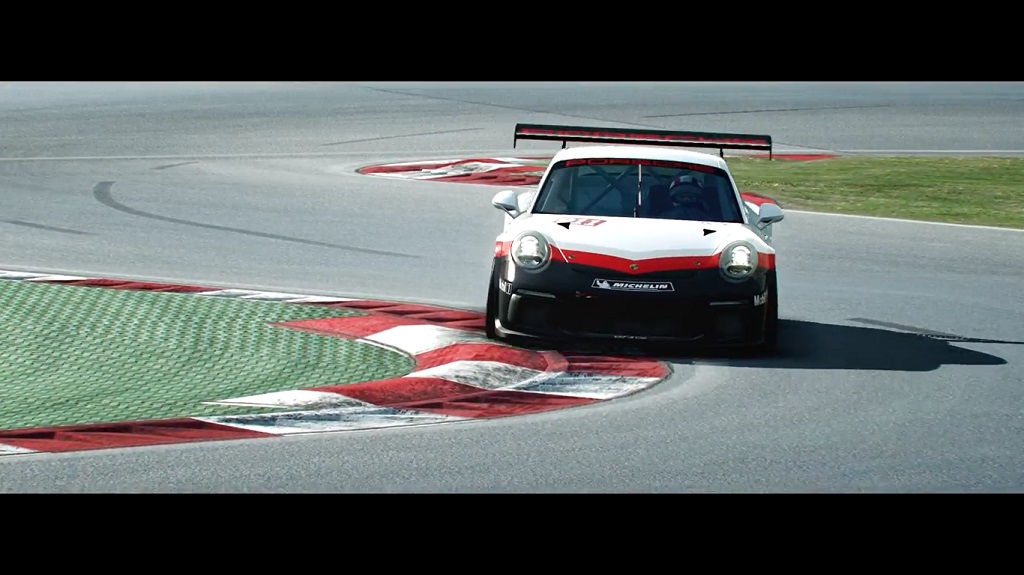 Check out the RaceRoom Racing Experience sub forum here at RaceDepartment for all the latest news and discussions with regards to the simulation. Take part in our awesome Racing Club, download a setup or just hang out and chat about the game with your fellow fans of the title. It’s all here at RaceDepartment.com!

So Porsche at last.. happy to hear of the deal? Which models would you like to see included? Let us know in the comments section below!
Last edited: Jul 22, 2017
Sort by date Sort by votes
C

Premium
I keep checking my emails , but still nothing from Sector3 to make any cars
Upvote 0 Downvote

Premium
Sector 3 has great graphics overall,...but it will be the Audio area of these cars I will be looking forward to the most....and great teaser video, it had the hairs on the back of my neck stand up...lol
Upvote 0 Downvote
C

Premium
Awesome news, Porsche are always a welcome addition in my book

They will nail the sounds for sure , that has always been sectors 3 ace since the days of SimBin the modding team. people want more features but DLC pays the wages & allows for more game development & updates that are free.
That is the deal that we have to live with these days ; and lets us not forget RaceRoom will be moving over on using the Unreal engine in the next few years.
What I would like to think they are doing now is using the time between now and the next gen version to trial & add those missing features while adding more cars & tracks along the same time line.
So those features can be in the next gen sim from sector 3 from day one & not the stuttering mess that RaceRoom was for its first few years under SimBin things only took off after Sector 3 kicked off.
Upvote 0 Downvote

It's time for sim racing games to stop sprouting out cars and tracks. It's better to innovate or improve (new) features and such.
Upvote 0 Downvote
U

RinusDirtRally said:
It's time for sim racing games to stop sprouting out cars and tracks. It's better to innovate or improve (new) features and such.
Click to expand...

Disagree. You can be as innovative as you like, but if you lack content that people want then they wont buy or play your game. It's also, as usual, a case of money. They still need to have an income to pay the bills while they create patches and new features.
Upvote 0 Downvote
C

Paul Jeffrey said:
It is indeed 9 models at the pace of 3 each year
Click to expand...

RinusDirtRally said:
It's time for sim racing games to stop sprouting out cars and tracks. It's better to innovate or improve (new) features and such.
Click to expand...

Great news i cant wait to drive and hear these machines in Raceroom!

Hope that was an attempt at sarcasm?
Sector3 have yet to release a content only update....every content release has come with new features or updates to the engine as you can read in the following link

A multiplayer ranking system has been running in the background collecting data for sometime now, tire model is continually being updated with every content released based off new data from pro teams, the Unreal engine is being worked on as we speak that will allow for many current missing features to be added to the title.
The esports side has been recieving alot of work aswell to make the competitions run smoother.
Seems with every content release a misinformed comment like this pops up?
Upvote 0 Downvote
U

Unfortunately it's a given for pretty much any game. If people don't see something they really want and have been waiting for, the DLC/patch is rubbish regardless of what else it contains.
Upvote 0 Downvote
C

(Reading through some of the comments, we really need a "disagree" reaction. There's only "angry" or "sad" now and that can be perceived in multiple ways.)
Upvote 0 Downvote

It takes time. Modelling, liveries and physics. Might sound simple, but every step has to be done over and over again, each time sending a new build over to Porsche.
So 4 months for a car seems fair enough, especially since I doubt they'll only release Porsches.
Besides, considering the fact that there's usually more than a year between reveal and release at S3, 3 cars a year is a staggering pace.
Upvote 0 Downvote
You must log in or register to reply here.