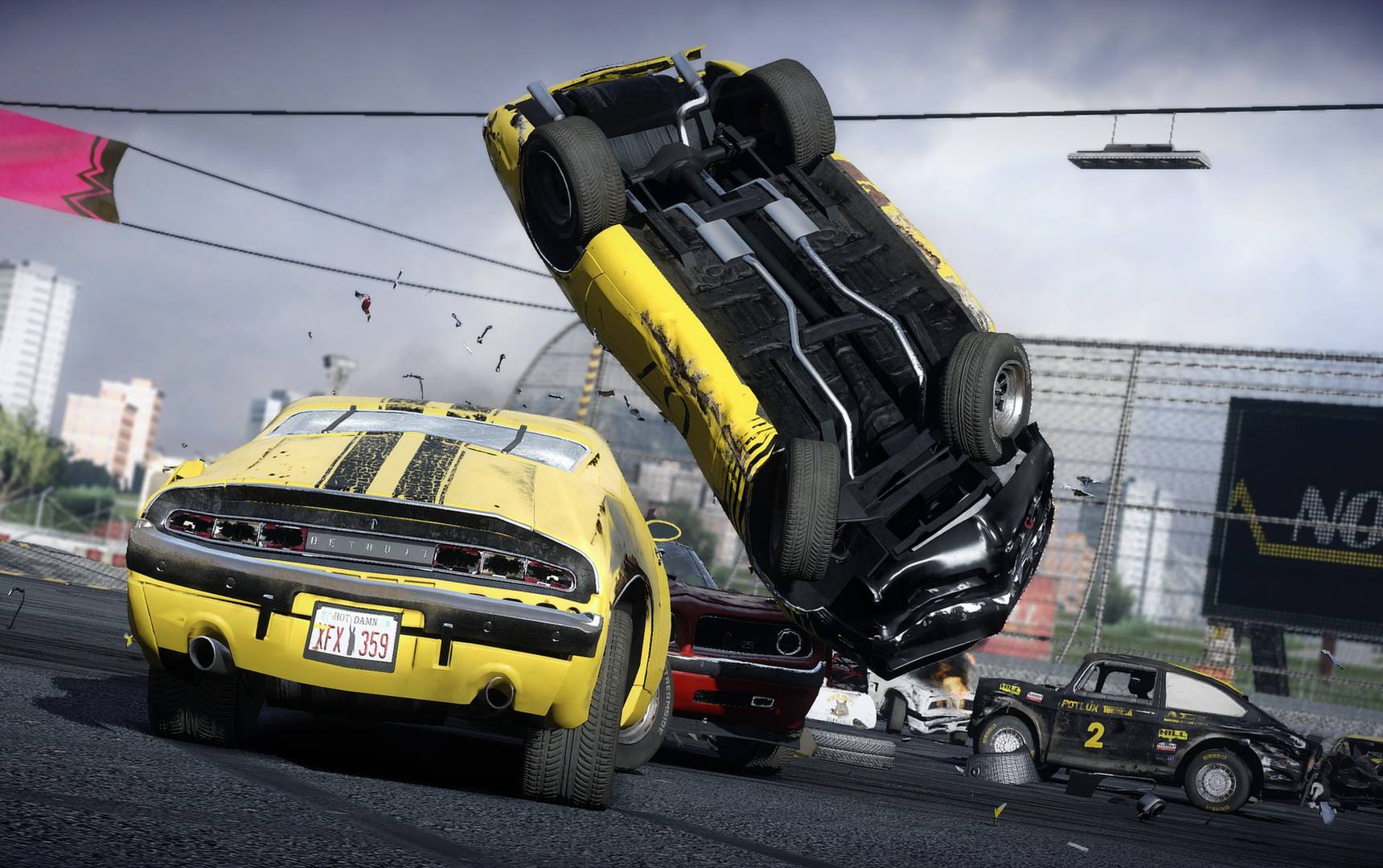 BugBear Entertainment managed to get their Next Car Game tech demo reviewed by YouTube guru PewDiePie.

Who you are asking? Indeed just a regular guy playing video games like we all do ... but with 27,000,000 subscribing bro's on his channel a huge and effective marketing machine. And lets be honest, getting a racing game under the attention of so many potential racers is always good thing for our little niche.

The video features seven minutes of over the top crashing, bashing and wrecking and does show the power of this amazing game from Finland: insane damage details.

Its almost unbelievable that the creators of Next Car Game found themselves without publisher support only a few years back when development started. Even a successful backlog of titles such as the FlatOut series and Ridge Racer didn't help.

Thankfully the racing community embraced NCG and the development of the game is now progressing at full speed (until it probably hits a gigantic wall or ramp ).

With updates only happening every couple months (or more) I'm not sure I would call it's progression "full speed" but it does have alot of potential to be fun.
G

Premium
I look forward to your vids and reviews.

I hate this guy with a passion. Game definitely has potential.

Love the game, can't wait till it's got a big chunk of multiplayer added. Won't be watching that video though. I value my ears and eyes.
Last edited: Jun 11, 2014

Developer here. I have not been a PewDiePie follower before, but holy **** when somebody linked an NCG video and it had like 3M views after just days after its release...

Anyway, if you have any questions I can try to answer to the best of my knowledge.
G

TapioV said:
Developer here. I have not been a PewDiePie follower before, but holy **** when somebody linked an NCG video and it had like 3M views after just days after its release...

Anyway, if you have any questions I can try to answer to the best of my knowledge.
Click to expand...

Hi, thank you for making yourself available this way.
I got a question:

Why did you choose Pe****** to showcase your driving game?

The fact is, you want publicity, you want people to get to know your game, you want feedback, you want to build excitement and pursuade potential customers.
The absolute view count on a Youtube video can be deceiving, tho. Did people who've seen his video got a fair look at your game? What fraction of people who've seen this video will act upon it do you think?
I think it's targeting the right audience you should focus on.
Through youtube demographics, channel owners can see in which countries and by what age group their videos are being watched. Pe******* caters to a specific audience, a younger, less mature audience - an audience who watches his videos more to be entertained, to get a giggle out of it, than to be informed or being presented with enough analysis to build an opinion on what has been visualised.

I think the game, you and your fellow developers will benefit not targeting this particular demographic, but rather a more mature, more informed audience here at Racedepartment, or one that watches TotalBiscuit's videos for instance. He has a University education, is a respected video game critic and knows how to judge a game by industry standards and on objective and subjective grounds alike.
I believe the latter approach will yield you on average a better and fairer perception of your game in the public eye.

We haven't chosen anyone. It's the other way around: people make videos of our game if they think it will entertain their audience. In most cases they come as a (pleasant) surprise to us and usually they don't ask for our permission (and they don't have to, we even have it written on our forum that anyone is free to post and monetize videos of NCG).

TapioV said:
Anyway, if you have any questions I can try to answer to the best of my knowledge.
Click to expand...

Hi Tapio.
I also made a video. Not quite as many views as PewDiePie's though, I'm sure
Anyways. will you consider using the track I designed for Destruction Derby when I was 12 in your absolutely brilliant game?

Cheers, and keep up the good work,
Alex

Premium
Wow, that guy is annoying. And I can't stand the picture in picture "watch me play!" cam (his, or anybody else's; but if Mary Kish had a cam...)

But, this game deserves any pub it gets. It deserves to be made and I can't wait for the next updates, although the demo is very polished.

Its too bad that most of the youtube footage is in the sandbox. The racing is great fun (even though I can't keep up with the leaders on a joypad). The best feeling is hipchecking a car in the air on the figure eight track so he lands in a wall or into a dead car.

I've got some annoyances and some suggestions, but I'll assume there's a bugbear forum on which I can post them? (I just can't access it from work...)

The devs are frequently visiting RD to answer your questions.

Alex Odell said:
Hi Tapio.
I also made a video. Not quite as many views as PewDiePie's though, I'm sure
Anyways. will you consider using the track I designed for Destruction Derby when I was 12 in your absolutely brilliant game?

Cheers, and keep up the good work,
Alex
Click to expand...

This is a Fun-tastic track that you have designed! I would love to try it some time!