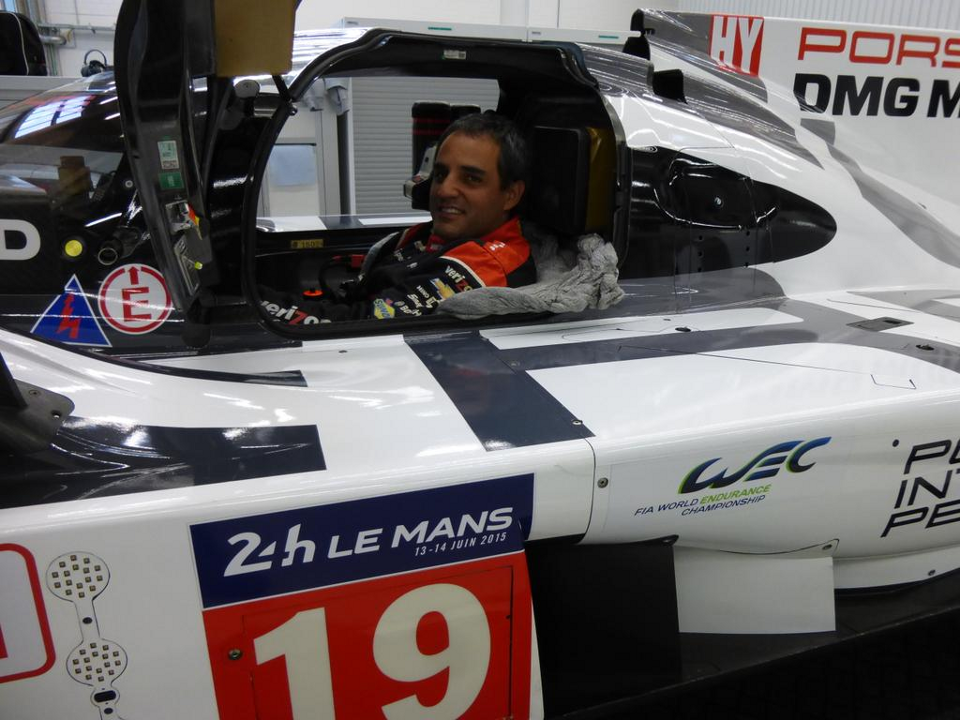 Former Formula One race winner and current Indycar driver Juan Pablo Montoya has been lined up to take part in an upcoming test session with Porsche, during which he will sample Porsche's Le Mans winning 919 Hybrid.

The Colombian will be taking part in a 'Rookie Test' session which is scheduled a day after the upcoming 6 Hours of Bahrain.

The announcement, which broke after Montoya was photographed having a seat fitting with the team, has sparked rumours that he will attempt to become only the second driver in history after Graham Hill to complete the 'Triple Crown' of motorsport; with Montoya having already won both the Monaco Grand Prix back in 2003 and the Indianapolis 500 in 2000 and 2015.

In addition, when we take into account Montoya's record at the 24 Hours of Daytona where he has been victorious on three occasions, as well as taking 2nd place twice, and that Nico Hulkenberg, who won this years 24 Hours of Le Mans for Porsche, will not be able to take part in the 2016 event on account of a date clash with the 2016 European Grand Prix in Azerbaijan, the possibility of Montoya racing at Le Mans seems a much more likely possibility.

Do you think Montoya competing at Le Mans in 2016 is a likely scenario? Or perhaps nothing more than a pipe dream? Or maybe even that the veteran racer would not cut the mustard? Let us know below!
Last edited by a moderator: Oct 21, 2015
R

One day he will be regarded as one of the greats.

Robert Waddell said:
One day he will be regarded as one of the greats.
Click to expand...

Wondered whether you had seen this Robert

Premium
I like Montoya for his honesty and because he’s just a 200% committed racer, doesn’t matter what series. Would be nice to see him in a LMP1 next year at Le Mans and perhaps taking the triple crown.

Premium
I was never much of a fan of Montoya when he started in Indycar, he seemed so arrogant beyond belief and made a lot of enemies, and he beat Dario to the championship!

Then something odd happened, when the team changed to Toyota and the car became very unreliable (and on most tracks just wasn't working) he never once bashed the team or the engine supplier, he just got his head down and drove the wheels of things, and still picked up the odd great result. His whole attitude impressed me so much I've been a fan ever since.

Yes he has the odd strop, but he's a racing driver, they all do, he's just more vocal than the others!

He's also the sort of driver that I thought I would never see sharing a car with team mates but again he surprised me with his attitude at Daytona and other Tudor Races, even when things went wrong he still kept a calm head and just got on with the racing.

It would be great to see him at Le Mans

He sparked my curiousity back to Indy after so many years since the split. ( I still call it illegal eviction, split is a news media term.)

Premium
He really is a very good driver & probably one of the more under appreciated figures in motorsport (IMO).

He did not do himself any favors in the early part of his career, as he was extremely abrasive and he put a lot of people off him for life. He seems to have mellowed a lot over time and has put together some really nice career achievements in the process.

Would be great to witness something historical like this, 2nd triple-crown of Motorsports and all that.

Premium
Legend. I had the fortune to meet Montoya while he was racing for Williams F1. I loved his 'No BS' approach to racing and loved his attitude.

Love or hate his brutal honesty, once he flips the visor down, you know he will drive the wheels off whatever he's piloting. Thats what winners do