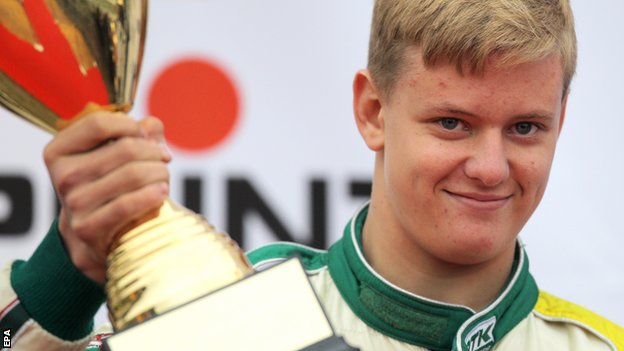 Michael Schumacher's 15-year-old son is to race in Formula 4, a series for promising, young drivers

"We have watched his skills in test driving and are looking forward to a successful season," said the Dutch team's owner, Frits van Amersfoort.

Michael Schumacher is continuing his rehabilitation following a serious skiing accident in December 2013.

The German, who spent nine months in hospital after suffering life-threatening head injuries, is the most successful driver in Formula 1 history with seven titles between 1994 and 2004.

His son begins his Formula 4 career in Germany on 25 April.

Let's hope the press takes it easy on him. Don't needle him for questions about his father's condition. Just let the young man race.
Reactions: Andrew 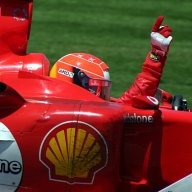 Great to see,
Hopefully he has lots of success and another Schumacher back at the top !!

The most important thing for him now is to have the life of every driver in the F4 paddock. But it is not easy when your surname is (officially) now Schumacher and your father is a legend.
You must log in or register to reply here.
Share:
Facebook Twitter Reddit Pinterest Tumblr WhatsApp telegram Email Link
14 comments
2020 RD MINI Challenge...Returns!
1 comments
Drift 21 | New Update Adds EBISU West
9 comments
F1 | Schumacher, Ilott & Schwartzman To Make F1 Practice Debuts
22 comments
rF2 | Ferrari 488 GT3 Talk 'n' Drive