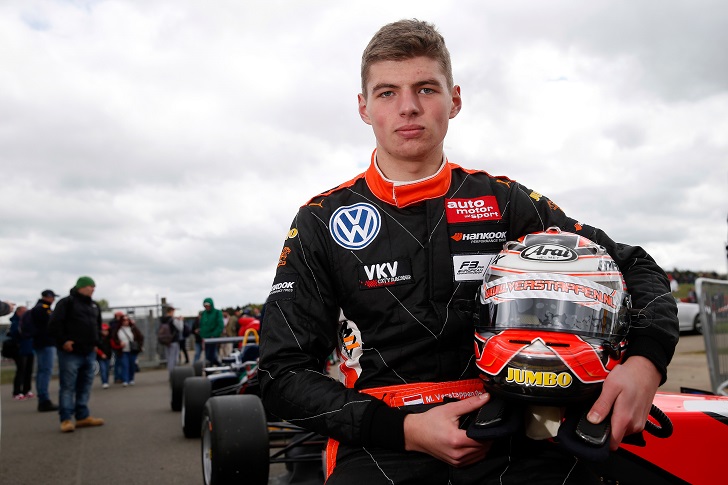 According to the latest rumours the son of former F1 driver Jos Verstappen is becoming the youngest Formula 1 pilot in history if Toro Rosso confirms a seat for him in 2015.

Max currently competes in Formula 3, after winning almost every race he competed in during his karting era and secured the prestigious Zandvoort Master of F3 title this year. A race won by many of the recent Formula One aces.

His strike rate thus far in his career has been very very good. But he's too young for F1 IMO.
The difference between F1 and F3 is astronomical. Not saying it can't be done, but it's a massive shock to the system.

Wish him the best of luck, if he does end up competing against a feisty Kvyat (because lets face it, Vergne has been having yet another anonymous season).
W

i think its to soon for him,, but he races very good. sometimes little to agressive just like his dad.
kimi made a big step too when he joined f1,so it can be done.
and winning masters this year was little easier with only 8 cars, but he is a great talent

I hope this kid does well, but it'd be a shame for Felix Da Costa and Sainz Jr to both be overlooked again.

Felix Da Costa should have Kvyatt's seat in my opinion
H

I think he'd rather leave F1 than go to either of those teams personally.

Caterham won't leave F1, not for a couple more years with these new investors

I've been following his career since he started in cadets karting throughout the past years. Last year he had an incredible winning streak in karting setting some new benchmarks with several major titles both European and World Championships. I've already been waiting until this subject would pop up here.

This kid is a natural talent, when he started openwheelers he did a season in the Florida winter series in February/March coming straight from karting he gave the Ferrari academy talents like Fuoco, Latifi a real go on track. Verstappen also performed different test with F2.0 teams and it all headed into the direction that he would step in that class for this year until he did a F3 test with Motopark at Valencia setting a new lap record with I think a German F3 car finding out that the F3 car suited him much better. After that it was decided to step into the completive field of Euro F3 which is a very close field. After his recent streak of 6 wins it all went very fast, it didn't stayed unnoticed especially for a kid who is racing open wheelers for about 8 months now.

As for the move, I am not sure personally I thought even F3 was to high for him and he would only fight for 4th to 10th spot. But he has been driven like he has been in that car for a full season, making a very quick and easy adaption to these cars.

The question now is, is F1 really a step to far ? It has been done in the past, it didn't happened much but remember Kimi I think he had only one year in F2.0 or something, before he got into F1. Even his own dad Jos Verstappen, yes he got also very quickly in F1. years of karting, one very successful year of German F3 and then into F1 with Benetton (although for him it went to quickly) But Kimi got WCD at some point.

Bottom line is now and then you have a exception of the rule, maybe Max is one. I advise everyone to watch back the 2nd F3 race at the Norisring. He showed a bit of (well maybe I should not mention but I do) Senna likish driving in the wet raping everyone with almost 1 second faster in lap time in the wet. Its those kind of races when you see the talent excel from the exceptional drivers, and obviously this didn't stayed unnoticed to the team owners.

Personally I don't think they will jump straight into F1, it seems like his preference is with Mercedes but the question is what can they offer Max. Also Helmut Marko seems to be a huge fan of Max and offered him a seat in Toro. But if I have to say it, I think it will be more like this.

I think he could be a 3th driver for RBR/Toro Rosso, perhaps do some test days during winter and then drive in GP2 or F3.5 (with backing from a F1 team) for 2015 to jump into F1 for 2016. That's my feeling but then again, when you get such a chance anyone would take it. So Im not surprised if he will be on the F1 grid next year.

One thing is for sure with this kid, when you have followed him, see his results and how easy he adapts and progress. Its not a matter of if,...... but more the question of when he will be in F1.

Verstappen is linked to only the junior programmes of two F1 teams, not an F1 race seat in 2015.

Jimlaad43 said:
Verstappen is linked to only the junior programmes of two F1 teams, not an F1 race seat in 2015.
Click to expand...

No probably not for 2015 but dont be suprised to see him in Torro for 2016. It seems most likely a year F3.5 and then F1 with Torro but you never know what will happen as there is some competition in the RBR young driver program.

At least we can stop speculation about wich program he joins as today it is announced that he joins the RBR young driver program. Today they also performed a test in a F3.5 at the Red Bull ring.

So Red Bull backing, thats a good sign its now all up to Max to show what he is worth.

It's officially now, Max has a Torro Rosso seat for next year.

Jimlaad43 said:
Verstappen is linked to only the junior programmes of two F1 teams, not an F1 race seat in 2015.
Click to expand...

Guess what I'm having for dinner tonight

Toro Rosso ✔ @ToroRossoSpy
Our 2015 Driver Line up: @Dany_Kvyat and @MaxVerstappen3. We want to thank @JeanEricVergne for all his hard work. pic.twitter.com/ZtopIAv6RW

Fantastic news Now we need to think of a cool nickname for Max like we had for his dad Jos the Boss.

So, as the title said, the french driver Jean-Eric Vergne will be replace by Max Verstappen next year in Toro Rosso, what do you think of that ?

IMO, I think it's too early to put him in a F1, seriously he is making is first year ever in a Open-Wheel championship this year (if we don't count karting years), and he is just 17yo, it's ridiculous ! Mainly when you know that Carlos Sainz jr wait for 2014 and 2015 seat and he had to wait again. I hope Vergne will have a seat for 2015 because he deserve it !

(Sorry for my bad english)
You must log in or register to reply here.