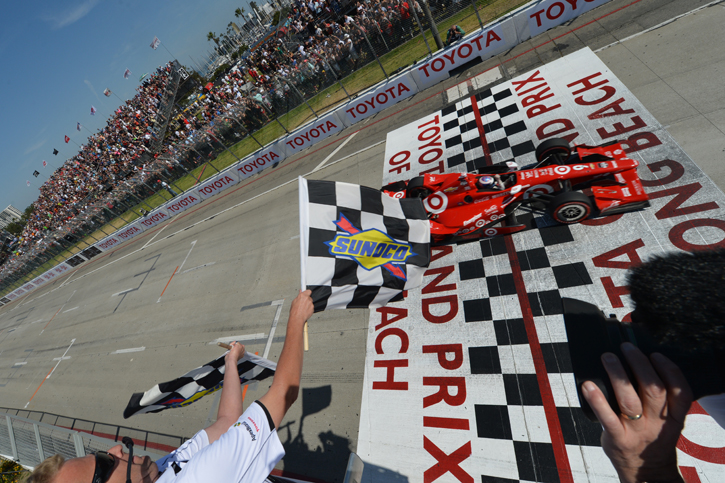 Scott Dixon took his first win of the 2015 Verizon IndyCar Series season Sunday at Long Beach, ending a lengthy and perplexing run of futility at one of IndyCar's most historic venues for one of the sport's greatest champions.

The race ceremonies began with an emotional lap around the Long Beach circuit for Sam Schmidt, the team owner and former driver who was rendered a quadriplegic after a testing accident fifteen years ago, in a specially-prepared Chevrolet Corvette similar to the one he drove around Indianapolis Motor Speedway a year ago. Once legendary actor Sir Patrick Stewart gave the command to start engines, it was truly on - or rather, engaged - at one of IndyCar's greatest events. 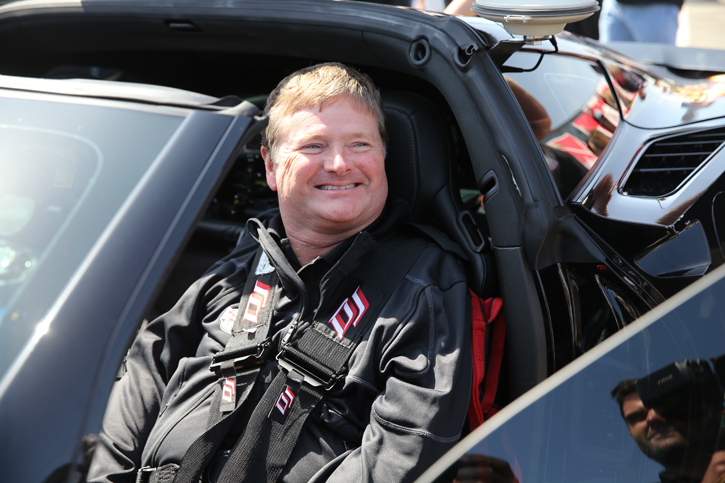 On lap 29, polesitter Helio Castroneves entered the pits along with several of the other front runners, including Dixon. But just as Castroneves was set to be released from his pit stall, Tony Kanaan was entering for his pit stop, holding Castroneves in his stall just long enough for Dixon to get ahead of him on pit road and eventually move into the lead that he would not relinquish but for three of the remaining 51 laps. Using all of his skill and consistent pace, Dixon would beat Castroneves by 2.2 seconds to take his thirty-sixth career victory in American open wheel racing, moving ahead of Bobby Unser for fifth on the all-time list.

Prior to this weekend's race, Dixon had only recorded one top-five finish at Long Beach in nine previous starts dating back to his rookie year in CART in 2001. 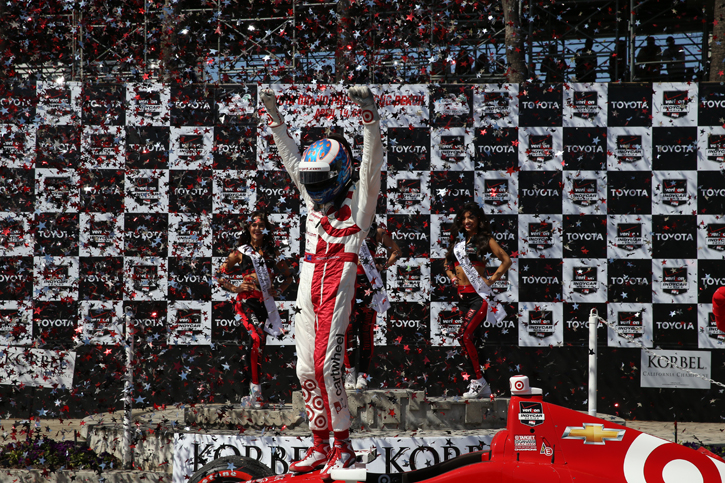 Juan Pablo Montoya will once again leave as the championship leader after finishing third place while holding off a train of cars led by his Team Penske teammate Simon Pagenaud. Despite driving the last laps on blistering tyres, Montoya's experience advantage allowed him to hold off a desperate Pagenaud, who would settle for fourth place just ahead of Kanaan, and sixth-placed Sebastien Bourdais. Montoya now holds just a three-point advantage in the championship over Castroneves. 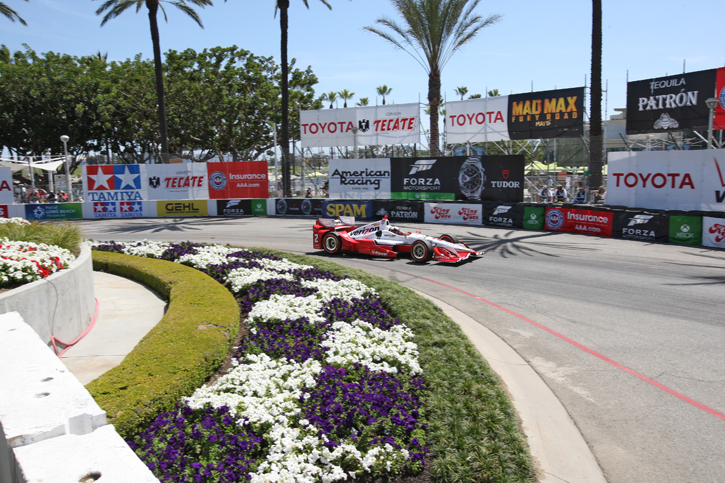 Josef Newgarden finished seventh, one place ahead of the top-ranked Honda driver Marco Andretti in eighth, then Andretti's teammate Carlos Munoz in ninth, and rounding out the top ten was Sebastian Saavedra, a journeyman driver making his first start for Chip Ganassi Racing in relief of a struggling rookie Sage Karam - a top ten finish in his first drive in over seven months should not go unnoticed.

Nor should Conor Daly, who just twenty-four hours prior to the start of the race, was only being strapped into the #18 Dale Coyne Racing entry (pictured below) for the very first time to replace an injured Rocky Moran Jr., a sports car veteran who himself was drafted in at the start of the weekend to replace a disgruntled Carlos Huertas. A seventeenth place finish may not seem like a huge accomplishment for Daly, but under the circumstances, including that this was his first IndyCar race on a road or street circuit - he finished on the lead lap and drove a mistake-free race, something many of the series' rookies have struggled to do all year, most notably his Coyne teammate Francesco Dracone, who once again displayed lackluster form that was far closer to Arnd Meier than Alex Zanardi. 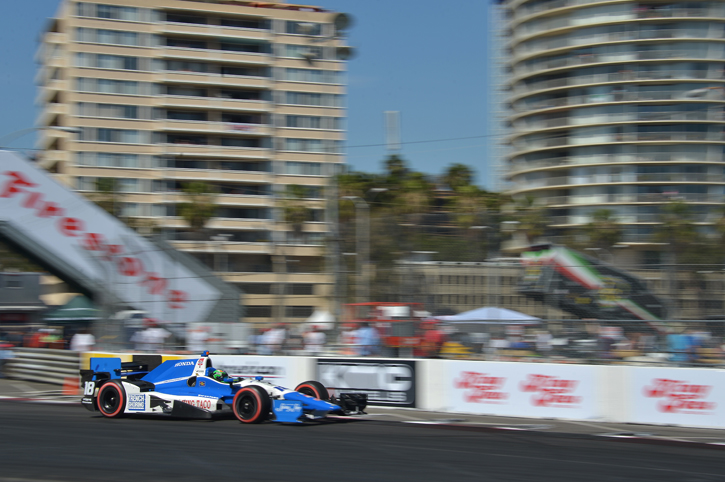 Inaugural Indy Grand Prix of Louisiana winner James Hinchcliffe finished twelfth, ahead of defending Indy 500 champion Ryan Hunter-Reay in what proved to be another rough outing for Honda's fleet at a technical street track.

It was a weekend to forget for reigning Verizon IndyCar Series champ Will Power, who finished way down in 20th place, one lap down, after his car stalled entering the pit lane in an awkward incident triggered by Luca Filippi stalling his own car on pit entry. Yet, unlike last weekend's event at NOLA Motorsports Park which was bombarded with full-course yellows and saw only thirty minutes of green flag running in a race that went to the maximum 1:45 time limit, Long Beach saw only one full-course yellow all race long that allowed a capacity crowd to enjoy mostly clean and proper racing.

The Indy Lights series was the only step of the Mazda Road to Indy in action this weekend at a race meeting that was jam-packed with other racing action from the Tudor United SportsCar Championship to the Pirelli World Challenge. Once again, it was Carlin driver Ed Jones who came away victorious, claiming a third consecutive victory to open the 2015 season.

Next weekend is the Honda Indy Grand Prix of Alabama, which will be covered on location at Barber Motorsports Park in Birmingham, Alabama from the perspective of a cozy general admission seat. Ryan Hunter-Reay is the two-time and defending winner of this event.
Reactions: Bram Hengeveld, Keith_G, Chark and 2 others
S

You must be kidding right? This was published on the frontpage on Tuesday while the race was on Sunday.

Don't want to know what's going on in the world: unplug that internet cable.

Thanks for the report. It was a very entertaining race and didn't have too many caution periods.

It was a nice improvement over the caution-fest that was NOLA. I know a lot will probably complain about the lack of passing, but I absolutely love watching drivers try to set up for a pass in tight conditions such as Long Beach. Aero-kits look epic, I hope Honda can close the gap and Hinch can win another race soon.
Reactions: johnnymat

I can't understand the hype surrounding this race, long beach was always a boring track to me! and this race was really boring!