Hello, I'm from Germany and would like to buy my first setup.
I've only driven with a controller so far and don't know much about steering wheels and co. yet, so I'm dependent on help.
I hope I am right here and you can help me.

It would be very helpful if you could give me some recommendations.
I want to use the setup mainly to learn drifting. (on PC)

I am grateful for every recommendation.
Have a nice day 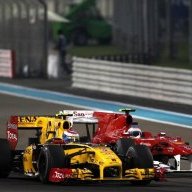 G29, with Thrustmaster Handbrake
B

I dont think that you can use a handbrake with the G29. Or am I wrong.

BloodWorksHD said:
I dont think that you can use a handbrake with the G29. Or am I wrong.
Click to expand...

Not sure about the TM, but I used the Fanatec with my G27.
It was separate and connected to USB.

BloodWorksHD said:
I dont think that you can use a handbrake with the G29. Or am I wrong.
Click to expand...

I'm not sure whether the Thrustmaster is USB or not, but you would be able to get an adapter and use it as a standalone USB that you can map and it will work perfect

You plug in the thrustmaster as a separate USB device. All serious games work with multiple inputs without problems
G29 is fine, I used a g27 for about 4 years. Same wheel in the end...

I absolutely hated the rattling of it and the deadzone around the center but it's solid and got nice pedals! The stick shift is like Playmobil. It works but feels shabby.

You want an h-shifter and an analogue handbrake?
The t8pa from thrustmaster can be both but ofc not at the same time. Thrustmaster doesn't have a real handbrake though. Only the expensive sparco sequential shifter that can be used as a handbrake.

The cheapest, solid setup:
Used g27. 3 pedals, same wheel just a bit louder than the g29 but very reliable + fanatec handbrake.
Would be all you need but no great feeling!

A t300 with the 3 pedal set would give you a way better feeling. Not as nice pedals but absolutely fine. Wheel feeling would be a lot better. Smooth, quicker spinning etc. Just not as reliable though...
Plus point: you can plug in the t8pa shifter directly into the base.
That would be beyond 400€ though...
Without the fanatec handbrake yet...

I would strongly recommend against cheaper wheels than t300 and g27/29. They won't spin quick enough for drifting! They have such a high internal resistance that it's just hindering the beginning of the drift. I'm speaking from experience with a logitech dfgt of a friend.

I just upgraded to a fanatec csw 2.5 and that wheel spins so quickly that I have to activate the internal friction setting to make it controllable. It's quite a bit easier to control the drifts with it though compared to my g27!

Hope that got you some useful input
Reactions: BloodWorksHD 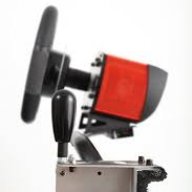