Help modifiying models.ini (adding planes and birds to some tracks)

Hello. I am trying to add planes and birds to my favourite tracks (Nordschleife, Deutschlandring, Feldbergring and Fonteny). I have found these objects in the following tracks:

Then I have edited each models.ini file, adding the [DYNAMIC_OBJECT_*] sections, numbered after the last one found in the file, and calling the .nk5 object.

The problem is with the information in these sections. There are some lines which I don't understand. As a consequence, I am having difficulties to make some objects appear in the tracks, or maybe they appear, but far beyond my sight.

[DYNAMIC_OBJECT_0]
PROBABILITY=100 ; I guess this means the chances of the object of appearing when you load the track. 100 = always?
MULT=1,1 ; no idea
FILE=350.kn5 ; the object's name
POS_MODE=RANDOM ; random placement of the object within a certain range
RND_POS_CENTER=2000,3500,-10000 ; I think this is the distance to the track, or the car. I know the value in the middle is height, but are the others left and right? And why can the height be negative in some examples (underground?)
RND_POS_RANGE=0,0,0 ; does this means the placement is always the same?
VEL_MODE=RANDOM ; random speed
RND_VEL_BASE=50,0,240 ; something about the speed of the object.
RND_VEL_RANGE=0,0,0 ; something about the speed of the object.

If anyone could explain these parameters, it would be very helpful for me to understand how to place objects. I have been able to see some planes in the modified tracks, but not as often as I would expect, no matter if I duplicate the dynamic objects. As regards birds, I have never seen them, only in the original Feldbergring and always in the same place.

What I would like is to see planes in random positions, some distant, some closer, some very high in the sky, others not so high... With birds, I would like them flying over the track or crossing it, giving the feeling that these roads on the countryside are full of life, which get scared as you drive with your car.

AC coordinates are XYZ = west, up, north as a base point, but some tracks rotate x/z. Velocity's meters per second in each direction (xyz again)

It just picks a number from +- the range randomly. so range 0 means there's no randomness. You can't set the heading, so stuff like planes will generally not use random velocity, only balloons will.
Last edited: Dec 20, 2020

Stereo said:
AC coordinates are XYZ = west, up, north as a base point, but some tracks rotate x/z. Velocity's meters per second in each direction (xyz again)

It just picks a number from +- the range randomly. so range 0 means there's no randomness. You can't set the heading, so stuff like planes will generally not use random velocity, only balloons will.
Click to expand...

There are some apps (Shaders Patch Debug adv, for example) that show you the camera position. With F7, fly to whereever you need the coordinate from and the app will show you the numbers.
All values are relative to the world's origin at 0,0,0.

After many many tests I still don't understand how this works. I have tried with just one plane, setting it at the exact coordinates some meters ahead of my car at the start of a track and about 800 m high and when I load my track no plane is visible there. I had to duplicate the animated objects many times and set random values, some lower, some higher, some negative, some positive, etc. Now I can see some planes, but basically at the start of the race. Does this mean that the planes are displayed at the start, fly away and you will never see them again, or do they reappear from their original position every now and then, or maybe when a track lap is completed? And is the direction of flight also random?
Last edited: Dec 30, 2020

Say you want your balloon to appear here: 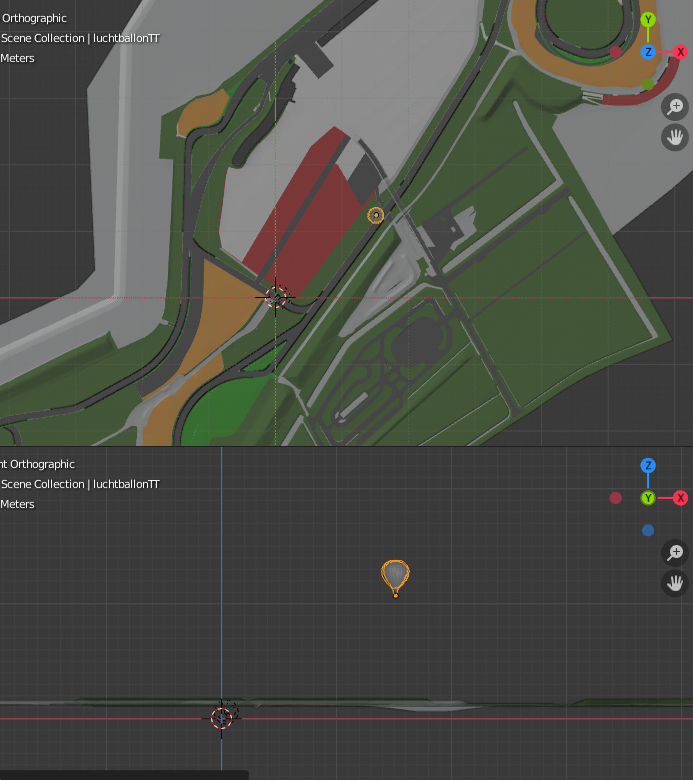 Code:
It will now be stationary and appear every single time at that very same point.

Then you could set a random location:

Thank you for the detailed explanation. I will try with a balloon and see if it actually appears where it should. Then I will change the reference to a plane.

Plane or balloon shouldn't matter. Although a plane needs some rotation in the right direction. Just make sure the objects have a correct origin location.

For planes circling (following a path), you could also use the functions for animation provided with CM

NightEye87 said:
For planes circling (following a path), you could also use the functions for animation provided with CM
Click to expand...

Can you please elaborate more on that? I haven't noticed anything about animating objects in the Content Manager menus. I'm sorry but I have no idea about making or modifying tracks. All I have done is to copy some files (planes and birds) from some tracks to my favorite tracks and add the references to the animated objects in the model.ini files.
Last edited: Dec 30, 2020

I'm not too familiar with the CM/CSP side of things, either.
But one of the latest tracks by Lilski and John, as well as the latest Goodwood, use it a lot. Also on cars driving around the paddock.
I know it requires ksanim files which can be easily created via the ksEditor (animate an object, export as FBX with animations included, import FBX animation, export, etc.).

But yeah, I'm not an expert on this

After-images in void and on transparent textures

How to remove track markers/plot points in game