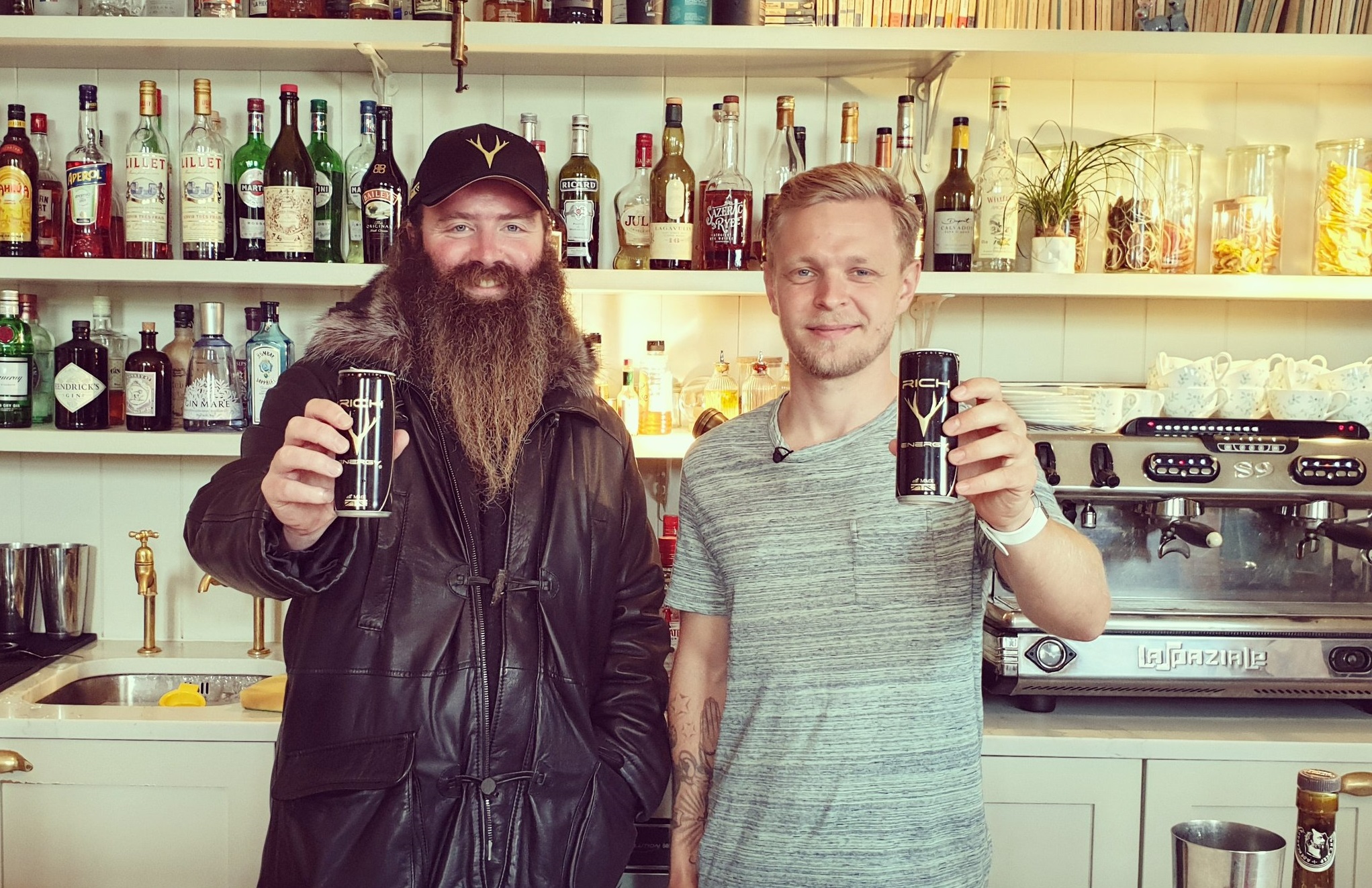 At the start of the 2019 Formula One season, the American Haas F1 outfit announced their new partnership with title sponsor Rich Energy. But in the last few days, the behaviour from the Rich Energy twitter account has become an abusive and conspiracy theory-peddling slew of rubbish, which must surely be leading Haas to question their relationship with their little known partner.

Rich Energy describe themselves as "a premium and innovative British energy drink painstakingly developed and optimised over the last 6 years". Their logo appears to be the head of a stag-like figure; a logo that has become the centre of a legal issue for the company, but we will touch on that in a bit.

Question marks were raised during this past weekend’s Canadian Grand Prix when the logo for Rich Energy was mysteriously removed from the two Haas cars before the weekend began. Not too many people thought much of the removal, as hey-ho, it’s just a sponsor, and teams are forced to change the appearance of their cars all the time to suit the laws and requests of the country in which they’re racing. Take Bahrain and Abu Dhabi for example; teams with alcohol sponsorship are required to remove the logos and distinguishing colours from the cars and team kit in order to comply with the laws of their country.

However, Canada is a progressive country and no such restrictions apply. So why would an energy drink company be requiring the F1 team of which they are a title sponsor, to remove their logos?

On the 14th of May, Whyte Bikes successfully sued Rich Energy for the illicit use of their trademarked logo. Poorly adapted to look ever so slightly different, but none-the-less, a clear case of plagiarism, as can be seen in the picture below. Oh, and in case you were wondering, Whyte Bikes has been around since 1999. So they have 20 years of copyright on Rich Energy. 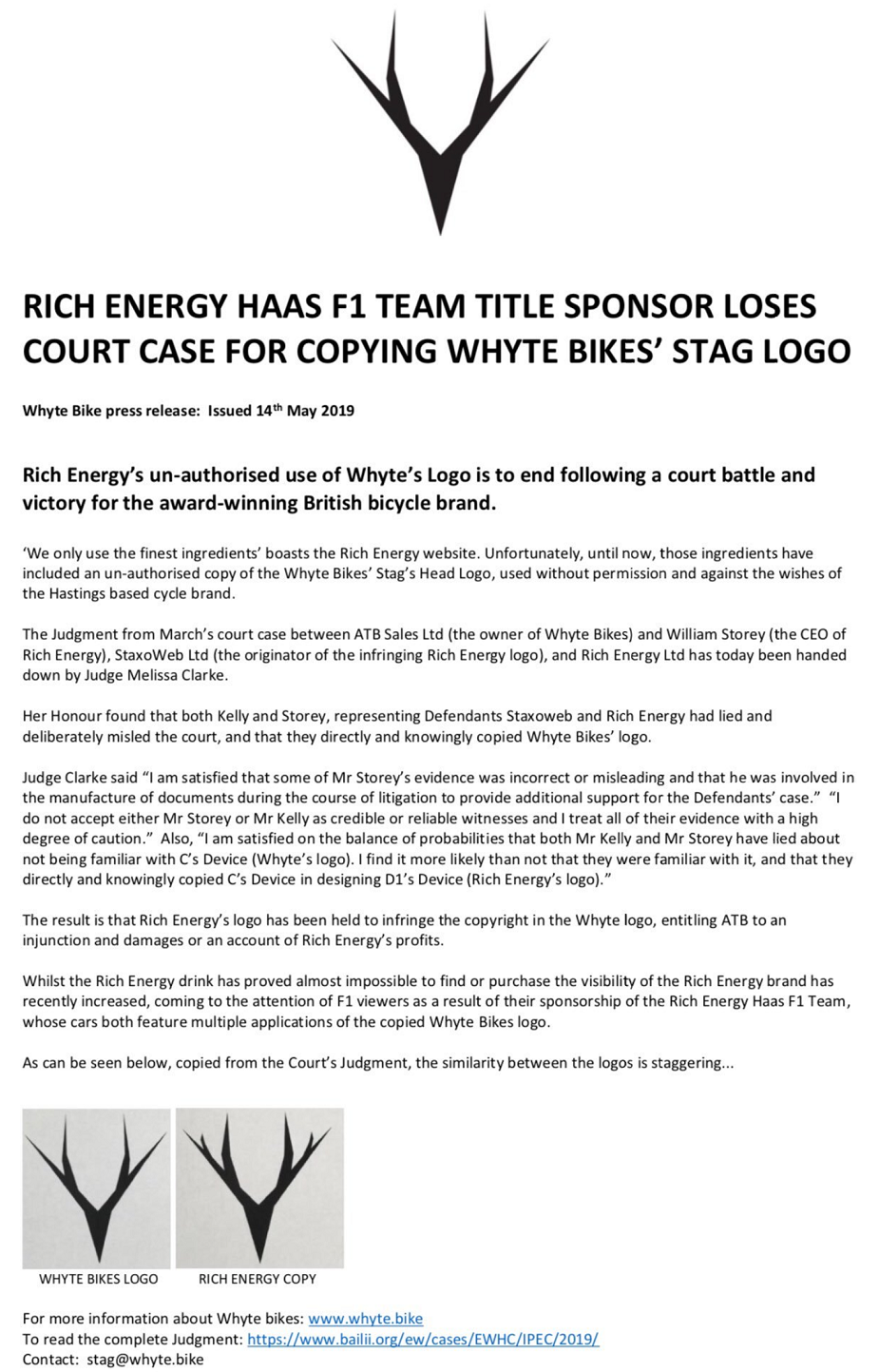 What’s interesting here, aside from the fact that they blatantly stole from another company, is the Judge’s comments regarding the actions from none other than the CEO of Rich Energy, Mr. William Storey.

“… Mr. Storey’s evidence was incorrect or misleading and that he was involved in the manufacture of documents during the course of litigation to provide additional support for the Defendants’ case.”
Click to expand...

In other words, the CEO of Rich Energy lied and deliberately mislead the court and fabricated documentation in order to help his case. Clearly, the jury, and the judicial system in general were able to see through it, and Rich Energy subsequently lost the case, resulting in the removal of their rights to use the Whyte Bikes logo on the Haas Formula One cars. However they are seeking to appeal the ruling at a later date in court.

Okay, so a company lost a court case. It happens pretty regularly. But here’s where this gets interesting… Or hilarious, whichever way you want to look at it. Whyte Bikes enjoyed the win in court, and subsequently tweeted a photo of their company logo appearing in conjunction with the Mercedes F1 team on a large digital billboard, on the side of a building. Clearly this was a bit of a jab at Rich Energy.

Now, the person that Rich Energy has employed to run their social media accounts, namely their Twitter account, has started to sound more and more unhinged from reality, to the point of becoming borderline abusive and insisting on conspiracy theories. Many people have questioned whether it is Storey himself running the twitter account, which honestly wouldn’t be too far-fetched considering the President of the United States has full control of his twitter account and behaves in a similar manner. The Rich Energy twitter account noticed this tweet from Whyte Bikes and responded the only way they know how.

In case you’re not aware of who Chris Harris is, he’s the current host of BBC’s Top Gear, and has been a motoring journalist for several decades, rising to prominence in the wider community through his brilliantly made “Chris Harris on Cars” videos. Certainly for me he provided a great source of inspiration to go and drive the same cars he was driving, within the comfort of my own home thanks to simulators such as Assetto Corsa and Automobilista.

Harris notices the largely maniacal tone of the Rich Energy PR department and decides to give the Haas F1 Team’s twitter account a little nudge to let them know that, hey guys, something pretty weird is going on here, you might want to take a look.

The response from the Rich Energy account is where things really start to take a nosedive for the supposed “premium and innovated British energy drink” company, as they respond to Harris’ tweet in the most childish of manners, somehow claiming that Chris Harris was responsible for the Ultima car brand not being given a fair go against the likes of Porsche and Lamborghini for some on-track testing. Something that never actually happened, and even if it did, it was something that Rich Energy are claiming happened so long ago, Chris Harris was not even a part of Top Gear yet.

Of course, Harris being the classy guy that he is, takes the high road and remains polite, replying that “you just have to settle back and enjoy the madness!”. Even the likes of Jason Plato and Marino Franchitti chime in to back up their fellow racer and confirm that we’re indeed not crazy in thinking that what this Rich Energy PR person (or CEO, who knows?) is coming out with is something that would otherwise have you fired from a PR position in minutes.

If we dig a little deeper however, there have been widespread claims that Rich Energy don’t actually have any product to sell, as many people are asking where on earth can this stuff actually be purchased? Not that you’d actually want any, but it’s a bit like chasing the Loch Ness Monster. It’s the achievement of having found the unfindable. People say it exists, but no one can actually find any proof of its existence. You can of course order it from their website online, but many people have reported that their orders simply never arrived. This is all despite the fact that Rich Energy claim that their product is available across hundreds of supermarket chains.

Funnily enough, the oddities of this organisation doesn't stop there. Rich Energy say they have "a 50 million pound manufacturing facility", however when you look for their address, the only one they have available, this is location you are greeted with.

This has prompted many to wonder if Rich Energy actually exist? Or if they're just a big scam, trying to create their own business by sponsoring an F1 Team, and making money in reverse order, rather than having a product to sell and endorsing products through their earned reputation.

This entire situation is creepy beyond all measure, and I very much doubt that Haas will make any comment on the situation unless they decide to ditch Rich Energy completely, which looks unlikely considering they already have their money.

So while the 2019 season hasn't been tremendously exciting on the track, rest assured, the off-track stories may be the defining feature of this years Formula One Championship.

Guy on the left looks to have more energy than guy on the right. lol

I’m a graphic designer myself and the first rule is to check whether the logo you made was already made by somebody else in a similar way. In this case I cannot imagine that two designers accidentally made nearly exactly the same logo so imo this has to be a copy-paste-job. If your company is really small then be it…but if you happen to be on a F1 car it’s really stupid.

I'm 100% sure the person behind their social media is William himself! because all the tweets and their contexts are the exact reflection of him!
B

I said it when they first joined the motorsport world: they are a scam.

Why does this remind me of Seinfeld? Oh wait.. it's a "company about nothing.”

With all this mess I think authorities should investigate where the money is coming from... just saying

Seeing that guy on the left I’m breaking in sweat. Gosh it’s summer around here.

Is this some kind of money laundry ?

Now the next question on my mind, where did their sponsoring money come from?
Can hardly imagine a solid investor would pop such amounts of money without having a product to sell globally.
Was black money invloved that needed to bleach trough promoting a fake product?

Do they have money at all?

Sharjeel said:
Why does this remind me of Seinfeld? Oh wait.. it's a "company about nothing.”
Click to expand...

Hum... I think you are on to something.

Will Mazeo said:
With all this mess I think authorities should investigate where the money is coming from... just saying
Click to expand...

That is quite a rabbit hole. If authorities begin looking into F1 sponsorships it will be the end of the sport.

Chris Harris is right. Haas need to disassociate from them ASAP. It might put off future potential sponsors if this goes sour.
The logo is pure blatant plagarism though. 2 mins in Photoshop.

In another thread some simple research did show that behind this socalled company there are about 3 pretty wealthy guys supposedly trying to find a way to spend their money.
At least one of these guys have some obscure relation to russia.
Hehe but my guess is that Mr Haas has secured his sponsership payment before allowing Rich Energy to be painted on his cars.

Conserning Magnussens expression on the photo it doesnt really look like he is enjoying himself with one of his best friends.

EDIT: I stand corrected it was not "some obscure relation to russia".
It was to Croatia.
Hehe I dont know if that is better and more trustworthy.
Last edited: Jun 14, 2019

You can order a case of this stuff right now at Walmart.com.
Whether you receive the goods or not I don't know.
I do know I built Walmart stores for 15 years and met many of the buyers. These guys do not play and all products are researched and verified before any agreement is entered for shelf or internet sales.
For fun I just ordered a six pack for $13.99 says it will arrive here in Florida on June 24th. I'll let you know.

According to thoose who actually have tried Plagiarism Energy, it tastes like discount Red Bull.

the whole Rich Energy Brand is really a very weird scheme, as a private person you can yourself arrange your own energy drink, there are companies filling and printing some small numbers for you.

So maybe this is all just some weird ad campaign.

I hate the fact that Chris Harris is going full BBC though, with all that disassociate crap.

Rich Energy seems to be the fulfillment of ACME (A Company Making Everything): They produce everything as much as they do energy drinks
You must log in or register to reply here.