1945. The war is over. At last, the war is finally over. So can we race again ? Like before ?
A year later, the A.I.A.C.R. changed its name to become the famous F.I.A., and started to work on an open-wheeler championship to be launched in 1950. Formula One was born. But what if history was slightly different ?

Welcome to the Grand Prix Legacy Manager II forum game. In this game you’ll be playing your own Grand Prix team which will try to leave his mark on the World Grand Prix history. You build and develop your car, you sign your drivers and you try to win races and championships during several decades.

PART I : The Giant Draft

GPLM History will start in 1950. You've already created your own Grand Prix teams. Now you should sign your drivers to enter the very first World Grand Prix Championship ! But before that, I wanted you to sign participate in the Giant Draft.
Some explanations...

What I disliked in every game I've run here is the fact that the best driver are changing teams more often than any other driver. I also don't find very fair that the guy who currently has Senna has a chance in 1991 to get Schumacher.. then. Hamilton in 2007 etc..
I've always considered that this game should offer fun, periodically, to each manager. Everybody deserve to be great, at least once in history. And many times, great comes with a great driver. If you can't get any, you'll certainly won't make history.

So before we launch the actual game, every manager will participate in a Giant Draft where you'll pick your future "Franchise Drivers". They will be drivers that you'll get when they arrive (Senna in '84 for example) and who you'll be allowed to keep longer that other drivers. You'll make them rise and become champion, they are YOUR legends ! I don't want to bother you with the rules I've set so I'll make it quick "every 5 seasons, all contracts are reset (in 1952/57/62/67etc..). Your franchise drivers will be signed for 5 years + the remaining seasons until the next contract reset. (as an Example, Jackie Stewart will be signed for 7 years when he'll arrive in '65.)"

Of course, the concept is cool if you get guys that you love more than just the best ones you can get. Who's your favorite driver ? Who you'd like to try to get him a WDC ? But also if you get guys that fits your team. I believe the best german drivers should go mainly to a german team ; those kind of things.
Last edited: Jul 20, 2021 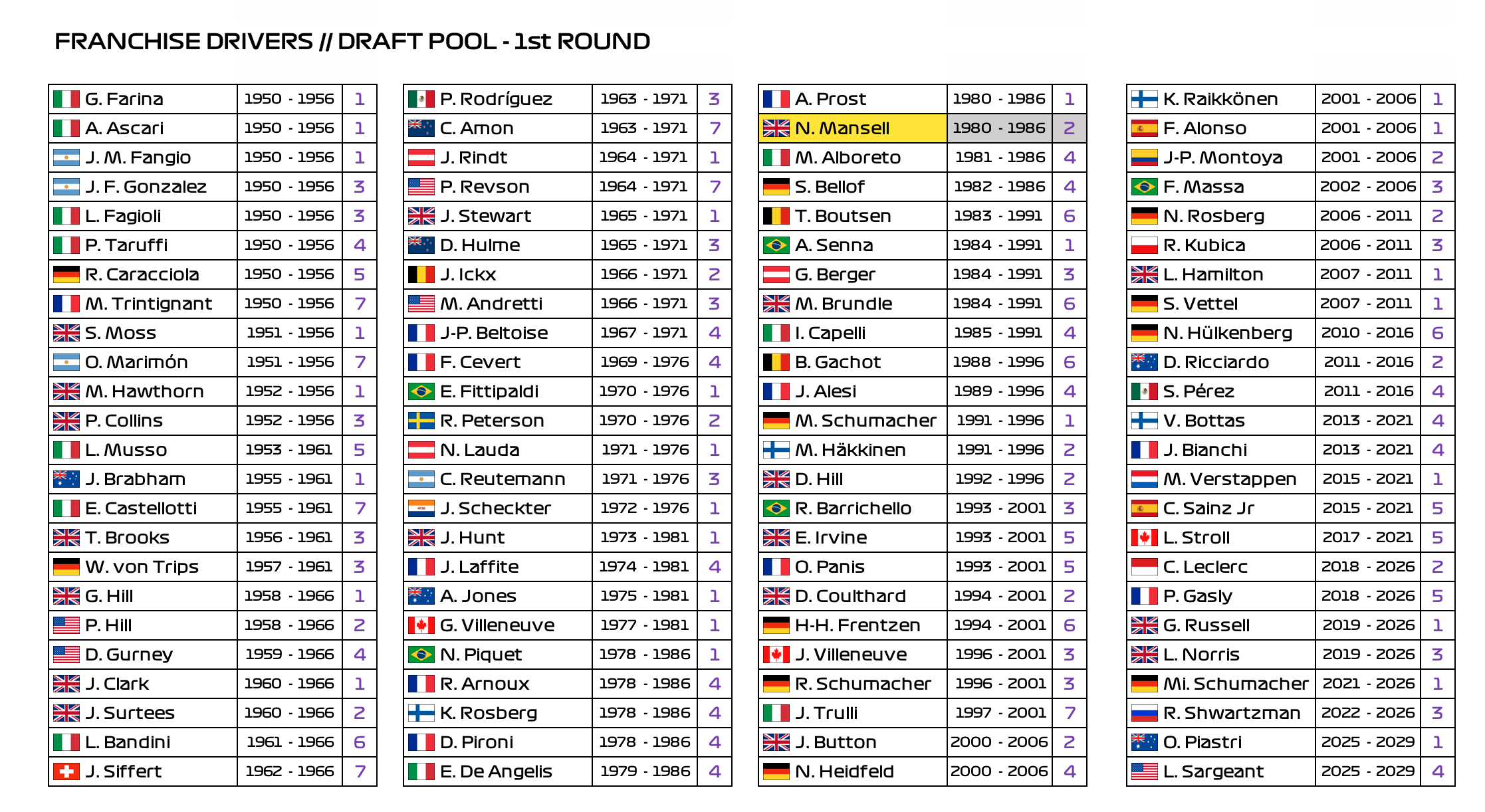 We'll proceed in several rounds and in a "serpentine way" (the #1 spot to pick during 1st round will be last spot for 2nd round etc..).
In the picture here you can see the minimum amount of years each driver will be signed when he arrives in Grand Prix. Plus a number in purple which is the "rank they get at best at some point". Didn't find an easy way to explain it but you should read it this way :
Example - at some point in History, Jenson Button is, the 2nd best driver among all on the grid. It doesn't mean that it's necessary when he gets his peak but it's often the case.

Think that you won't be allowed to sign 2 guys at the same time. Of course it will be impossible to get more than 2 or 3 drivers who didn't race during the same period. But If it's only for 1 or 2 year at the end of their career then it should be ok. No one will be able to get Prost & Senna. Basically you should get one guy per decade/era. I'll tell you if your second choice creates an issue with your previous picks. Send me your names/wish-list in PM No deadline, take the time you need, and let's discuss in our conversations !
Last edited: Jul 21, 2021

And last but not least, should we go for the Dark theme of RD this time ?
I've always used the white one but recently went on black.
Do you guys did the same or not ? Should my pics be made for the dark theme or the bright one ?

Eh, screw PMs. As I'm first in the list let's make it easy for the rest of you. My first pick is Mansell.

Jimlaad43 said:
Eh, screw PMs. As I'm first in the list let's make it easy for the rest of you. My first pick is Mansell.
Click to expand...

In the same time, I tried several scenarios and I realized you guys will be stuck very very quickly with the rule "you can't have two drivers who race at the same time". So as long as you don't get Hamilton & Vettel (both comes in 2007) or Raikkonen & Alonso (both in 2001), there should be room to get 2 "overlapping" drivers. 3, however, will remain absolutely impossible.

And by the way, to speed up the overall draft process, you could send me more than just one name. Make me a list of the guys you'd like to get through time. For example : Ascari - Rindt - Jones - Senna - Button - Russell
This way I could give you 3 or more drivers at once
Last edited: Jul 21, 2021

I must admit I like having the draft in the open like this, but let's please speed it up.

Oh I didn't realize I have to share here. I thought it was up to the managers whether to send through PM or not.
Then writing here:
Stewart
Last edited: Jul 26, 2021

Omer Said said:
Oh I didn't realize I have to share here. I thought it was up to the managers whether to send through PM or not.
Then writing here:
Stewart
Click to expand...

I think Meff intended it to go through PMs but Jimlaad decided to go public to make it easier for lower picking managers (cries in 9th pick ) and then everyone followed. I approve tbh

If it keeps going at this speed we'll still be at it in a month.

Hasn't everyone sent a big list in PMs anyway, so Meff can speed it up in the background. I just wanted to make sure everyone knew my first pick seeing as there was no risk of my pick being chosen.

Jimlaad43 said:
Hasn't everyone sent a big list in PMs anyway, so Meff can speed it up in the background. I just wanted to make sure everyone knew my first pick seeing as there was no risk of my pick being chosen.
Click to expand...

Some did. Others didn't. Some made a list that "works" and others not. I think we'll have to work it "round by round" but indeed it has to go faster. I'm still waiting for a name (knoc knoc @the_sigman) right now.


But as the 1st round is almost over. Here is the rule for Round 2 :
To force you to pick guys from a different era, you will have to make sure that both your pick didn't race at the same time. No overlapping years for second pick !

My bad for the big delay earlier on, was really busy with work

1st Round over, now get someone who won't race during the same years as your 1st Pick
As you can see here I've written the years each driver in this list is considered as "active". Basically it's their entire career according to my ratings sheet.
Last edited: Jul 28, 2021

Rule for Round n°3 : Overlapping years are allowed as long as it is 3 seasons max per driver.
You must log in or register to reply here.