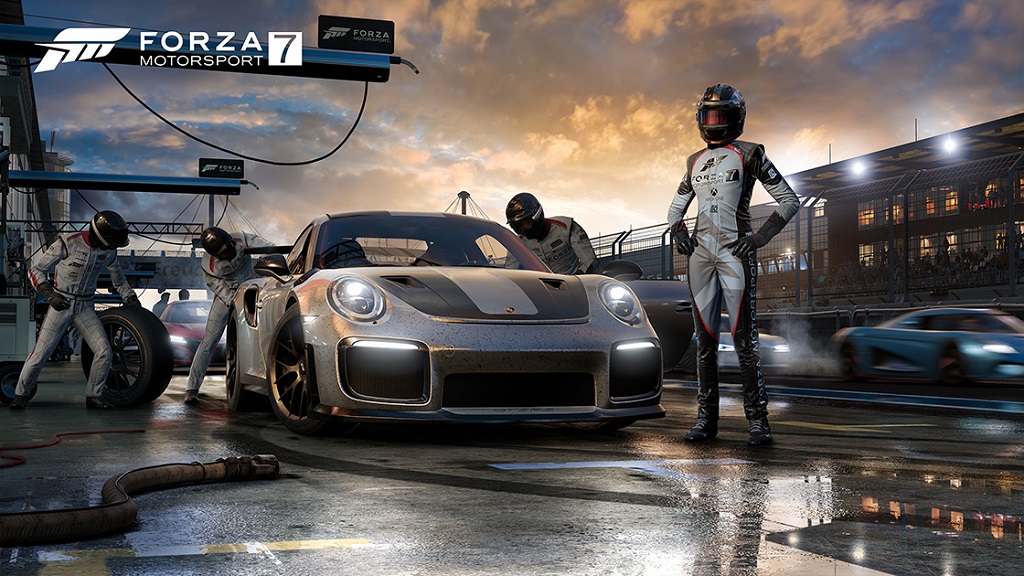 As one of the most popular and successful games of the Xbox franchise it is perhaps fitting that the latest version of the racing game has received a flagship console specific update, and it comes with plenty of improvements to what is already proving to be yet another popular addition to the long standing Forza Motorsport game brand.

Although the update "contains the Xbox One X version of Forza 7, including all the beautiful enhancements that will allow players to enjoy the biggest racing game of the year in stunning native 4K, including high-resolution assets. With brand new graphical improvements like improved lighting and shadows resolution, this update lets Forza Motorsport 7 unleash the power of Xbox One X", it should also be noted that players not fortunate enough to be enjoying the game on the upcoming new console should still see improvements to their core gaming experience, of which Turn 10 have revealed more in the update notes below:

The Update
Today’s update brings with it a suite of anticipated features. Our online multiplayer playground is expanding with fan-favorite features like Drag, Tag, Virus, Keep the It and Pass the It, offering new ways to challenge and compete with friends and rivals alike. Auction House is also returning, allowing players to once again wheel and deal with the community in hopes of scoring a sleek new ride or a windfall of credits. We are also happy to announce the return of #Forzathon, where players can race around the track in challenging events to win prizes, including exclusive cars! Keep an eye out for the #Forzathon events to get started next week.

Today’s update also introduces a massive list of improvements and fixes in the game. Foremost among these is a focus on PC performance and stability improvements, including fixing numerous in-race crash instances, soft locks when viewing replays, as well as addressing many general stuttering issues across all areas of the games. In addition, this update also has addressed several known memory leak issues related to browsing upgrades and car painting.

In addition to focusing on PC performance and stability, we’ve included lots of improvements across all areas of the game – from improvements and fixes to cars and tracks, to multiplayer enhancements that will improve the quality of the MP experience for all players.

Update Notes
PC
In addition to placing a focus on stability and performance on PC across a wide spectrum of hardware configurations, today’s update features numerous specific improvements, listed below.
Multiplayer
With new modes lighting up today, including Tag, Drag, Keep the It, and more, we’ve got more ways to enjoy Forza 7 than ever. In addition, we’ve made some specific improvements to our multiplayer, such as changing the default chat setting for players in a party, menu performance and stability enhancements, and more.
Cars
This update contains fixes and improvements for numerous cars in the game; from audio and camera improvements, to handling updates for a pair of cars that were previously experiencing strange behavior when damaged.
Fixed an issue where Forza Edition cars were not granting XP or CR rewards in multiplayer races.
Tracks
Livery Editor
We’ve made some specific improvements to livery editor performance with this update. In addition, we’ve made improvements to livery mask issues on a wide selection of cars in the game.
Drivatar
Forza Driver’s Cup
Rivals
Free Play
Split Screen
Audio
Driver Gear

Forza Motorsport 7 is available for Xbox One and PC now.

What are your impressions of the new Forza update? Happy with the game? How does it compare to its racing game rivals? Let us know in the comments section below!
Last edited: Nov 3, 2017
Sort by date Sort by votes

Did they fix the waiting for cars crash in multiplayer? really annoys the hell outta me
Upvote 0 Downvote

Game is now a CTD-fest for me...
Upvote 0 Downvote

Game runs way smoother for me now. Though they do need to still do some optimizations so I can actually set the graphics to where they should be. Something I've noticed and how I avoid CTD's is by setting graphics to Medium for when I'm making cars (painting, tuning, customization's, stickers).
Setting to Medium reduces the memory leak buildup speed, as its all based on texture size.

I am very positively surprised by this game.

It has multi-controller support which i didn't expect, so i can use all my peripherals. Something that prevented me from buying WRC7 for example...

In addition the FFB is actually decent. Of course it is not comparable to Raceroom or AMS but since i expected something similar then Forza Apex i was pleasently surprised. The cars feel remarkably different, the Honda Civic Type R has remarkable less FWD-feel as other FWDs, just as the testers described it. Muscle cars have that floaty feel...it's surely not the selling point of the game, but unlike Forza Apex or other Simcades it's not a dealbreaker anymore.

I don't have performace issues or crashes despite a rather weak system by todays standards (i5 4670, gtx970). Game looks stunning and has stable FPS.

I am a huge street car fan so the huge variety of street cars was the selling point for me, something no sim offers unfortunately. This game is the next best thing to satisfy my need.
I even have the AI set to agressive and have no problems mostly. If they have a quirky moment which happens every other race i just hit the rewind button and keep on as if it never happened. They race you hard, defend properly and throw it in the inside.

If you only have 30 or 45 minute time windows this is the perfect game for 1 or 2 quick fun races. My go-to offline game now
Upvote 0 Downvote

does run a lot better though it was running pretty good for me from the start with the occasional stutter. Seems to crash less in the menu's but I have still had one crash while selecting a car to sell in the auction house. I have never had a crash while in a race though which is good. Does anyone know when leagues will unlock?
Upvote 0 Downvote
You must log in or register to reply here.