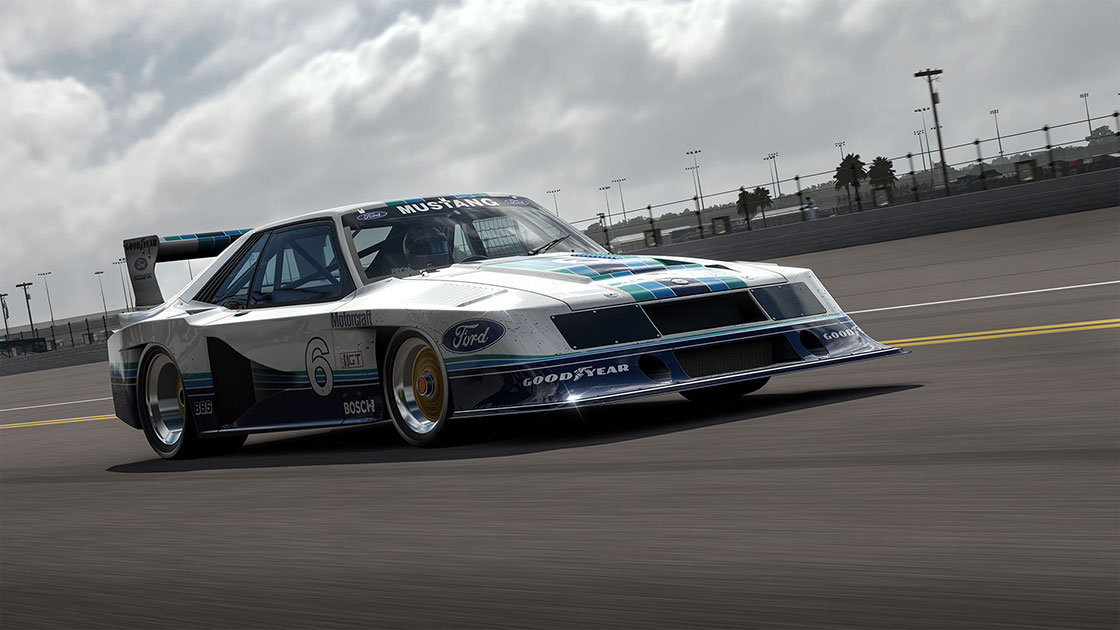 Forza Motorsport has received a significant update, a free car, and access to a once pre order only DLC pack...

The new update is one of the more sizable releases in the lifespan of Forza Motorsport 7, and as such adds plenty of new features and content to the Xbox One X and Windows 10 PC racing game. Bringing new features isn't the only highlight either, the new pack also contains a free car in the form of the historic 1982 Ford #6 Zakspeed Roush Mustang IMSA GT of DRM fame, but also another chance to purchase the 'Hoonigan Car Pack DLC', originally a stand alone pre order bonus pack, and now brought to the game as an additional DLC item (note, the pack will be free as part of the FM7 'Car Pass').

Multiplayer Updates - Multi-Class, Tuning & More
With this update, we’ve put a big focus on multiplayer. Starting off, we’re happy to report that multi-class racing is returning to the game, giving players the chance to race against fields of multiple classes of cars. Multi-class isn’t new to Forza Motorsport 7 but it’s now better than ever, thanks to new features we’ve added to the game, like improved scoring. For the first time in Forza Motorsport multi-class player scoring will now be grouped by the player/class bucket. For example, if you’re racing in Class C vs. Class A lobby, all players will be scored according to the bucket/class they are in. If you’re grouped in the Class C cars, your scoring will keep track of how you’re doing in that class and the end-of-race podium will show off the top three finishers within that particular class/bucket.

We’ve also introduced per-bucket timing triggers in multi-class. For example, you could set the slowest class bucket to start the end-of-race timer, as opposed to the fastest class.

You’ll be able to try out the new spin on multi-class racing for a test drive when our new “ABCS” hopper makes its debut soon.

Multiplayer Tuning
In May, we introduced the ability for players to test drive their cars in multiplayer while waiting for a race lobby to finish. This month, we’re giving players the chance to tune their cars when in a multiplayer lobby or test driving their car. When test driving in a multiplayer lobby, you can now pause the game and choose the “Tune” option to make upgrades and adjustments to your car or download new tunes in real time. Once you apply the tune, that tune will be used in the race when you are pulled back into the lobby and set up for the next race. One other highly requested features arrives this month as well – you can now change your Assists in the middle of a multiplayer race. Simply pause the game, go to the Assists selection, and set the Assists as you’d like them before heading back into the race.

More Multiplayer Control
Multiplayer lobby hosts now have the option to password protect their lobbies. In addition, hosts have more control over the kinds of cars players use in a lobby, including forcing players to use rental cars. When hosts set up lobbies, they’ll see new options when setting up the race event, including:
Upgrades – Stock or Any
Tunes – Stock or Any
Ownership – Owned, Rental, or Any

Data Out
We’re opening up a new world for Forza Motorsport 7 players who want to expand their experience. What we colloquially refer to as a “Data Out” feature means that we now output a UDP data stream which players can take advantage of. This is the same data stream that powers the motion sleds we use at Turn 10 and now we’re putting that power in the hands of players. The possibilities here are limited only by the imagination of the developer – from motion sleds to dashboards, data logging, etc. All of the data is sent to a remote machine at 60fps but localhost streaming is not supported.

The initial data structure is designed to support motion sleds. For a look at the current output structure available to players, check out this post on the Forza forums.

Photography - New Panning Focus Mode
Forzatographers, we’ve got something cool for you in June as well. With this update, players can now toggle between Tracking and Panning camera options in Photo Mode. This option appears when players go into Photo Mode and then into “Effects Mode” (Y button on Xbox One controller). Players will see a new option to toggle between “Tracking” Camera and “Panning” Camera in the Effects menu.

So what do these two options mean? The “Tracking” camera is the same legacy camera option that has always been in Forza’s Photo Mode. Here, the Tracking Camera acts as if it was attached to a car moving at the same speed and direction as the focus car. The new “Panning” camera option acts as if the photo is being shot from a standstill (more akin to how a real trackside photographer would work at a real race event).

The differences between the two camera options is best seen when taking action shots. The new “Panning” Camera option offers a deeper motion blur effect than the “Tracking” camera, and is most noticeable on objects in the far background. In addition, focusing when using the “Panning” camera puts the focus on a specific part of the car, giving players easier options to focus on the hood of a car, for example, while the rear section of the car is more blurred. In all, the option to switch between focus camera options gives players more power to create the types of shots they want on the track.

Ford Spotlight Events
As mentioned above, we’re spotlighting Ford this month in Forza Motorsport 7. It starts with the free 1982 Ford #6 Zakspeed Roush Mustang IMSA GT going out to all players with the June update, but it doesn’t end there. Here’s a look at what’s happening in the game for fans of the Blue Oval this month:

Rivals
Take your shiny new Zakspeed Roush Mustang and put it to the test in our Ford Spotlight monthly Rivals event. At the end of the month, everyone who sets a time in the event will win a new exclusive car – the 1981 Ford Fiesta XR2 Forza Edition! Elsewhere, with the Hoonigan Car Pack now available to all players, we’re lighting up a new Rivals event starring perhaps the most famous Hoonigan car of all: the Ford Hoonicorn Mustang.

#Forzathon
With the updates to our #Forzathon system, we’ve got some fun Ford-centric events coming in the game in June, including events starring the 1978 Ford Mustang II King Cobra and more.

In addition to all the Ford fun, we have lots of additional events arriving across Rivals, Leagues, and #Forzathon events in June and beyond.

Do you like the new update? Happy with the current content? Let us know in the comments section below!
Sort by date Sort by votes

Nice, not a bad update
Upvote 0 Downvote
You must log in or register to reply here.