Feedback on my driving

I am relatively new to Assetto Corsa and have mostly driven the BMW M3 E30 Gr. A DTM car (about 2500 km). I am by no means perfect but right now, I can't seem to improve anymore. I recorded a clean lap at Vallelunga classic and would very much appreciate any feedback on how to improve my laptime and especially my driving in general.
When looking at the video, I already noticed some coasting I should get rid of.

I drove with a wheel ( Thrustmaster 150 Pro, Cockpit view, single monitor)
The videos are from the same lap with different cameras.

Aside from generic advice on using the track limits (your car should hit the outside, inside, outside on nearly every corner, except for an immediate 'S' like the first 2 turns) that you can figure out yourself from a video, I'd say you're turning in too early on a lot of corners.
For example on the 3rd corner, you should still be at the outer edge of the track when you come off the brakes. You're drifting inwards a bit much. 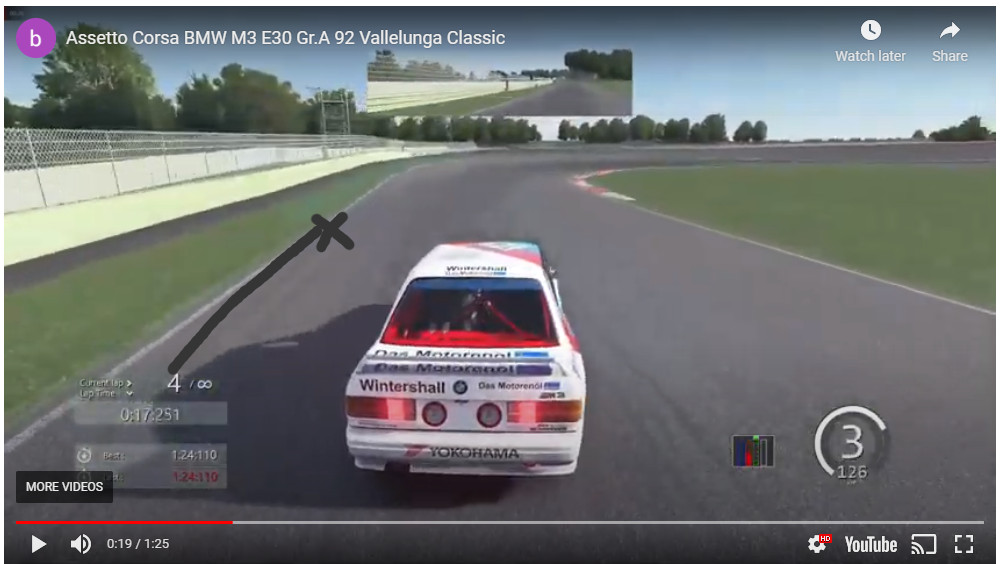 Turning in later opens up the exit for more throttle.

When I tried the combo I had a lot more full throttle and got around a 1:23 without being familiar with the layout, so maybe you also need to accept a bit of wiggle on exits and just be more aggressive with the throttle.

I don't know the turn number but in the corner immediately after the 1st gear hairpin I'd probably just leave it at the top of 2nd, there's not enough time in 3rd to be worth it.
Last edited: Apr 27, 2021
Upvote 0 Downvote

You can always try this method. If you can beat your old time, it mean you're doing something wrong.

Not enough going sideways and making your tyres scream.
Upvote 0 Downvote
You must log in or register to reply here.

Driving at night is too dark! Help please.